I liked the blurb for this book.  The heroine is the daughter of famous CIA agents who have retired. Janey DeMarco works in the family agency that does everything from surveillance to retrieval of kidnapped victims.  Their agency’s services are wide ranging, almost too wide ranging in my opinion. I had a hard time getting a handle on exactly the nature of this agency as if it was deliberately opaque so that the agency would have the mutability to change according to the needs of the series.  In this book, it seemed as if there were only but a few operatives to carry off the extensive agency business. 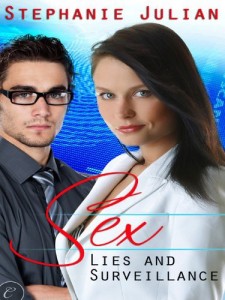 Much is made of the DeMarco parents’ past. They are legendary in the CIA and with other government agencies but their name has appeared in conjunction with gun sales to terrorists.  Malcolm Laughlin is sent in, by himself, undercover to ferret out the DeMarco secrets by posing as a new hiree.  Mal and Janey strike sparks off each other, but given that Mal is lying to her the whole time, their relationship is premised on untruths.  Frankly, the HEA ending didn’t work for me because of the quickness of the resolution given the length and number of lies that Mal told.

I did like the emotional conflicts.  Mal was torn between his growing belief that the DeMarcos could not possibly be guilty and the need to see justice done for his now dead partner who was shot in a botched undercover gun deal. He liked all the DeMarcos, from the parents to the hard ass older brother and the mad genius young brother, not to mention his inappropriate feelings toward Janey.  Janey was frustrated with the mundane roles she played at the agency. Her parents and brothers were over protective and Janey felt stifled by their attitudes and strafed at the familial bonds.  She is being recruited by the NSA to go work in their computer division but she is reluctant to leave the firm, particularly given the recent health scare of her father.

It seems EVERYONE in this book has mad computer/hacking skills  but Janey was portrayed as nothing more than an office administrator. I know good ones are hard to find, but recruited by the NSA:

These days, Janey barely left the office. She sat in front of a computer most days, dealing with clients or various government agencies.

There were some world building details that bothered me.  Why was Janey being recruited by NSA when she was suspected of a serious crime?   I had a hard time believing that the DeMarco’s agency was very good given that Mal could root around the computers, enter a pristine tech lab, and basically steal information from the agency without any one knowing.

The main suspense offered in this story (other than Mal’s snooping) is finding the stalker of a famous movie producer.  The identity of the stalker seemed so obvious or at least the purported agency didn’t seem to do much to discover the stalker except to follow the director around.

Mal and Janey and everyone is likeable and their chemistry seemed genuine.  I’m intrigued by the other romances that are set up and would probably be interested in reading the DeMarco mom and dad’s romance. However, as much as this is a decent read, it didn’t stick with me and I was vaguely unsatisfied by the ending.  C+