“Bronte Talbott follows all of the exploits of the British royals. After all, they’re the world’s most preeminent dysfunctional family. And who is she to judge? Bronte’s own search for love isn’t going all that well, especially after her smooth-talking Texan boyfriend abruptly leaves her in the dust. Bronte keeps a lookout for a rebound to help mend her broken heart, and when she meets Max Heyworth, she’s certain he’s the perfect transition man. But when she discovers he’s a duke, she has to decide if she wants to stay with him for the long haul and deal with the opportunities– and challenges– of becoming a royal.”

The cover of your first book caught my eye at Netgalley and made me, okay it didn’t actually *make me* but it was close, click on the request button. I had just finished another book which features an every day, average woman who falls for royalty and it hadn’t worked so well for me. I was curious to see if this one would do better or if in the future I simply need to avoid all books with the word “Royal” anywhere in the title. 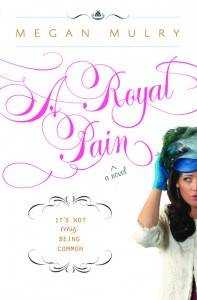 The above book blurb is from your website and I’m not sure if it’s any more accurate than the one at Netgalley. Parts of both of them are a fair description of what goes on in the book but there’s one glaring error in each. Max isn’t royal and by marrying him Bronte won’t become royal either. You’ve made him related to royalty, he certainly has royal blood – thinly at this point – flowing through his veins but he is not royal. Sorry, but that bugged me during all the sections of the book in which it was mentioned. Also, Max’s title is most definitely not Sir Maxwell Fitzwilliam-Heyworth, the Duke of Northrop. It’s only listed this way once, but once is 858 times too many when it’s wrong.

After finishing the book, I pondered what to call it. It’s certainly not Chick Lit. It’s also not really a standard contemporary romance. Nor did it seem to me to be truly women’s fiction. Upon visiting your website to snag the cover image, I saw that the description “sexy, stylish, romantic fiction” is part of the home page banner and that says it all. Romantic fiction. Because there really is quite a lot about the book that separates it from the other subgenres I mentioned. While I would agree with anyone who said, “but wait, it’s filled with fashion, and Bronte as a sexy, single woman living in two bustling cities in the US and it’s crammed with hot sex” there’s still the fact that Bronte is initially hoping for forever with another man. And that the dating of, and hoping for a long term relationship with another man – coupled with a move halfway across country – goes on for a long time with no Max in sight. This is different, I thought. It got even more different when Bronte and Max finally do hook up after a delightful sort of non-dating in a UBS (can I just say I love it that they both love books and UBSs?) and then the usual standard course romance goes in another direction than I thought it would. Oh, and when Bronte and Max meet up again after a separation Thank You for having her look “totally fucking hot” instead of doing the usual heroine pratfall, klutz thing.

The story was keeping me interested and unsure of what was coming next which is a far cry from a lot of books these days. This is what was getting me all tangled up in what to call it. Unfortunately, this is also about the time the book started to falter a little. Not because it was different but because a few things began to happen. Max has been trying to get Bronte to be with him for quite a while. Bronte has resisted for her own reasons which make perfect sense as they’ve been explained. Then suddenly while in the midst of hot sex, he pops the question again and gets her to say yes to marriage, a life together and the whole damn thing. I sat thinking, “Where did her change of heart come from beyond mind blowing sex?” At a later point in the book, Bronte reminds Max that he can get her to agree to anything while they’re having their usual mind blowing sex and the unease I felt with her earlier capitulation raised its hand and waved at me again. Did Bronte really have a change of heart or just a really good orgasm? I never settled that to my satisfaction.

Still Bronte agrees (gives in) to Max’s proposal and suddenly she’s living what must be a fantasy many commoners/untitled people have. Max’s family has more money than Bill Gates (it seems), travels first class, has multiple perfectly maintained stately home properties, plus London digs, plus Max’s little fixer-upper darling mews house, gobs of designer clothes for everyone, plus enough serious BLING in bank storage boxes to make Bronte want to whip out sunglasses to cut the glare. The book hits all these wish list items and while it would certainly be sweet if they could all be true, I couldn’t help but wonder if despite what Bronte says to her friend Sarah, she might have thought twice if Max had a drafty, leaking castle with Inland Revenue issues due to his inheritance taxes as a millstone around his neck. I guess that would be too much reality. The impact of Max’s fabulous lifestyle on Bronte is also somewhat dimmed by the fact that Bronte is doing fairly well for herself. She has a great job that she loves with a sweet income that allows her to have a nice apartment in NYC and wear great clothes.

Max is also so totally, madly in love with Bronte. She actually has no idea how long he’s been so in love with her and determined to have her. The only thing that kept it from heading into creepy territory (one time Max tells Bronte that as far as he’s concerned she left him standing at the altar when in fact, as Bronte points out, he had never even mentioned marriage or any HEA at this time) is that Max also seems determined to win her over, at her own pace and not just haul her off and isolate her into loving him. He does put up with a lot of prickliness from her and has to reassure her steadily that yes, she will fit into his life and this life. The cross, cross, cross Atlantic flights he takes in one day would be enough to convince me. Good thing Bronte finally agrees too since Max was reaching the gibberish stage. Her ultimate agreement to continue the relationship and move on to marriage came in an almost too literary way – complete with daddy issues she has to work through. Her inner marshmallow-ness over this is in stark contrast to her driven, successful businesswoman persona. Would she have been too much of a bitch without this waffling?

The narrative also tends to wobble around a bit describing things that seemingly have no impact on anything including half a page about the sculpture Max commissions to commemorate his father (we really don’t need to know that much about the sculptor). There was also a lot of introspective navel gazing about Bronte’s father. Some of it was needed but not pages of it. But the major thing it’s missing is more of Bronte being confronted by life as a Duchess. Most of the time spent in England dwells on the perks of it rather than anything – aside from Max’s mother – that might make Bronte think twice about this aristocratic lifestyle.

When the book ended, Bronte and Max seem to be on the same page about their pending marriage and parenthood. The day after the book ends is up for grabs if Bronte’s past behavior is any indication. The wonderful Ritz lifestyle Bronte is entering is straight from Romance Fantasy Land but hey, I’d take the bling and the castle (but only if I didn’t have to worry about the drains or the roof) too. Since this isn’t truly a book about royalty, my self question remains unanswered and since any challenges about Bronte becoming a Duchess are glossed over, this blurb issue is a miss too. C+