I was a tremendous fan of the first of your Gardella Vampire Chronicles series, so I was really excited to hear that you were writing more Gardellas, and intrigued to find they would be set in the 1920’s. 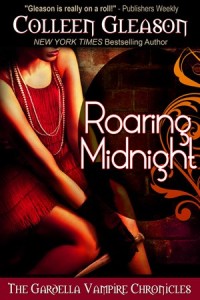 Macey Denton works at the library at the University of Chicago. She lives in a boarding house and is pretty much your typical young woman. But one day she finds a book written by a man named Starcasset titled The Venators. It tells the story of a group of vampire hunters who work to protect the unsuspecting world from vampires and the Tutela, their human followers. Each venator is pierced with a vis bulla, or a powerful silver amulet that gives them stronger than usual strength and an instinct for finding vampires. Macey attributes the strange dreams she’s been having to the book and heads out to a speakeasy with her friends. There she meets a man named Grady who is a newshawk, a reporter, and seems to know a lot about vampires. Their attraction is immediate, but Macey is unsure of why he keeps showing up every where she is. She’s suspicious of his motives, but she’s truly attracted to him, and he does seems to arrive in the nick of time over and over again.

In the mean time, Macey has been approached by a man named Sebastian Vioget, proprietor of The Silver Chalice, who tells Macey that her name is actually Macey Gardella and that she in descended from the greatest of vampire hunters, Victoria Gardella. Macey’s father, Max Denton, was also a very well known venator, but he thought that he could have both a personal life, and fulfill his calling. He was wrong. Macey’s mother was killed by vampires, and Max sent Macey away from him in order to protect her. It’s now Sebastian’s job to convince Macey that she should assume the mantle of venator. There’s also the matter of Sebastian’s legacy, which prophecy says Macey will be part of.

Macey is shocked and frankly, not at all happy to hear that she’s supposed to help save the world. She’s just a girl, and she just wants to live her life and go out with her friends, and eventually get married and have kids. But when a vampire breaks into her rooms at the boarding house in order to kill her, she realizes that she is going to have to accept her legacy.

I’ll be honest,  I wanted to like this book more than I actually did. I’m not sure if it’s because this book has the daunting task of creating a sense of place, providing the foundation for the series mythology and introducing a host of characters and the big bad, but it was alot of talk, talk, talk and background setting. I did like that the book incorporates the gangsters of the time, in particular, Al Capone. If you’ve read the previous installments in the Gardella Vampire Chronicles, there are plenty of mentions of the previous series and of course, Sebastian is back, which is really cool. But overall, this book is mostly setting the stage, and I think could have benefited from more action. That being said, I’lll definitely read the next one, as I think the Gardella mythology is interesting, and I love the setting of the series. Final grade: C+