I’ve been on a sci-fi YA kick lately. It’s a result of my wanting to love the dystopian sub-genre but continually being disappointed by its offerings time and time again. I know these are just marketing labels and can shift based on current trends. (With the success of the Hunger Games movie, I wouldn’t be surprised to see a resurgence in the dystopian label despite all claims of being over the trend.) But I like the idea of exploring non-dystopian concepts in fiction, which is why I gave your new novel a try. 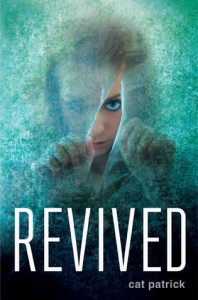 Daisy West, formerly Daisy Appleby, is part of a secret government experiment. As a child, she died in a bus accident. But thanks to a newly developed drug named Revive, Daisy was brought back to life. Of course, this meant that she had to take on a new name and new identity, but it was easier for her than for other members of the secret program since Daisy was an orphan.

It’s been fifteen years since Daisy became a test subject. In that time, she’s died an additional four times. That’s part of the problem with having a drug like Revive around. You know that death can be beaten. Daisy’s careless with her life and takes more risks than she should. Her most recent relocation — and name change — was the result of forgetting her epipen despite having a horrific bee allergy.

But in Daisy’s new town, something changes. She befriends Audrey, the once-popular girl, on her first day of school. She falls in love with Audrey’s older brother, Matt. Through her relationships with them, Daisy realizes that her approach to life is more than a little skewed.

To further complicate matters, the government program is ramping up for the next stage of development. Daisy’s never questioned the agency before. Unlike other test subjects who remained with their families, Daisy lives with two agents who pose as her parents. As a result, she’s always “in” the program one way or another. But now she begins to question everything about it, which is unfortunate because secret government programs like to remain secret.

Despite the sci-fi trappings, I’m not sure I would actually call this a SF book. It’s very soft and I say that as someone who prefers her science fiction less technical. This probably wouldn’t have bothered me if the government conspiracy had been less vague. It’s true that we’re viewing the story through Daisy’s (present tense) first person POV, thus limiting us to what she knows, but there are so many questions left unanswered by the end.

Instead, I’d say this is a book that uses science fiction trappings to tell a story about life and grief. Daisy has always taken death for granted. It isn’t until she meets Audrey and Matt that she’s faced with true mortality. Due to her penchant for fatal accidents, Daisy has moved lots of times and been unable to form any lasting relationships. On top of that, her involvement in the Revive program means that she’s essentially living a secret life and has to keep separate from other people for fear of exposing herself. But she tries something different with Audrey, and that exposes her to some of life’s harsher truths.

I thought the ethical questions about having a drug like Revive in existence were pretty well handled. Revive only works under very specific conditions — namely it works on people that died while having healthy bodies. They can’t have died from a terminal disease like cancer. Likewise, they can’t have died of something like blunt force trauma to the head. The drug basically revives a person to their pre-corpse state, so everything needs to be functional. But who decides who gets the drug and why? Even though the drug has limitations, is it really fair that one person can live while another dies? These are wrenching questions and Daisy faces them through her relationship with Audrey and Matt.

I liked that the book was very honest in its portrayals of how people react to death. It’s helpful that Daisy’s perspective on it is so warped because it gives clarity to the subject. Some people shy away from it. I’m sure we’ve all seen those cases where ties are broken because someone is diagnosed with a terminal disease like cancer. Death, especially impending death, freaks people out. Other people are at a loss about what to do. How to react when someone dies and how to mourn their passing. Daisy’s grief, because she’d never been truly exposed to it before, was a true thing, in my opinion.

While I found the emotional storylines of the book to be strong, I thought the conspiracy part weak. Again, I acknowledge that this is a limitation of the narrator choice. I expected there to be repercussions for when Daisy reveals the truth about the program to Matt. When you reveal the existence of a secret government program, it’s almost guaranteed. But I felt that there needed to be more about the ramping up of Phase 2. We got some hints and details but not enough to warrant its inclusion. In addition, the girl who was inducted into the program thanks to an accidental run-in with the still-alive Daisy — what happened to her? If this were the first part of a series, I would understand all these loose ends. But to my surprise, I think this is a standalone novel (a rarity in the YA world, it seems) so I need a little more closure about the external circumstances than I got.

As a book about showing grief and death, I think Revived does a fairly decent job. If I hadn’t read Fracture earlier this year, I might have been more impressed with it. But there’s too much left unexplained and vague that I can’t endorse it wholeheartedly to readers looking for more YA SF. C+