I saw Mandi from SmexyBooks tweeting excerpts from this book and then she said the magic words. “He’s a dirty talker.” I went right over to Amazon and bought that sucker. There are three things that the reader should know before they start this book. First, Derek Tyler, the hero is kind of an overbearing alpha. Second, Georgia can stand up for herself but likes Derek’s overbearing alpha schtick. Third, the last 20% kind of goes off the rails. Only the first item in the preceding list is a deal breaker. In other words, if you don’t like mouthy alphas, this book isn’t for you. However, if you like a dirty talker, Lt. Derek Taylor is as good as any romance hero in that department. 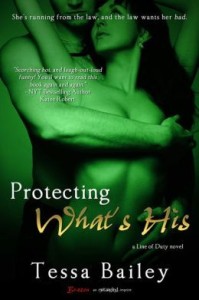 Ginger Peet and her 17 year old sister live with their mother in a dingy apartment in Nashville. Having already given up on herself, Ginger thinks about saving her sister. When she spies nearly $50,000 in cash in her mother’s purse, Ginger only thinks twice before snatching it up and running to Chicago with her sister, Willa.

Ginger had to believe the pile of skin and bones on the couch had once possessed dreams and ambitions of some sort. Then one misguided choice landed her in a G-string and pasties shaking it for some trucker named Dirk to a played-out eighties anthem.

If Ginger could just be a good enough person for long enough, she could flip the script for Willa, though. Willa, who’d skipped the sixth grade, swore like a sailor, and took photographs that could make Ginger cry, would have a chance at becoming something. Someone.

When Ginger and Willa are moving in, they meet Lt. Derek Tyler with the Chicago PD on his way to the funeral of a slain officer.  Derek realizes how inappropriate his “meet cute” with Ginger is given the circumstances but he can’t get his mind off his curvy neighbor.  Ginger’s willing to have an affair with Derek but not much more. She doesn’t always appreciate his high handed tactics while they are seeing each other such as the time that Derek suggested to his officers that they visit this new bar which just so happens to be Ginger’s new place of employment.

Ginger still believes that she’s stuck in the path that her mother trod and this belief is one of the least believable of all of Ginger’s hangups.  [spoiler]Ginger is a friggin’ virgin so why she thinks she will become the drug addled prostitute her mother is doesn’t make sense.[/spoiler]

I really enjoyed the relationship between Ginger and her sister who she calls Wip.  I don’t think we get enough of that kind of sisterly dynamic in romances. Ginger is a sweet, smart mouthed heroine who just wants to do good by her baby sister.

I think what happens in the last 20% of the book is that Ginger tries to gain agency by “fixing” her problem. But Ginger was actively fixing her problem. She moved away from her mother and took her sister with her. She got a job and was able to support herself and her sister. She investigated art shops to see if they would be interested in carrying her decoupage furniture pieces. She did this all without the help of Lt. Derek Tyler. Tyler made her feel good in bed, but she didn’t need him around to function, care for herself or for her sister.

Therefore, her actions at the end were in direct opposition to the smart, savvy woman she had been portrayed throughout the entire book. Instead, she places herself in a situation where she has to be saved. It would have been awesome if we could have seen the two work together toward fixing an issue in Ginger’s life.

What makes overbearing alpha Derek acceptable is that the reader knows that Ginger runs the show. It is because she is turned on by his commands and dirty talk that his actions aren’t offensive. But when Ginger becomes the helpless female the dynamic between the two isn’t so fun anymore. The epilogue rebalances the scales, but if Ginger had been portrayed as a ninny through the first 80% as she was in the last 20%, this book could have easily been in the D territory.

Fortunately, the power dynamic is well constructed in the first 3/4 of the book. It’s breezy, fun, and sexy reading for most of the book. C+