I love a good sports romance, and your Play-by-Play series has thus far delivered some truly entertaining reads. Your fourth installment, Playing to Win, focuses on Cole Riley, a wide receiver for the St. Louis Traders. Cole is a bit of a bad boy, having been released by several teams for not really getting along, and also for some detrimental media interactions. Cole feels targeted by the media and really doesn’t understand why he’s having such a problem catching on with a team when he’s a very productive player. But he figures he’ll turn over a new leaf with the Traders and will get his football career back on track – no big deal. He’s shocked and ticked off when his agent introduces him to Savannah Brooks, an image consultant the team has brought in to fast track his image make-over. Sure, Savannah is gorgeous, but what the team doesn’t seem to realize is what a pitbull she is. She’s pushy and seems more like his babysitter than someone who is trying to help him. More than that, she’s insusceptible to his charms and seems to delight in pointing out the things he’s doing wrong. 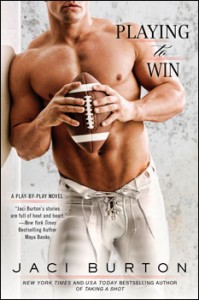 Savannah is sure she can help handsome Cole Riley make over his image. If he would just realize that she’s here to help him, not to babysit him. As Savannah spends more time with Cole, she realizes that he means well, but his stardom has led him to make some bad decisions. He is quick to trust the wrong people and is extremely defensive when confronted about anything. After going to a nightclub with Cole, she understands that he is in hot demand, but is trusting people who aren’t really friends, but acquaintances. She also observes that while Cole is practicing, he’s quite separate from his team. He doesn’t buddy around with the guys, and when he scores, no one celebrates with him. As Savannah works with Cole, she recognizes that it’s not that he’s a nice guy, he just doesn’t connect personally with people because of a wall he puts up. But when she spends time with his family, she finds that Cole is kind and generous and has a funny, loving relationship with each of them.

Throughout all of Savannah’s dealings with Cole, she is fighting a rising attraction to him. Sure, he’s gorgeous, but the longer she knows him, the more attracted she is to his humor and his strong will. Their chemistry is incendiary and they have several highly heated encounters. But Savannah is resolved to keep their relationship professional, no matter how much she wants to jump his bones. Cole has no qualms about getting involved with Savannah, and while he’s a gentleman who takes no for an answer, he pursues her pretty single-mindedly. Will Savannah give in to her attraction to Cole? Or will her need to stay professional impede the obvious chemistry she has with Cole?

There is a lot to like in this book. You do a terrific job capturing the grind of training camp and the work that professional athletes put in to being prepared for games. I liked that Cole truly evolved throughout the story. At the beginning, he really was quite an ass. But as he got to know Savannah, and began to understand why the work she was doing with him was important, he softened discernibly, making me root for their relationship to take hold. As always, you have a really deft hand with sex scenes – they are inventive, plentiful and truly spicy. I wish that I’d connected more with Savannah. I thought that the professionalism she cloaked herself in was really a sham. She was constantly allowing Cole liberties that any true professional woman would not permit. She did not go to the team or anyone else to let them know that her relationship with Cole was no longer only a professional one. She really did risk her job security by getting involved with him. But throughout the story, there was no true risk, no ramifications for her involvement with a player while being paid by the team. She also had a vague family history where she was a foster child, and therefore unable to love or have a true commitment to anyone. But that aspect of the story came so late in the book that it felt like an afterthought, rather than a true plot point.

Overall, I enjoyed the book, and I thoroughly enjoyed having the opportunity to visit with past couples. But I wish that the conflict between the hero and heroine had been more believable, and this is not my favorite installment in the series. Playing to Win definitely stands alone well, although I’d encourage readers to try the other books in the series, as they are tremendously fun reads. I give Playing to Win a C+.