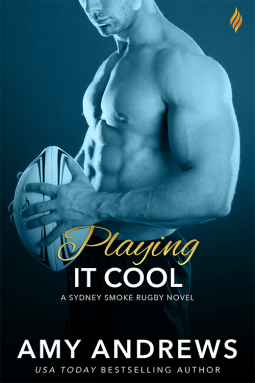 Harper Nugent might have a little extra junk in her trunk, but her stepbrother calling her out on it is the last straw… When rugby hottie, Dexter Blake, witnesses the insult, he surprises Harper by asking her out. In front of her dumbass brother. Score! Of course, she knows it’s not for reals, but Dex won’t take no for an answer.

Dexter Blake’s life revolves around rugby with one hard and fast rule: no women. Sure, his left hand is getting a workout, but he’s focused on his career for now. Then he overhears an asshat reporter belittle the curvy chick he’d been secretly ogling. What’s a guy to do but ask her out? It’s just a little revenge against a poser, and then he’ll get his head back in the game.

But the date is better than either expected. So is the next one. And the next. And the heat between them…sizzles their clothes right off.

Suddenly, this fake relationship is feeling all too real…

As a curvy girl myself, the description of Harper is what caught my eye in this blurb. Still Dex and his mates are initially acting like body part obsessed teens which means he’s got a way to pull himself back up to adult in my opinion. He does recognize that the stunning woman he’s been ogling on the sidelines is the marrying type. Though just what does this “type” look like, I want to know. Anyway Dex is focusing only on rugby in the few good playing years he has left. But he will smack down an obnoxious reporter when he hears him disparage a woman.

Harper loathes her smarmy stepbrother so even if she’s sure Dex is only asking her out on a bet or dare from his teammates, he did stuff Chuck in public so why not enjoy a date with him and pay step-bro back? Their first date is a revelation – to each other and to me. Misconceptions about UpChuck – the players have no respect for him and Hunter hates him – are cleared up and Hunter and Dex discuss her job as an artist doing murals at a children’s hospital. Will her vow to not have sex on a first date remain unbroken? Plus she doesn’t support Chuck in the face of his dickhood just because he’s family. God I get so tired of heroines putting up with shit from family members “just because” in romance novels.

Dex might deny, deny, deny to his teammates about his relationship with Harper but he continues to make time to see her and finds he’s relaxed around her, able to be himself rather than a “rugby star.” She in turn lets him into more of her life than just for sex. Ah but the moment things show a hint of potential seriousness and interfere with his rugby, Dex goes all hyper freak out. Since so far this story had bucked most tropes, I’d hoped to avoid this too. No such luck but at least Harper sends him off with a flea up his ass about his attitude. When he comes crawling back saying things all the wrong way, brava for Harper’s response.

Still, after Harper kicks him to the curb, she realizes she’s in love with him beyond the hawt sex and initial rescue date. I wish I’d seen a little bit more of Dex digging deeper into who she is instead of just being told this happens. Then things really deteriorate storywise. I get where Harper is coming from but not how she very suddenly springs her passionate all or nothing “I love you’s” on Dex. Her and her friend’s plan to show Dex what he’s passing up works but Dex’s equally sudden change to caveman then capitulation doesn’t work for me either though he does do a good public grovel. So a good start which avoids the usual romance pitfalls bogs down in them at the end. Plus a little more time spend in the relationship outside of sex would have helped my C+ grade.