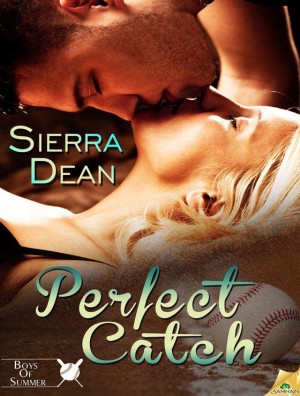 Here’s all I needed to know about Perfect Catch in order to pick it up for review: “Minor league umpire Alice Darling loves everything about baseball.” Done, sold. A minor league baseball setting and an umpire heroine? That sounded like such a great idea that I barely skimmed over the rest of the description. But while the book itself wasn’t bad, but it couldn’t quite live up to my expectations.

Alice Darling works as a minor league and spring training umpire in Florida. She loves baseball and while she realizes that making it to the Major Leagues is unlikely, she feels that her work might pave the way for other women umpires. Alice is certainly not there to date any ballplayers:

Ballplayers were off-limits. That was her one steadfast rule, and she’d had it before she even started working games. There wasn’t a written rule against it because so few women worked in the league, but when she’d started, she’d been told in no uncertain terms she wasn’t allowed to mingle with the players. If she was going to be taken seriously as an umpire, she couldn’t have a reputation for bedding any guy with a nice swing, no matter how impressive his smile was.

Alice’s no dating policy is also due to personal reasons: she was involved with a ballplayer before becoming an umpire, which left her a single mother to nine year old Olivia. Olivia’s father, now a top baseball player, provides financial support but is largely out of the picture.

Alex Ross is an All-Star catcher for the San Francisco Felons (an unfortunate team nickname, I must say), whose spring training base is in Alice’s hometown. The two meet at the beginning of spring training, when she helps him change a flat tire, and hit it off immediately. Alex is very interested in taking things further, but Alice is concerned about a long distance relationship, the implications for her career, and is mistrustful of baseball players in general. When Alex is sent down to the minors after a rough start to the season, they do become involved, and things become challenging. Alice and Alex aren’t ready for their relationship to become public, but that’s not just up to them, especially since they don’t try very hard to be discreet.

Alex isn’t written as a stereotypical pro athlete, which I thought was great. He’s not tall and imposing, he has to work to keep to his target weight, he’s not too impressed with himself, hates exercising and doesn’t feel the need to hook up with every random woman he meets. When Alice questions why he’d want her and not a woman with fewer issues, Alex tells her that other women wouldn’t be her. He has five sisters, so he gets plenty of insight and advice about relationships. I liked that, though I could have done without the sisters’ intervention at the end of the book. Alice has a lot of responsibilities but she doesn’t sit around moping about it and appreciates and tries to make the best of what she has.

I had two major issues with Perfect Catch that kept me from enjoying it more, and they might have more to do with me as a reader than the book itself. First, I was expecting Alice’s umpiring career to play a larger role in the book. There are references to her working games and some interactions with players and her crew, but less than I’d expected, and the resolution of Alice’s conflict of interest was really a letdown. What we do get a lot of is Alice’s personal life: in addition to being a single mom and working two jobs, she has a brother struggling with depression and a difficult relationship with her mother. This isn’t a problem in itself, but I was expecting more sports and fewer family issues, so it didn’t feel like the book I’d signed up for. In writing a heroine with a unique profession, I think there is an expectation that it would be a central part of the book. Alice’s chosen career is one in which it is so difficult for women to succeed that I didn’t see the need to throw in so many personal issues on top of it; she had enough on her plate for two or three heroines. This also meant less focus on the development of Alice and Alex’s relationship than I would have preferred, and the ending felt rushed as a result.

My other problem has to do with my being a longtime baseball fan, which means that I tend to nitpick when it comes to the accuracy of sports romances, especially baseball ones. I doubt that all readers will be equally bothered by some of the things that jumped out for me, but I found it hard to suspend disbelief at times. I’ll mention a few so that other readers can decide for themselves: a west coast team would be unlikely to have spring training or a AAA affiliate in Florida; it doesn’t make much sense that a player at Alex’s level – an all-star catcher past free agency, presumably signed to a massive long-term contract – would be sent down to the minors three weeks into the season for not hitting well (though he might be benched for a while); an umpire would have to travel a lot more than Alice does in order to get to the professional level she’s at, and it would probably be quite difficult to do this as a single mother. There were other things, as well as some incorrect terminology, such as referring to the lineup as the rotation and calling games matches.

I’m willing to accept some liberties with the baseball aspects in order to tell a compelling story, but I think it was possible to tell this one with greater realism and accuracy. Your dedication suggests that you based the fictional San Francisco Felons on the Detroit Tigers, so I’m not sure why you didn’t write about a Detroit-based team.

Perfect Catch didn’t quite work for me, but I don’t think it’s a bad book, and there’s quite a bit about it that I did like. While my own grade is a C+, fans of sports romances might want to consider it and see if it fits with their reading preferences.