I read the first in the unfortunately titled H.O.T. Cops series “Bad Girl at Night.” I meant to review it but failed to do so until recently. Party of Three is the second in the series. I had read a few of your Ellora’s Cave publications previously but found them to be heavy handed and entirely too raunchy for me. I could hear the bow chica bow wow soundtrack play in the background as I was reading them so I didn’t have high hopes for these books. I was pleasantly surprised. These stories read more nuanced to me, with more about the characters and less about the mechanics of sex. 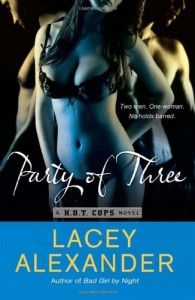 Mira Adams has been dating Ethan West but their relationship has been strained lately as a result of long hours worked by Ethan to make his new law practice a go. Realizing that his work has been distancing him from Mira, Ethan plans a special weekend for Mira’s birthday. Surprise! It’s Rogan. (Yes, only in romantica books is someone’s birthday gift a hot ex boyfriend).

I’m not entirely clear whether Ethan knew much about Mira’s past relationship with Rogan Wolfe but I always considered his choice a fairly big mistake. Mira and Rogan dated for some time prior to Mira having a relationship with Ethan. Rogan didn’t want to settle down with Mira so while he introduced her to true sexual pleasure, he also ended up hurting her. Before Rogan, Mira felt uncomfortable with her body and with her own sexual desires. Under Rogan (literally and metaphorically), Mira blossomed.

Ex-boyfriend, tough cop, bad boy to the bone—and the man who had taught her to love sex. She’d never told Ethan that part about her relationship with Rogan, but while before him she’d liked sex just fine, with him she’d found her true sexual being, and she’d loved how much he’d drawn that out of her. In fact, she credited her good sex life with Ethan—well, before its recent decline—in part to her time with Rogan.

Ethan, Rogan and Mira proceed to have a scorching weekend but their physical intimacy raises emotional questions for all of them. Rogan is older now, more interested in settling down. He remembers Mira fondly and being in close and intimate contact with her is making him doubt his past decisions. He had changed quite a bit and he begins to wonder if Mira isn’t the one he stupidly let get away. Every touch of Rogan’s hand on Mira’s body generates old, very good memories for Mira. She begins to doubt her feelings for Ethan. Ethan is torn between wanting Mira to have the greatest time ever and his own growing jealousy.

The story is meant, I believe, to be a reaffirmation of feelings between Ethan and Mira but so almost equal time is given to Rogan’s point of view. Rogan, more than Ethan, exhibits character changes from detached bad boy and a good lay to someone who is connecting on a deeper emotional level. The emotional scenes that we are treated to from Rogan’s point of view are more powerful and have a better connection with Mira. Ethan is relegated to the side, alternatively questioning his unwise decision to bring Rogan into the picture and then tamping down his well placed doubts. Ethan’s failure to recognize the danger in front of him signaled a man with poor instincts and even poorer insight into his future wife’s psyche.

I appreciated the idea of exploring the jealousies of a menage, but it didn’t go far enough in that direction. Instead, it tried to shoehorn this provocative concept into a more traditional romance. The two didn’t fit and neither the idea nor the happy ever after were convincing. In the end, I concluded that Mira settled, either out of guilt or out of fear. No one but Rogan seemed clear on their feelings for one another and the ending was too tidy for all the emotions that were stirred up. This book had potential and I appreciated a more nuanced look at the popular menage concept. I just wasn’t sold at the end. C+