I love the feel of your romantic suspense books. While not every hero in your books have a law enforcement background, there is a certain paramilitary aspect to the heroes and your extensive knowledge of weaponry displayed through the narrative provides a believable basis for the hero’s competency. But beyond the suspense, I’ve always enjoyed the romantic archetype of your stories which feature a hero that becomes fixated on the heroine and devoted to her safety and well being within a short amount of time. One Wrong Move delivers on those two elements: the familiar romantic archetype and the suspense. Where it falters is in the believability aspect but if a reader can suspend her disbelief and enjoys the types of romances McKenna tells, then this will be a satisfying read. 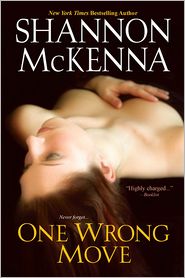 Alex Aaro is a cyber security specialist whose father is a giant in the Ukranian mob. He’s run from that lifestyle, moving to the US with his aunt, enlisting in the Army and serving in the Rangers where he met Davy McCloud. Since he’s been out, from time to time, McCloud would ask Alex to help him out but the last time, Alex made a big mistake which almost led to the death of his cousin’s wife, Lily. He wants to withdraw from helping others. It only results in tragedies. When Bruno calls him to translated a recording left on the phone of a friend of Lily’s, Alex refuses. He is on his way to see his aunt who is on her deathbed. She is the only woman who has ever loved him.

Nina Christie is accosted by her aunt Helga, injected with some kind of substance, and left with a frantic message in Ukranian. Shortly thereafter, her aunt slips into a coma and the only piece of evidence Nina has is the message.

The injection leaves Nina with strange images as if instead of a person’s face, she sees their true identity – evil, good, soulless. She begins to hear the thoughts of those around her and wonders if she isn’t going crazy.

I can’t recall when McKenna introduced the paranormal element into her books but it was in the McCloud brother series. Some people’s extra sensory powers are the result of a drug and in this case, Nina’s powers are brought on by a drug her aunt had been developing under duress. Once the message is translated, it is discovered that Nina was given an A dose of the drug and she needs to the B dose within 5 days or Nina will die like her aunt. The bad guys recongize Nina knows something and pursue her.

Alex gets dragged in against his will and for all his protestations otherwise, Alex can’t leave endangered Nina by herself. The two have a twofold goal: avoid the killer goons after them and find the B dose. Adventure ahoy.

Amongst the gruesome villianry, the romance provides comedic relief with Alex’s bluntly expressed attraction to Nina (and his initial terrible attempts to suppress that attraction) giving rise to a few laughs.

“What makes you think I’m so hungry for attachment”

“So do men.” She wasn’t even sure exactly what they were arguing about, but she couldn’t shut herself up. “Unless they’re damaged , too.”

“Want to know the wird part, though?” His narrowed eyes were fixed on her, hot with fascination. “My dick is hard as cement.”

She jerked back against the door. “Don’t talk to me like that.”

“I’m not usually this bad,” he said. “I mostly keep my trap shut. But I guess, once you’ve killed two guys, dragged a stark naked girl out of a bullet ridden closet and then gone through a drive by shooting with her, you feel entitled to skip the small talk.”

One of the more fun aspects of this story is that Nina is often saving Alex. He’s very capable but oftentimes put in situations in the story that place him in impossible odds and Nina, by being in the right place at the right time, is able to haul him out of danger more than once.

But in order to enjoy these books, one really has to stop thinking.  I didn’t love the ESP aspect.  I didn’t love the wildly improbably coincidences. The insta love between the characters might be a real problem for readers. But before there were self published authors like Kristen Ashley, there was Shannon McKenna whose messy, improbable, over-the-top romances are like candy to me.  C+