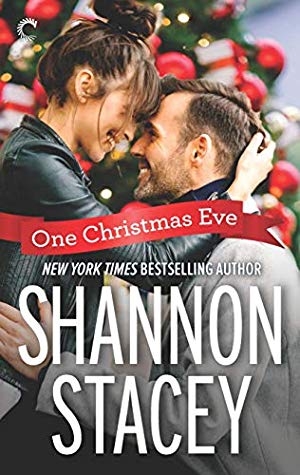 One Christmas Eve is the second novella in your Cedar Street series and features Zoe Randall, the cousin of the female lead in the first book, One Summer Weekend. I haven’t read the first book and it’s not necessary to do so (thought I think I’d enjoy it) – this book stands alone well.

Zoe is a divorcee, having moved back to the fictional small town in New Hampshire where, as a child, she spent summers with her grandfather and cousin. It was always Zoe and Carly’s dream to open a bookshop together and Cedar Street Books was born.

Just after Halloween, Preston Wheeler, a estate planner and lawyer, moves into the office space next door to the bookstore. He’s come from Boston, determined to slow his pace and escape the rat race of the city. He’s a conservative guy, preferring a gray colour palate.

Zoe is in charge of the window displays at the story and she takes great pride in them. The Halloween window featured sexy witches and drew a number of complaints due to it being a bit too sexy for the townsfolk. Unfortunately, Preston voices a similar concern, thinking that the display right next door could impact his business and therefore he and Zoe get off to a bad start.

Zoe’s divorce occurred because her then-husband didn’t approve of her and she’s determined not to stifle herself for anyone.

Both Zoe and Preston are immediately attracted to one another, notwithstanding their inauspicious first encounters.

Preston fears he is too boring for vibrant Zoe and Zoe isn’t sure she’s ready for a long-term relationship so they hesitate before acting on their chemistry.

Preston may look staid on the outside but he’s definitely not Zoe’s ex. He also comes to realise that the colour Zoe brings to his life is a good thing and he loosens up a little as well.  Zoe’s barriers aren’t really about Preston at all – they’re all down to her not wanting to make another mistake.

Zoe and Preston are mature, intelligent adults who, for the most part, act accordingly – something I always appreciate.  What starts as a fling soon becomes more and as Christmas approaches, both characters have to deal with their fears and issues if the want their HEA. I was a little worried that the conflict would go too much into “big mis” territory but I was pleased my fears were ungrounded. That said, what caused the inevitable black moment didn’t quite work for me, though I was happy with the resolution to it. I had also been hoping that Zoe’s “secret” was a little more racy than it turned out to be. That probably says something about me…

One Christmas Eve is a fairly quiet book, enjoyable and sweet if a little predictable. At a little over a hundred pages, it’s quick read; an entertaining and cute way to start the Christmas season.