REVIEW: On the Steamy Side by Louisa Edwards 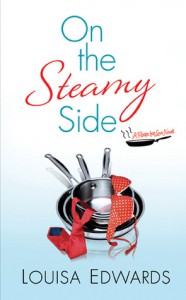 For a contemporary without a suspense aspect, this story moved along at a quick and even pace, never sagging. You have a great touch with secondary characters, making even those that only have a little screen time seem individuals without being caricatures.

The main protagonists in On the Steamy Side seem to be a flip from Can’t Stand the Heat. In Can’t Stand the Heat, Miranda is a prickly character who, for most the story, was kind of unlikeable for me. In OTSS, it’s Devon, the hero, who is the asshole. Part of the problem is that Devon is a superstar chef, known for his reality tv show where he goes into any kitchen, anywhere, and challenges them to a cook off. It’s called One Night Stand with Devon Sparks. So in my mind, I kept thinking Gordon Ramsay.

Devon is tired of being a celebrity chef. He is embarrassed when he is named #1 Chain Restaurant Operator. This will only contribute to the disdain his peers have for him. It also is the nail in the publicity coffin for him. He doesn’t want to be considered a brand. He is a serious chef.

Devon seeks to prove to himself, and everyone else in the foodie community, that he is still a serious and superior chef by standing in for Adam Temple, the owner of The Market. Adam, hero of CStH, has an Alice Waters’ type restaurant offering simple, delicious foods based on ingredients ordered not farther than hundred mile radius of Manhattan.

Devon has a big ego:

Devon glared around the empty dining room. So no one had bothered to roll out the red carpet for his first night at Market. Fine. But was it too much to ask that at least be a peon or two polishing glassware and setting tables? Granted, Devon hated waiters of every size and stripe, but they had their occasional uses. For instance, greeting a visiting chef during off hours and telling him where the hell everybody was.

Devon’s ego is so big that it seemed odd that when his special additions to Adam’s menu failed he wasn’t accusing those around him of sabotage or wasn’t blaming the line chefs and sous chefs for failed execution or wasn’t berating customers for their lack of refined taste buds. No, instead, Devon feels like the flaw is in him.

Now I did understand that Devon was like a wounded bear, backed into a corner trying to defend himself from further harm. Anytime anyone got close, sensed his weakness, he lashed out. Yet, I found the tender, likeable Devon artificial given his original construct. I think we were supposed to see his as both an ego driven maniac and a frightened boy still seeking his father’s approval, yet the two sides didn’t coalesce well for me.

Lilah Jane Tunkle was an art teacher in Appalachia who was a victim of budget cuts. She decides to move to New York City to find an exciting new life. Her best friend is Grant, the front of house manager for Market, and one night at a bar, she gets propositioned by the hottest thing this side of the mountain range. After a delicious one night stand, she heads to Market to meet up with Grant, only to see Devon, her hook up.

She serves one disastrous night as a wait staff only to be kept in close contact with Devon when his ten year old son shows up in the custody of child services. Devon had abdicated all care of his son to Heather, the mother, only Heather was a drug addict and had placed herself in rehab. Devon doesn’t want his son, or so he says, but Lilah Jane demands that the son stay with Devon and Devon agrees only if Lilah Jane will be the nanny.

Lilah Jane is a managing sort, if the previous paragraph didn’t spell that out. She proceeds to manage Devon, undertaking to help him and his son bond together. I didn’t find her manipulative but I did find her convenient. She was all sugar and sweetness to Devon’s spice, amazingly intuitive and usually able to defuse even the most volatile of tempers. At times, I felt that it was a Lilah Jane knows best show. I never really did understand why she came to NYC and what she planned to do with her high school teaching experience.

My favorite parts of an Edwards’ book is the kitchen scenes and the kitchen staff. The kitchen scenes are so vibrant, I can almost see the flash of the knives and hear the sizzle of the saucepans. I feel like I am right there, inside that sacred domain, seeing the success and the failures. And the Market staff and their romances and their breakups and their secret longings kept me glued to the pages. C+

Proviso: This is a Macmillan book so the list price for the ebook is $14.00.

→ Jane
Previous article: REVIEW: Zero at the Bone by Jane Seville
Next Post: Thursday Midday Links: I Worry About Apple’s Propensity for Censorship, Do You?