REVIEW: On the Island by Tracy Garvis-Graves

I picked up your book because it is everywhere lately. The concept of the teen boy-older woman romance is pretty repellant to me, but over 700 positive reviews on Amazon for a self-published book told me I should give this one a try. I read it, and I can see why it appeals so much. It’s a quick, easy read with a sweet romantic storyline at the center. If you’re looking for something soothing and nice, this is the book for you. If you are looking for controversy, keep looking. 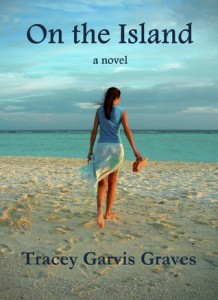 On the Island is the story of Anna and TJ. Anna is a 30 year old private tutor who has traveled overseas for the summer despite her boyfriend’s wishes. She wants to be engaged and start a family, and the boyfriend does not. So she takes a job as the private tutor of TJ, who is a 16 year old recovering from cancer. While on a plane ride over the Maldives, the pilot has a heart attack and the plane goes down. Anna and TJ make it to the island and then struggle to survive.

The plot is a very simple one: stay alive until rescue. TJ and Anna have a hard time adjusting to the island life. There’s no fresh water, they don’t know how to care for themselves, and there’s no shelter. Over time, they figure out how to care for themselves, and as the years pass, they grow to care for each other. Three years pass on the island before they are rescued. I feel like that is a spoiler, but it’s touted as a romance and I don’t think these two could have a happy ending while on the island, so I’m comfortable revealing that.

The romance between TJ and Anna is rather uneventful despite their age differences. TJ of course finds Anna extremely attractive, but he holds this in check and doesn’t touch her or even watch her bathe in the ocean. They’re never nude around each other. They’re very careful until TJ is over the age of eighteen, and then he slowly begins to make moves on Anna, who is reluctant because he’s her student and he’s barely legal. Eventually, however, Anna gives in and they have a relationship. By the time they get off the island, they are firmly a couple. When they are off the island, society questions the relationship between the two and Anna continues to have doubts as to whether she should be with TJ.

I thought it was good that Anna had doubts, as being the reader, I had lots of doubts about this relationship. While it worked for them on the island, when they got back to land, I did wonder how it would pan out, and the author explores this for a time. Unfortunately, once they do get off the island, I felt as if all tension had drained from the book and struggled to finish the last third of the story. It went on for too long. Furthermore, I felt like the conflicts of Anna and TJ’s relationship were easily resolved. Anna was a teacher, and she’s fired, but she is given a settlement, so she’s fine monetarily. TJ’s family likes Anna so there are no problems with the relationship there. It’s just all very…pleasant.

I think that was my biggest beef with the story – it’s just nice. Anna and TJ struggle to survive on the island, but they are given lots of things to ‘help’ them survive. Anna’s suitcase washes up and it is conveniently filled with enough shampoo and toothpaste and such for several years on the island. They use her earrings as fishhooks. No one really has a problem with the relationship other than the media. All conflicts are presented and then quickly dismissed again. Overall, it’s just a nice, easy story. It’s not particularly memorable in my eyes, either. Everything is just a little too pat and saccharine. Even TJ’s cancer, which is a concern for both characters in the time on the island, is easily dismissed once they return.

It’s not a bad book. The cover is pleasant, the typos were few and far between, and the writing style is very easy to sink into. I read this in one sitting and enjoyed it, but looking back on it, I feel vaguely dissatisfied. Perhaps I was looking for more emotional nuance, or perhaps I was just hoping to be blown away like the other 700 positive reviews on Amazon. It’s not a bad read, but it wasn’t a great one, either. C+