I’ve been a fan of your work since the very beginning. Some books work better for me than others, but that’s to be expected from an author with a sizeable backlist. When your Otherworld series ended last year, I wondered what you’d do next. I knew you’d be writing another Nadia Stafford book but was that it for the adult realm? Then one day I opened up my mailbox to find that Jane had sent me an ARC of your latest book, Omens. 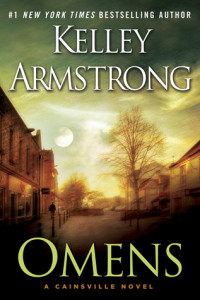 Olivia Taylor-Jones is a privileged rich girl. There is no dancing around this fact. She comes from a filthy, stinking rich Chicago family, has an Ivy League education, and is engaged to a young CEO who’s being groomed for political office.

Then everything comes crashing down around her when tabloid journalists and bloggers break the news that she’s adopted. What’s more, her birth parents were infamous serial killers who murdered 8 people. The scandal and ensuing attention proves to be too much, leading her adoptive mother to flee to Europe (how nice of her) and driving Olivia out of Chicago.

Where she goes, though, is the small, insular town of Cainesville. There she hopes to learn more about her parents’ pasts, in the hopes of making peace with the newly uncovered truth. But her investigation only leads to more secrets, including mysterious abilities that seem to have awakened and grow stronger by the day.

I hesitate to call this an urban fantasy. It takes place in a small town where everyone knows each other (and their business) and where you can’t get a job until the locals get to know you. Small town gothic would be more accurate perhaps. As with all your previous books, Omens has a writing style that’s easy to read. It’s never a struggle and that’s so comforting to me.

Despite the fact that Olivia is so ridiculously privileged, complete with her “Oh, let me help the poor!” deal in the beginning that allows her to counsel them but never exposes her to the reality of their lives, I found myself sympathizing with her. It’s helped by the fact that even after she learned of her adoption, she continued to think of her adoptive parents as her real parents while the serial killers were just those people who gave birth to her. In so many stories, upon learning they were adopted, the protagonist drops everything to find their “real” parents, as if all the years spent with their adoptive parents amounted to nothing.

That said, I also liked that it didn’t gloss over the complications of having memories of your birth parents. Olivia as a little girl adored her birth parents and the news that she was adopted causes all those old memories to resurface. She may not call them her parents, but she loved them as a little girl and those feelings don’t entirely go away.

On the surface, I suppose you could say this is a narrative about a rich girl who gets knocked off her pedestal and is exposed to the real world. I don’t think that’s what this story is doing, however. Not entirely. For one, Olivia’s privilege is called out many times over the course of the novel. There’s nothing stopping her from asking for money from her family other than pride, after all. Nor is there ever a sense that she can really up and leave her new “poor” life and return to her old one. I mean, of course she can leave Cainesville and return to her Chicago mansion. There’s nothing stopping her from that either. But her entire world as changed, based on the perceptions of the people around her, and a person can never go back from that.

The fantasy aspects in Omens are subtle. There are no werewolves or witches here. Olivia’s ability relates to seeing and interpreting omens, actual omens. Omens related to luck, omens related to the weather, and omens related to death. The mysteries of Cainesville are never explained in this book but readers who know their European folklore (or are willing to google a few words) will get a big hint. I found myself preferring the subtle approach here because the branch of the supernatural world this deals with has never been my favorite, I admit.

Despite all this, however, I found myself finishing the novel and coming to an abrupt realization: nothing really happens in this book. Olivia meets her birth mother, thanks to the efforts of the lawyer who used to represent her birth parents. Her birth mother insists upon their innocence and sends Olivia to investigate the circumstances of the last couple they allegedly murdered. The investigation leads to secret conspiracies and then… And then…

That’s kind of the problem, isn’t it? There is no “and then.” The circumstances of the final couple’s murder are revealed and that plot line is resolved, but we don’t learn anything else. Not the mystery of Cainesville. Not the meaning of Olivia’s abilities. Not the depths of the secret conspiracy she may have uncovered. We don’t even learn if her birth parents are actually innocent. Omens is very much a set-up book, and I wish that wasn’t the case. The earlier novels of the Otherworld series were self-contained and standalone, despite being part of a series, and I miss that format. I really wish Omens didn’t show signs of following the pattern set by later novels in your previous series instead.

For readers looking for romance, there isn’t much of one here. There’s an implication of something brewing between Olivia and Gabriel, the lawyer helping her, but the relationship is more similar to the relationship between Nadia and Jack from the assassin books. There’s something there but chances are it’ll be slow to form, and there’s a high probability Olivia will take a detour along the way.

I enjoyed Omens for its intriguing premise and compelling character conflict. What I’m cautious about is the execution and payoff, since recent novels from you fell short for me in this area. I’m willing to stick along for the ride but I’m definitely keeping my expectations in check. C+