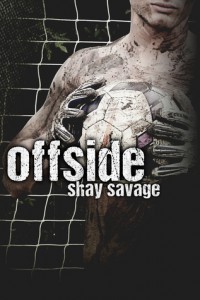 This book has stuck with me though. I refer to it as the negging book. Thomas Malone is a super star high school soccer player who is being scouted by professional teams. He’s also a terrible person. He treats the girls around him like tissue to be used for one use and then discarded. He makes fun of most everyone except for a select few and even his “close friends” aren’t immune from his sharp tongue.

It’s an angst-driven high school based romance with all the drama of Cruel Intentions and all the melodrama of an after school special. I eat these stories up probably because the shenanigans are something so different (and unlikely) than I had experienced.

What set this book apart for me, however, is that Thomas’ character was actually a little more layered than most of the manwhores. He treats people poorly because he’s in a cycle of abuse. His father is abusive towards him and Thomas strikes out –albeit not physically–against those around him. But you see the hand of his father in nearly everything he does even though you, as the reader, and Thomas despise the father.

In some subtle subconscious ways, Thomas understands that he’s influenced by his father’s actions more than he’d like. You see him both as the arrogant man child at school yet the vulnerable scared boy at home. Part of Thomas wants to lead a quiet life but his need to please his father wins out and that need is manifested in fairly objectionable ways.

Nicole Skye has moved to town to live with her father, the town sheriff, because of something that happened in her past. It’s kept a secret for some part of the book and it’s part of why Thomas is intrigued with her…that and she’s really good at soccer. Nicole is a placeholder heroine. She has little personality. I know from the text that she’s good at soccer and fairly good at shutting out Thomas’ negging but that’s about it. Her lack of color is contributed to by the fact that the story is told from Ryan’s POV but the story could have been so much stronger if Nicole was more interesting.

As Thomas falls for Nicole, his father becomes concerned and soon Thomas has to lie about everything relating to Nicole. He can’t even practice with her without his father questioning it. His father tells him to bang Nicole and be done with it. He has to pretend that he’s hitting every random girl in order to turn his father’s attention away from Nicole.  But he can’t stay away from her and all his secrets (and hers) eventually face a reckoning. Thomas’ struggle to be with Nicole and hide it away from his father provided some intense suspense at times.

There’s a big twist in the end–the melodrama. It worked for me because Thomas was already changing and struggling against the person his father was shaping him up to be even before the dark moment. However the dark moment had a big impact on Thomas in an exaggerated fashion. The way that the post dark moments were handled was interesting but I wondered if it would be offensive to others.

Thomas becomes paralyzed after an incident with his father.

According to the reviews, this is a fan fiction based on Twilight. I can vaguely see the resemblance, particularly in the lackluster characterization of Nicole. The author also has Thomas  love Shakespeare and he includes quotes at the end of each chapter. This felt affected and simultaneously served the role of being pretentious and completely superfluous. Thomas’ predilection for quoting Shakespeare was not well incorporated into the story.

This is a story of exaggeration. Thomas is an over the top, ridiculously awful manwhore with a ridiculously awful home life. He’s a dirty talker at the age of eighteen and has sexxed up more high school girls than Casanova. Nicole is the down to earth, kind but smart mouthed opposite. Even their fathers are on the complete opposite end of the parenting spectrum with Thomas’ dad being evil incarnate and Nicole’s father being wholly understanding about everything including Thomas needing a place to sleep other than his own home.

But for all its exaggeration, the dubious origins, and the typical manwhore hero, I enjoyed the book and remember it even though it was one I read weeks ago. It’s an over the top story with a lot of over the top occurrences but it’s larger than life storyline has stuck with me. C+