REVIEW: Off Limits Attraction (The Heirs of Hansol 3) by Jayci Lee 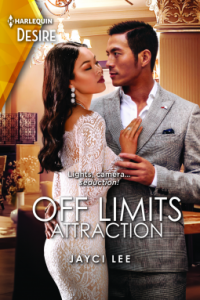 But that’s no reason to stop…

Jihae Park’s icy heiress facade is quickly melting—all because of Colin Song. A fling with the sexy film producer could jeopardize her one shot at achieving her own success—and the movie they’re making together. But resistance to her searing attraction—and Colin’s breathtaking bedroom skills—proves futile. Even as Colin’s ulterior motives threaten to destroy their chance at a picture-perfect ending…

In book three of “The Heirs of Hansol” series, cousin Colin meets up with the “left over from the first book character” daughter of a Korean jae-bul family. In my review of the first book I added a parenthetical explanation of this term to mean “power and influence” but after reading this book I should change that to “POWER AND INFLUENCE.” Unfortunately the book has a lot of reiterating of things we’ve already been told (which I expect to some degree but this was egregious) and scenes we’ve already seen.

Since this is a Harlequin Desire line book, I knew I would “Be transported to the worlds of oil barons, family dynasties, moguls and celebrities.” Here we’re talking about the Song family – thought by some to be merely parvenue, upstart rich – vs the Park family who are “old school mega-world wide influential, have a finger in every pie, can destroy your business without even breaking a sweat” rich and powerful.

We first see Jihae Park acting as her father’s flunky at the US locations of some of the many businesses owned by the Park family. Daddy Chairman Park says jump and everyone goes stratospheric to please him. Do not get on his bad side. Jihae has learned this since she was a child and except for a few brief stolen moments of freedom, she’s (reluctantly and never truly to her father’s satisfaction) tried to toe the line. His reach is such that even half a world away, she feels as if he’s watching and breathing down her neck.

In order to stay in control of one of the businesses – a production company based in Los Angeles – she’ll play the part of the icy “Princess Jihae” down to letting a stylist choose her look – always in white with her hair in a chignon. Knowing she’s breaking into the business, Jihae realizes she needs to partner her company with someone with contacts who knows the lay of the land.

What she doesn’t realize is that the top contender to help her bring the business up to the next level is part of the Song family that her father tried to marry her into. Colin Song has already conquered the LA nightclub business and made millions but he wants to concentrate now on helping make films. Feelers from her business meet interest from his and soon they’re in business together to produce a romcom film about Korean Americans that both hope will increase diversity at the box office and help convince Hollywood that it needs this more.

Both have reasons to ignore the powerful attraction between them which both go ahead and ignore anyway. Jihae has to tread a fine line with her father in order to keep her sliver of freedom while Colin wants to take advantage of working with her in order to do some spying to clear up the issue of who tried to spy on Hansol and get all up in Garrett’s private life (see book 1).

Colin’s revered grandmother immediately points out what I immediately thought about what he plans to do. What if Jihae discovers what he plans to do – what will that do to the partnership? Colin – in spectacularly stupid self delusion – announces that even if she does, she’s a professional and they will still be able to work together. Yeah, no that won’t affect the production at all. Grandmother and I have our doubts about that.

Meanwhile Jihae gleefully tosses aside any worries about starting a smoking sexual relationship with Colin because she’s managed to conduct two discreet past affairs and daddy never found out. Wait – I had the impression from the beginning of the book that she couldn’t sneeze in London without Chairman Park in Korea immediately knowing about it from both the people he has watching her as well as the media who follow her. I guess when it comes to sexual escapades, Jihae can hide what she’s doing.

Then Colin’s inept spying pays off and sets up the final conflict that is like a munitions dump exploding when Jihae realizes how Colin has lied to her. The sex (which she initiated – so yay for a confident woman in charge of her sexuality) was great but she won’t stand for being lied to (as her father has done) and manipulated (ditto). I didn’t like that it takes a deus ex machina acting character and some “expositional telling” to wind things up.

I did like that Colin pretty much (after some intial “she must be guilty just because of who she is” feelings) believes in Jihae’s innocence. Grandmother Song role in the story shows she’s learned a bit from book one and I find I like her more and more. The Song clan also rallies around Colin.

I felt for Jihae the most because her father is a shit and she’s been kept in the dark and ordered around her whole life. Her cheerful delight in letting go and enjoying simple things like going to famous LA eateries as well as her determination and hard work to prove herself in her business are wonderful. I appreciate how much time was spent showing the behind the scenes of producing a film stuff though I have no idea if any of it is correct.

Of course seeing more diversity as a matter of course in a story plus another damn fine cover are cherries on top but at its heart, this is a US set book about moguls and manipulation. There is a Korean flavor and much Korean influence to it all but the tropes are tried and true and I got tired being told the same backstory elements too many times. C+