REVIEW: Not the Marrying Man by Miranda Lee & REVIEW: The Highest Stakes of All by Sara Craven

I was intrigued by this book because seton mentioned how much she liked in over at the Amazon thread “How about HPs’ that you like“. Seton is correct that this is a bit fresher take on the mistress/bazillionaire trope. The one drawback is that I thought the writing was kind of rough in places and I’m not quite sure how to demonstrate that. 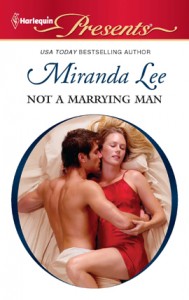 The story starts out with a young woman, Amber, writing in her diary about the imminent arrival of Warwick Kincaid, the new owner of the hotel where she works. Her first entry reflects exasperation with the furor the ownership change has created in the staff but subsequent entries show a changing mindset until Amber is swept away into Warwick’s life, as his mistress. Amber seemed much younger than 25 at times. She knows that being with Warwick is bad for her, that it offends everything that she thought she believed in, but she cannot bring herself to leave him.

Warwick treats Amber pretty poorly but you make us feel sorry for both of them by showing that Warwick’s actions make himself miserable. He’s just as much a victim to their lust/love/whatever as she is. Whether this bitter self hatred of his own actions is palatable will depend on the reader. Having read so many worse “heroes” in other books (see below), Warwick registered only as mildly assholic, particularly because after the first couple of scenes, we see that Amber has him wrapped around her finger (although she isn’t aware of it yet). Warwick tries to treat Amber poorly because he actually does love her. He wants her to break up with him and be happy to shake the dust of Warwick off her feet. But because he loves her and is weak, he also doesn’t want to leave her so he is constantly sending out mixed signals.

When Amber starts finding her nerve and bossing Warwick around, I started to really enjoy the story and certainly felt satisfied at the end. I still felt that the use of the diary and the way in which Amber talked and thought seemed too young for the story being told. C+

This book features one of the stupidest heroines of all of time. Joanna’s father has a gambling problem and so he gets his 19 year old daughter to dress like a slut to distract other card players. Joanna feels helpless but she does it because she loves her father. It’s not like she doesn’t have options though. Her uncle owns some kind of manufacturing firm but oh no, that might require her to take secretarial courses. She churns internally with shame over how her father uses her but he loves her and so she must save him. By acting like a slut. Okay. 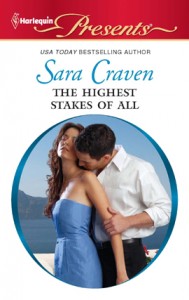 He displays this fatherly love by pretending she is his hot young piece on the side. All together, “ewwww”. One night in Australia, they fleece some young man and she plays a part by letting the young man feel her up in the gardens. Joanna feels awful about this but because she didn’t want the man to feel her up, she is innocent and should be absolved of wrongdoing. No matter what her father tells this young man. She extracts a promise from her father that he’ll never use her in such a way again, but alas, she is pressed to do her duty a year later when the young lamb’s protector comes after them.

Joanna’s affronted that Vassos Gordanis treats her like she is some tart at poker games who is someone’s fancy piece. Because I guess he should see inside her and recognize her shame. Thankfully she is a virgin so she can prove that she is no one’s fancy piece, just an idiot who allowed herself to be used over and over again. D