I read this book on recommendation from a friend of mine whose description of it brought me back to my early days of reading romances when Julie Garwood and Amanda Quick were my staples. I gulped the book down in one evening. It’s totally sudsy fun. These are not historically accurate masterpieces but they are romantic even while being transparently emotionally manipulative. The story works  well because the reader wants both characters to achieve their reward. 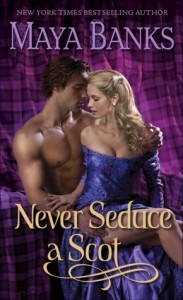 Graeme Montgomery and Tavis Armstrong are the chiefs of rival clans. They’ve been feuding for generations and the animosity is still thick with Tavis’ father having killed Graeme’s. The King of Scotland, however, desires for these two powerful clans to enter into a truce. He’s got worries enough from the border and the English and therefore decreed that Tavis’ daughter, Eveline, shall marry Graeme.

While they both protest this mandate, they agree to carry out the king’s dictates. Tavis and his family is distraught because they view Eveline as their heart and believe that she is likely to be mistreated by the Montgomery clan. Eveline hasn’t been able to hear for three years nor has she spoken leading her family to believe that she is daft.

Eveline was betrothed to Ian McHugh, the son of a clan chief with whom Tavis wanted an alliance. Ian would present a false face to the rest of the world, but to Eveline he promised cruelty and unspeakable degradation. Fearing this, Eveline ran away on her horse which threw her. She lay in a ravine for three days and when she was finally found, she was insensible. After a month or so of fever, Eveline recovered but she was too fearful to tell her family what happened and when Ian cried off, she thought remaining mute and not revealing her deafness would save her. It did but it also led her family and her clan to make up erroneous conclusions about her.

Graeme resigns himself to this marriage, knowing that his lineage will not be carried on. There was no way he would force himself on a woman without her full consent and he believes that Eveline, the daft, would not be able to consent. Plus, the idea of marrying a hated enemy is anathema to him and his family.

When Graeme arrives, his deep baritone is felt by Eveline. Low voices, rumbly voices, emit a vibration that Eveline can almost hear. She views her marriage to Graeme as a second chance.  It is her willingness to marry Graeme that begins the changes in him and in the blood feud.   Throughout the book, Eveline is treated terribly from nearly all but Graeme and Graeme’s sister. This provides the pathos and the conflict in the book which is good because Graeme is the sweetest guy ever and their romance has little conflict.  There is actually no sustained conflict as each barrier is easily overcome.

Eveline is put through the ringer. Not only was she potentially prey to a sadist but she was injured and became deaf.  She is afraid to talk because she can’t hear herself speak, can’t modulate the tone of her voice.  While she taught herself to lip read, that’s a boon and a curse.  She can read all the insults that are being said about her.  She’s willing to work hard to be the chief’s wife, but allows herself to be taken advantage of.  For me, each heaping spoonful of abuse was offset by Graeme’s sweetness.  (Graeme is such an honorable guy that he decides that he will likely be celibate during his marriage, not wanting to dishonor his wife by bedding other women in the clan).  It’s not a formula that will work for every one.

I thought the deafness was well done.  Because Eveline can’t hear, she isn’t aware of what goes on around her and she can’t give off the appropriate emotional cues.  This is, in large part, what leads people to think she is “defective.”  She can’t always read the lips of people and must be directly in front of them.  In one scene, she had a candle held up to the lips of the speaker because it was too dark to read the lips. When her sister in law declares she wants to read and write, Eveline realizes that learning this skill would open the world up for her in terms of communication. However, Eveline’s easy adoption of speech again was disappointing.

As I said in the opening, this book is sudsy fun but lack of historical accuracy, the over the top abuse suffered by Eveline, and the easy resolution of seemingly every conflict may be offputting for some readers. C+