I have a soft spot for witches. It stems from my traditional fantasy reader background. After all, a witch is often the urban fantasy equivalent of a mage. Though I’d heard lots of buzz about your debut, Witch Eyes, I haven’t had the chance to pick it up. When I heard the premise of your new book, I decided to give it a go. 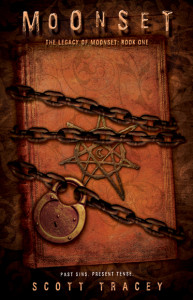 Moonset takes its name after an infamous coven of witches. In short, they were the magical world’s terrorists. They’ve been gone for years — having been executed for their crimes — but their legacy lives on. And by legacy, I mean children.

Justin, Moonset’s protagonist, and the other four children of Moonset’s members have lived under the strict supervision of the witch’s Congress. It’s for their protection, of course. Let’s just say some people affected by Moonset’s acts would be all too happy to take out their rage and grief on the next generation.

What no one says, but everyone knows, is that the Congress fears Justin and his “siblings” might follow in their parents’ footsteps. As a result, their training in witchcraft is carefully monitored and regulated. Because we all know that works out well: tell teens not to do something and of course they’ll be 100% obedient.

When the children are kicked out of their school, they’re relocated to a town that has ties to their parents’ pasts. Not that they know this. In fact, Justin and his siblings are kept in the dark. Not a good thing when supernatural monsters and renegade witches and warlocks are after you.

Then it soon becomes apparent that Justin and the other teens weren’t moved to their new home for their own safety. They’re bait. And if they happen to die in the process of catching the real target? Oh well.

I wanted to love this book. The premise is right up my alley. I adore thematic explorations of children making up for, and bearing the brunt of, their parents’ mistakes. I was also intrigued by the motivations behind Moonset. As the book unfolds, we learn there are inherent inequalities in the magical world (as is the case with everywhere else) and these imbalances are what drove Moonset to do what they did. But because Moonset lost and the witch’s Congress won, that part of history is ignored and glossed over. Unfortunately, a few factors detracted from these otherwise interesting things.

First of all, the characters were often stereotypes. The only person who was fleshed out was Justin, the protagonist, and sometimes that was even pushing it. I liked that he was the long-suffering “keep everyone together” brother figure but in some ways, he was too white bread. He sometimes lacked the quirks that bring a character to life. His siblings all had “roles” — Jenna was the alpha female, Mal was the jock who wants to be normal, Cole was the joker, and Bailey was the delicate soul — but never rose above them or felt fully dimensional.

Because of this, I couldn’t help but notice a recurring theme among the female characters. I literally could sort them into two major categories: Mean Girl and Damsel in Distress. The only one who didn’t fall into either category was Ash, Justin’s love interest, and she was such a Special Girl. I don’t mean that in a Special Chosen One sort of way. I mean that because she’s the love interest, she’s different from other girls. She stands up to Justin’s sister, Jenna – something that’s just not done. She banters with Justin’s brother, Mal, but is otherwise unimpressed by his charms. She marches to the beat of her own drum. And sure, I get that because the book is told from Justin’s POV, Ash’s portrayal will be colored by his attraction to her. But when every other girl in the book falls into easily identified categories, it’s rather noteworthy and obvious.

The plot had a lot of promise, but sometimes it struck me as being unfocused. The teens have moved from school to school, usually a result of Jenna’s acting out. Justin is tired of it but because his role is to keep everyone together and clean up after everyone’s messes, he bears with it. In many ways, Justin saw their new home as being their last chance. But then something — or someone — is hunting them. They have bodyguards but some are more effective than others. There’s some maneuvering and politicking within the witch’s Congress involving them. The relationship between the siblings is becoming increasingly strained. Justin finds something once belonging to his infamous father. It seemed like there were lots of elements that should have blended well together but didn’t.

Despite my misgivings about the novel, the ending leaves openings for future books (and I’m sure there are). The world you presented interested me enough to check out the next one. That said, I hope the characters rise above their superficial roles and more time is spent delving into the world of Moonset in all its ugly glory. C+