REVIEW: Mine Under the Mistletoe by Kat Latham 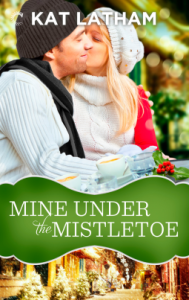 Thanks to a transatlantic house swap, California girl Ashley Turner is finally going to fulfill her lifelong dream of a proper English Christmas. Her holiday plans did not include a sexy stranger climbing into her borrowed bed in the middle of the night. But in the light of day, Ashley can’t help but wonder if Santa has delivered early…

Game designer Oliver Stansfeld can’t wait to leave dreary London—and all its difficult holiday memories—for sunny San Diego. But a freak ice storm and a grounded plane have forced him back to his already-occupied flat. To make up for the mix-up, the least he can do is show his pretty houseguest where to get the perfect Christmas tree before he leaves.

The more time they spend together, the more their attraction grows, and soon Ashley is tempting Oliver to give in to the spirit of the season and snuggle up for the rest of the winter. As the ice melts and flights start taking off again, he must choose between giving in to the past or risking his heart on a chance at love.

While drumming my fingers as I (impatiently) wait for the follow-up to “Knowing the Score” (hint, hint), I decided to see if you had any other offerings at Carina. Yay, you did and I caught it just in time to add to our holiday novella reviews. Christmas in London – what could be better? Well, as it turns out, falling in love during Christmas in London.

The opening set up is reminiscent of the film “The Holiday” wherein international house swapping goes awry. Oh, if only a super gorgeous, single, nice English guy ended up naked in bed with all visiting super cute, single American women – I think the British Tourism agencies need to look into this pronto. It’s not exactly a meet cute since there is a bollocks kicking as Ashley isn’t a helpless female and poor Ollie was so knackered from a fruitless wait on the tarmac at Heathrow before they called it a day that he didn’t realize there was a Goldilocks in his bed. Things just had to improve from there.

Ashley’s efforts to achieve a picture perfect Dicken’s Christmas seemed a tad schmaltzy at first, though hints are provided for the reason, until the grand reveal at the end but Ollie goes along with it and decides to help show around the pretty American whose knickers he’d like to get into. His reasons for trying to avoid the holiday cheer also make sense and they’re are a bit more fleshed out earlier in the story. I liked that the fact that both characters actually open themselves up and tell these dark, past issues to each other is used as a step forward in the relationship.

What seemed trotted out from angst plotting central is Ollie’s almost split second relationship panic leading to his decision to bolt just when the plot required it as was his change of heart and reversal a short time later. If Ashley and Ollie had more time together before this happened, I wouldn’t be quite so nitpicky but it felt more rote than real.

I did enjoy the virtual experience of Christmas in London which managed to avoid all the tacky tourist traps. The flower market would be wonderful to wander through as would the stalls of arty knickknacks. And Panto – well, who knew? Are there any youtube entries of this because it sounds like something I just have to see. Also thank you for letting Ollie be a commoner. Sometimes I get the impression that every other Brit is a Sir or Lord Something.

The wait for the next entry of your rugby series might seem endless but this helped it go by a little faster. The trip to London and English holiday traditions was fun even if the romance didn’t quite hit the spot. C+