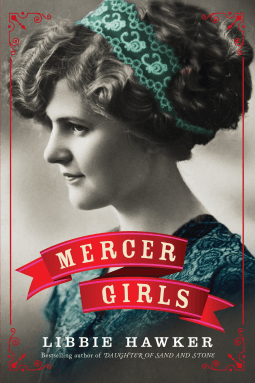 It’s 1864 in downtrodden Lowell, Massachusetts. The Civil War has taken its toll on the town—leaving the economy in ruin and its women in dire straits. That is, until Asa Mercer arrives on a peculiar, but providential, errand: he seeks high-minded women who can exert an elevating influence in Seattle, where there are ten men for every woman. Mail-order brides, yes, but of a certain caliber.

Schoolmarmish Josephine, tough-as-nails Dovey, and pious perfectionist Sophronia see their chance to exchange their bleak prospects for new lives. But the very troubles that sent them running from Lowell follow them to the muddy streets of Seattle, and the friendships forged on the cross-country trek are tested at every turn.

Just when the journey seems to lead only to ruin, an encounter with a famous suffragist could be their salvation. But to survive both an untamed new landscape and their pasts, they’ll need all their strength—and one another.

The 1960s US TV show “Here Come the Brides” was a little before my time but I do know the general gist. It’s the mid 19th century and a family of three (handsome) logging brothers are involved with bringing in women as brides for the desperate men of the area to marry. What I didn’t know is its basis in historical fact – that being the two expeditions by Asa S Mercer to bring back Eastern women to not only marry the vast hoards of men of the city (10:1 ratio) but to also bring culture, gentility, morality and education as well.

The blurb hints that this will be more historical fiction and women’s fiction than romance which indeed is the case. Starting in the mill town of Lowell, Massachusetts – industrially devastated at this point by the lack of cotton due to the Civil War – the story follows three women. Josephine, Dovey and Sophronia all have their reasons for needing or wanting to leave Lowell. Jo is dodging something from her past which is only hinted at for a long time. Dovey’s mill owning father has lost everything and seeks to marry her off for advantageous business and financial gain. Sophronia is the daughter of a famous minister and is steeped in the Gospel to the point where no man could possibly live up to her expectations and all have stopped trying.

They don’t know exactly what awaits them on the other side of the country but they first have to get there. The sea voyages might make her nauseous but the vibrant beauty of Panama seduces Dovey towards her future goals. The reality they find in Seattle – streets calf deep in thick, black mud, eager men besieging them and the high society women of the town despising them – might be a set back for weak women but not for the Mercer Girls. They’re made of far stronger stuff.

But for women who were brought there to marry, Jo, Dovey and Sophronia initially prove a disappointment to the hopeful men. Jo has her reasons for not marrying despite quickly finding a man she loves who adores and loves her back. Dovey shocks the town by finding one of the few jobs that doesn’t involve her lying on her back. Meanwhile Sophronia finally finds a man of God whom she can respect and comes to care for only to discover she can’t forgive his feet of clay.

At first the suffragette subplot seems incongruous but each woman, despite any personal disagreements they have, discovers a reason to support women gaining say over their own lives and being able to not only influence a man’s vote but be able to cast one for herself. However, this section of the story drags a little.

There are also things about each women that bothered me. Sophronia is the type to give Christians a bad name. She’s so uptight even her hair must be rigid in disapproval. Dovey’s initial fascination with Panamanian prostitutes and propensity to wander alone through rough areas of several cities can be chalked up to a 16 year olds enthusiasm and lack of fear of any consequences. However she never seems to see or acknowledge the ghastly side of the “night flower’s” profession – the violence, the diseases, the unwanted pregnancies which occur in spite of any precautions. And of course poor Jo has a black cloud hanging over her head for years which magically disappears just as the book is about to wind up.

Since a real story is the basis for the book, I can see not turning it into a standard romance. The glimpse of who the real Mercer Girls were – in the fictionalized characters here – and what they accomplished is fascinating. Their descendants have just cause to be proud of them. These women though, I had some issues with. C+