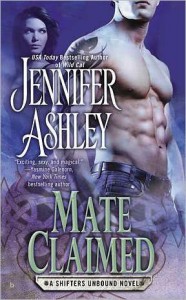 This shifter series has a unique world setting. It’s almost punk in some sense because the world of the shifters is anti establishment in every way. The humans are afraid of shifters and despite shifters greater strength, humans have superior power and were able to corral shifters onto reservations of sorts and collar them. The collars emit electrical shocks of varying degrees if the shifters exhibit aggression.

Despite their oppression, the shifters have created a strong community. This entry into the series centers around Iona, a half Feline shifter , and Eric Warden, the alpha Feline who is the head of the local Shiftertown. Iona has been kept a secret by her family for 32 years which mean she has no Collar. Further, should she be found out, her family would suffer serious repercussions.

Iona’s beast is straining, however, and her pheremones were flashing her availability to unmated shifters for miles. Her seclusion from the other shifters has prevented her from learning how to control both her beast and the mating instinct. If she doesn’t learn control she’ll become feral and hurt those around her. And she’ll no longer be able to hide.

Eric wants to mate Iona but his position is being challenged by the influx of a shifters from a northern Nevada shiftertown that was closed down.  The northern shiftertown is led by a Lupine shifter named Graham.  Graham has plans to take over the leadership of both blended shiftertowns from Eric.  Graham does this not because he dislikes Eric but because in Graham’s mind, there can be only one Alpha leader and that’s him.

The conflict between Eric and Graham was the most interesting part of the story, unfortunately for a romance. In some ways these seemed more a story about Graham and Iona rather than Eric and Iona.  Graham’s point of view is shown at several times and I think the focus away from Eric made Eric seem less interesting.  Graham and Iona undergo the most change in the story as Graham learns about how Eric has created a safe environment for his people and how subversively, they are challenging the hold humans have on shifters.  Iona has to come to accept the bonds of shifters and the mate bond itself.

The romance between Eric and Iona is fairly standard. Iona’s construction company wins the contract to build the new homes for the incoming shifters.  Eric must convince Iona that the collar and the mate bond won’t ruin her life and take away her freedom.  Eric is a very good leader; has good instincts and a lot of patience.  I liked him. I liked Iona.  It’s just that their romance seemed a bit dull but that Eric, for all his

I should not that there isn’t a love triangle in any way but Graham does make a play for Iona as part of his bid to challenge Eric’s leadership.  Graham and Iona provide the filter through which we learn about Shiftertown.

This series features strong female figures throughout from matriarchs in the family to Iona’s family construction firm run by her mother and the daughters.  I really enjoy seeing the way females are portrayed throughout the story.  While I’ve enjoyed every entry in the Shiftertown series and the world that is created is interesting, I don’t anxiously await these stories and they don’t stick with me.   C+