I decided to read “Making Him Sweat” because I like to try new-to-me authors at Harlequin, I hadn’t read a Blaze book for a while, and I wanted to see if a book about boxers could hold my attention. I mean no insult to boxing but it’s not a sport I follow and my feelings about it mimic those of the heroine – I tend to watch it from behind my hand and through my fingers and I’d rather not think about the impact of the punches too much. I’m happy to say that I’d try another boxing book and given the popularity of MMA, I will probably have the chance.

The conflict between Jenna and Mercer is laid out from the beginning. She’s inherited the building that houses her deceased father’s Fight Academy – a man she never really knew since he didn’t bother to stay in touch with her after her mother bailed on the marriage and left with Jenna in tow – and her plans don’t include keeping it open past the specified time mentioned in the will. Instead she wants to make it the location of Spark: Boston – the newest old fashioned matchmaking business but in a franchised format. She’s smart enough not to get huffy or rude with Mercer – a man whom her father mentored and asked to manage the club after his death – though she’s a little hurt that her father seemed to be closer to this boxer and the other fighters there than he ever tried to be with her. 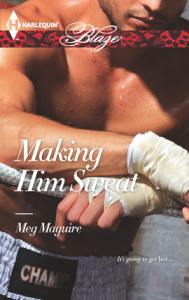 At this point I was expecting the usual clashes and sparks and snits that often initially accompany the beginning of a relationship between a hero and heroine with clear cut issues from the start. But lo and behold – Mercer is polite and Jenna returns the favor. She’s also willing to listen to his plans to try and financially turn the Academy around and finds herself touched, though still a bit resentful, when the fighters with whom her father spent so much time come to the Academy and stop by to offer their condolences to her. This is also when she begins to discover just how much her father loved her as the men tell her how proud he was of her and how often he mentioned her accomplishments. Jenna also doesn’t pratfall while around the boxing rings and equipment – something that happens so much in romance novels to build tension, sexual and otherwise, between hero and heroine.

Meanwhile, Mercer is astonished to learn how badly Jenna thinks of her dad. He’s only known the man who adored his daughter though Mercer wisely doesn’t force the issue. He also takes the limited time he thinks he has left at the Academy as a challenge to turn it around rather than an opportunity to make Jenna’s life miserable. Then given the fact that he’s been staying in the apartment above the facilities and Jenna decides to move into the second bedroom to save more money for her new business, they start to know each other a lot better. I expected a quicker move to sexual intimacy since this is a Blaze book and I wasn’t mistaken but it didn’t feel too rushed since both go into it with eyes open and not expecting anything long term. They are two adults, interested in each other who decide to go for it given the sexual heat between them and sell-by date they see on the relationship.

Well the sex is smoking and pretty soon its obvious that there’s more than mere chemistry going on between them. What is going to fill out the second half of the book?, I wondered. This is where it falters a bit for me. Jenna finally discovers the truth about how her father tried to maintain their relationship which leads to a crying jag which offers Mercer the chance to show just how much he feels for her – aside from him wanting to beat up any man in the future who ever makes her upset. But then this issue is (almost too quickly) laid to rest.

The remainder of the book ambles along as we watch Jenna and her new assistant work to set up Jenna’s business and plan the opening event, Jenna bite her lip with concern when it looks like the Academy will have to be closed regardless of anything Mercer attempts, and both of them reluctantly coming to accept the end of their time together. It’s not exactly riveting and certainly not as entertaining as it was watching Mercer and Jenna get some hot sex on. A last minute event saves the day but it’s more a quiet save than a dramatic one. Though Mercer does a spiffy job of telling Jenna that he’s going to propose to her and keep on doing that until he convinces her to say yes. I just wish the entire book worked as well for me as the first half did. C+