REVIEW: Mad About the Earl by Christina Brooke 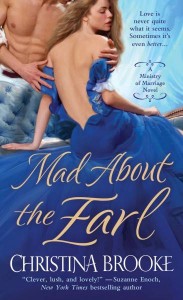 The Duke of Montford has a collection of five wards.  This was the confusing part of the story to me.  In the first two chapters there are a slew of new characters and many of them were related and had similar titles.  Lord deVere is a Baron and the hero is from the deVere family and he is the Earl of Tregarth.  The heroine’s cousin is the Marquess of Steyne who is also referred to by the name Westruther and then there was his cousin the Viscount of Westruther. And so on and so forth. I eventually went to your website and gleaned some understanding from the minimal family tree information that was provided but I was irritated that it wasn’t better explained in the book itself.  Maybe a family tree would have been helpful or a cast list?

Rosamund Westruther had been betrothed to Griffin deVere in the summer of 1812.  She was thrilled. She gazed at his tiny portrait, an odd and not very attractive compilation of features, often imagining his lovely proposal and his sweet, soft betrothal kiss.  What she hadn’t bargained for was the beast of a man to not want to marry her.  When she overhears deVere’s grandfather speaking with Montford about deVere’s reluctance, she has the choice to flee in tears or fight.  She chooses to fight which completely baffles Griffin.  He cannot believe that Rosamund, a woman so beautiful that men stop in their tracks just to gape at her, would be interested in him.

“Fury burned through him, the same kind of frustrated anger that ultimately crashed in after an encounter with a willing bit of muslin.  Those women never cared what he looked like as long as he paid handsomely for their favors.”

Yes, he wanted her so much, he was near crazed with it.  But he hated the feeling. The hurt and resentment of it tangled inside him until he couldn’t see straight.  And that same impulse that made schoolboys pull pretty girls’ hair made him step toward her, boxing her in between his body and the stone wall behind her.

She didn’t shrink back or cry out or weep.  She simply looked up into his face.

While I enjoyed the sentiment his “want her so much, he was near crazed with it” occurred on page 18 of the book and merely minutes after their first encounter.  This represents the problems I had with much of the book.  Every emotion was troweled on but dealt with superficially.

Griffin thinks of himself as a lout, a brute and that no woman could ever find him desirable.  We never see any one snubbing Griffin nor are we shown why he believes that women would hold him in disgust.  When he bursts onto the London scene every one of Rosamund’s family views him as the stablehand but he’s not dressed appropriately and he had just come from the stable.  Unfortunately for Griffin, he needs something from Rosamund.  In exchange, she wrings an agreement from him to court her.

My main complaint (other than the hook) was that I didn’t feel that the story went deep enough into the emotional conflict.  The resolution was too easy.  Griffin’s big character change was believing that Rosamund loved him but I didn’t feel like Griffin’s insecurity manifested itself in other ways.  Rosamund read as a more static character for me.  While the interactions were lovely between the two, the plot moves along more by external threats to their relationship rather than internal angst.  It’s a sweet and sexy romance but it doesn’t have a stickiness of other stories.  Still, I am a sucker for a beauty and the beast story.  C+

→ Jane
Previous article: REVIEW: From This Moment On by Bella Andre
Next Post: Wednesday Links and Deals: Amazon creates a special site for iPads; AAR Is Providing Guidance to Publishing Agents