REVIEW: Lust Ever After by Rose de Fer

London, 1881. The brilliant Dr Frankenstein has a thriving practice in the city, treating ladies for ‘hysteria’ and seducing them along the way. Through his pretty chambermaid, Justine, he spies the perfect opportunity to create what he has always dreamt of – a truly liberated woman. When Justine wakes in the laboratory she has no memory of her former life. All she knows is that she has a ravenous sensual appetite and she will let nothing stand in the way of her desires, least of all Frankenstein. Soon Justine finds herself drawn into a world of forbidden delights, first with her female friends, and then with a mysterious young man named William, with whom she feels a strange and unearthly bond. An unbreakable connection that her creator will do anything to destroy. 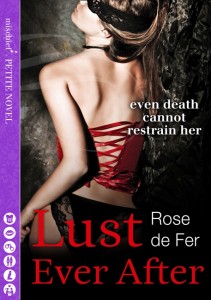 Now, I’m a big fan of Mary Shelley’s Frankenstein. One of the things that drew me to the blurb was the mention of Justine, who in the original book is a hapless maid executed for the murder of Dr. Frankenstein’s brother, William, a murder Dr. Frankenstein knows his creation committed. Though she’s a very small part of the original book, I always thought her a particular poignant character, one of many people who are the collateral damage of Frankenstein’s experiments (and even moreso, his later refusal to take responsibility for his actions).

So, while a part of me was going, “Erotica based on Frankenstein? How about no?”, another part was curious about how Justine (and less so William) would be integrated into this story.

As it turned out, they weren’t – the names are used, and the Justine of both stories is a maid, but that’s about it. What Lust Ever After ends up being is pretty straightforward historical erotica with some intriguing elements that aren’t ever fleshed out (no pun intended).

I’m not sure how much of the plot to recap (I don’t generally review novellas) so I think I’ll err on the side of caution and just reiterate what the blurb says, more or less: Dr. Frankenstein is based in London; he’s built a big machine called the “Alleviator” used to treat women who come to him with complaints of hysteria. The book opens with a salacious demonstration in front of a group of (male, natch) medical students, using a young bookseller’s daughter, Daisy, as the subject. Frankenstein, who’s a horny arrogant prick (unlike the whiny arrogant prick of the Shelley book) plans to seduce both Daisy and Justine, who works as his maid, in good time. It turns out that Daisy doesn’t swing that way, and more’s the pity, Justine drowns herself in a river (in despair over being thrown over by her beau) before Frankenstein can get his hands on her. But it occurs to him that this is the perfect opportunity – a stormy, lightning-filled night – to try again to create “life”, an experiment that he’d tried once before but which met with unspecified failure. So Justine is not a homunculus of the old-school variety, cobbled together from bits and pieces of corpses (which presumably wouldn’t be very sexy, though I wouldn’t put it past some author, in a rule-34-of-the-internet kind of way); rather, she’s just your garden-variety dead-girl-brought-back-to-life. Except for a few minor details: she’s lost her memory, she’s fairly impervious to cold and pain, and she’s super-horny all of the time. Hmm, I don’t remember that in the original book. Anyway, Frankenstein soon discovers that he can’t control his “creation” quite the way he’d hoped to, and meanwhile Justine is off, um, alleviating herself with Daisy, Dr. Frankenstein’s clients (which lessens their need for his services), and eventually the not-very-mysterious-William.

There are hints of a more complex story here, touching (very lightly) on the themes of the original Frankenstein, the always-intriguing birth of the vibrator industry, and Dr. Frankenstein’s not-entirely-sincere desire for a “liberated” woman. But at 116 pages, there just isn’t enough room to really delve too deeply into that, especially when you consider that this is erotica after all, and a fair amount of the scenes involve people getting it on. (Not to say that sex scenes can’t help develop the themes of a plot or move a story forward, but I think it’s harder to do and I don’t think this book does it.) The sex is fairly hot, though….I guess kind of vanilla? I don’t know; I think what’s considered “vanilla” has evolved somewhat. Or maybe I just don’t read enough erotica to really judge where this falls on the spectrum. But I did think the sex was well-done.

My grade for Lust Ever After is a C+, which translated to a sort of qualified “meh.” It’s not a bad way to spend an hour, but I wouldn’t go out of my way to read it, either.