What caught my attention about this book is that you, and English author, are writing an American heroine. I’m so used to the reverse – especially historicals – that I wanted to see how well you’d pull it off. Um, still a few issues and / or word choices here or there to give the game away but those didn’t end up being the main issues I had with the story. Let me get to that in a minute. 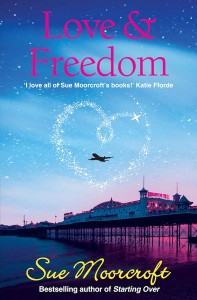 Honor’s stated intention for coming is to find out information about her English mother who abandoned her as an infant. Who is the woman, where is she and why did she up and leave with no further contact for all these years? While searching for those answers, Honor takes menial jobs to pay the rent and begins to fall for Martyn who returns the interest until he discovers something that initially puts him off a romance with Honor.

As Honor begins to fit into everyday life in the small English town, she and Martyn finally give into their feelings. But when old secrets and past relationships come home to roost, will they even want to work out a future?

Honor does come across as more American than English yet because she’s half English and – here’s the important part – has apparently spent lots of time in England – I would expect, and did find, more Englishness to her than I would expect from someone who had no ties to the country and who hadn’t been there. Yet, there are UK English phrases in her speech that threw me as well as UK spellings I found jarring such as in an email from her US father. Cases for suitcases, “down tools” for stopping work, prawns for shrimp – all these struck me as things the average American wouldn’t say.

One thing, as an American, that I wondered about was the ending of the small town names in the area – Rottingdean, Eastingdean, Saltdean. I would have been curious about that and inquired into it. I had to laugh at how the locals were ready to rip off American tourists.

Honor seems to drift. She drifts into a relationship with her husband Stef because of their childhood past and how he protected her from bullies. But I don’t recall her ever saying she was madly in love with Stef. She puts off contacting her family and ending the relationship with Stef until events force her to do that. Even after Stef shows up in the story, she still sort of drifts around dealing with him being there and creating havoc. Honestly, this annoys me about her and seems to be something that is habitual for her. When she seemed almost ready to let Stef blackmail her into another go at their marriage, I wanted to smack her.

I do like how Honor doesn’t back down in certain situations like when attacking the bullies with fish and chips and then telling Martyn’s friend off when he lewdly inquires about her sexual fantasies. This part jibs with her statement that she has anger management issues while her drifting around relationship with Stef doesn’t. But she does finally deal with Stef once and for all before starting over with Martyn so I guess she learns something over the course of the book and puts it into practice.

Then there’s the whole thing Big Secret. There are scads of clues there but, wow, how can Honor manage for that long and not give any clue about it to anyone, even in her private thoughts? And when Martyn, bless his heart, finds out I can understand his anger. Honor’s reasons for keeping her secret just don’t match with the sheer “ick” factor floating around from all this.

Martyn’s family background is Catherine Cookson – and weird. It took me aback for a while after the technicals about it got explained. Both of them had bizarre family backgrounds but still had loving family members just the same. Though I honestly doubt the FBI would have gone after Honor’s mother had she taken Honor with her. Good for Martyn that he doesn’t want to get involved with a married woman on principle. Just because he’s gorgeous, doesn’t mean he’s a dog. Thank God Martyn tells Honor to sort her relationship with Stef out before they get involved. Martyn is initially attracted to Honor because she’s hot though he skitters away when he learns she’s married and doesn’t resume anything physical until she tells him her marriage is off. They feel a physical connection – that part is obvious but when does it slip into something deeper? I’m not sure I felt this bit.

As an exercise in how well you can write an American heroine, I think you did okay but with room for improvement. It certainly is an eye opening reverse example of what UK readers have complained about from portrayals of their own by American authors. However, the Major Reveal and the flow towards the HEA in the romantic relationship though are what ultimately didn’t work well for me. C+