I haven’t read such an adorable hero in a long time. I was just sad he was matched up with Evie.

There was an inequality to the characters that set me on edge and I never quite felt balanced in the end. Evie Ramsay took over a printer’s shop that her father won gambling. She created a scandal sheet called The London List. Her favorite target was Benton Gray. She reported his every exploit until he became, as his mother put it, a “byword of loose morals and louche behavior.” After Ben buys the printing shop from her addled father, paying handsomely for it so that Evie would want for nothing, she prints a goodbye edition accusing him of engaging in lying and robbery to obtain the paper. Residents of London who love The List rise up against him. 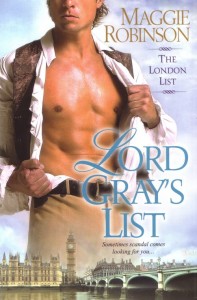 In amongst this, Evie and Ben are carrying on a hate/hate lust relationship where Evie proclaims to hate Ben, insults him at every turn, and then proceeds to have sex with him. I can’t say that I like this when the roles are reversed and it isn’t made more palatable because Evie is the one ripping into Ben.

Did he deserve it? Not that I saw. As he said to her “What have I ever done to make you hold me in such contempt. I admit I didn’t know what I was doing with you when I was twenty, but surely you cannot hold me responsible for failing to satisfy you all those years ago.” What Ben doesn’t quite grasp is that Evie loved him and his propensity for gambling curdled that love into disdain due to her own experiences with her father, a feckless gambler who drug her all over the countryside. Ben actually thinks this may be part of the problem but feels that no one could base a lifetime of hatred on it.

Evie’s excuse is that “every time she had written about Ben or some other rakehell, she had hoped to shame them into reform and responsibility.” Evie imputes her father’s sins on Ben and turns her paper into somewhat of a crusade. She believes that she is performing a vital service in this shaming along with the advertisements she runs that brings people together or helps individuals find jobs.  Evie’s character needs some redemption but there is no moment of realization that what she had done is possibly destructive to individuals.  She’s the paparazzi of the Regency, spying in windows and publicizing individuals’ foibles.

What saves this book and Evie is Ben. We never see his licentious behavior unless tupping his love in his library with her full agreement is licentious. But we are privy to his good nature, his ability to take a punch on the chin and keep going, his ineffable spirit. He is just so good natured and so in love with Evie, that, well, despite Evie’s poor behavior you want Ben to win her. Because that will make him happy.

The ending contained two instances which, while I understood their necessity, lacked believability. I wished that they had been better integrated into the overall storyline because as it was, the authorial manipulation was so obvious that it jarred me out of the book.

Ben  grows in the story realizing that there are a horde of people that could use his help and that his past life was a bit wasteful.  Evie is a hard worker and she does feel for those who are need of her assistance.  My animosity toward her faded over the course of the book, but had Ben not been such a decent character and had his desire for Evie not been as strong, I don’t know that I would have been won over in the end.  C+