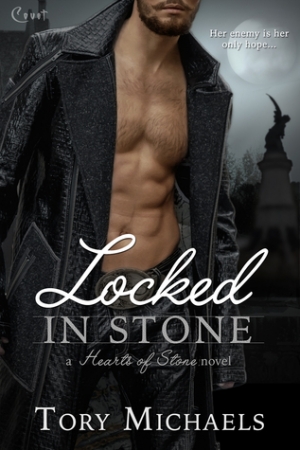 When I saw that your latest book was about gargoyles, I was intrigued. That sub-genre of paranormal romance normally doesn’t see a whole lot of love – no pun intended. And I certainly can’t recall very many where the female is the gargoyle in question. I must say, however, I was quite pleasantly surprised by this, the inaugural book in your new Hearts of Stone series.

Gargoyle and Sacred Mother, Rose Johnson, is a young woman of limited means who has spent her entire life looking over her shoulder. Recently, she found her guardian decapitated – moments before a death spell obliterated said guardian’s home. Compounding the horror is her guardian’s last words – sending Rose to the very group, the very beings, they’d been running from since Rose was just four years old. She knows little-to-nothing about her heritage – just that she IS, not how to access any of that internal power. And now she’s on the doorstep of the Sentinels, half-angels who failed her family over twenty years ago and whose failure sent her into hiding. Given the way her luck is going, wouldn’t it happen that the first Sentinel she meets is the very one who had sworn, and failed, to protect Rose’s mother? The two must put their differences aside, however, in order to work toward keeping demons and other things what go bump in the night on the proper side of the universe, away from the Earth they want to make their unholy playground.

Overall, I liked the book. I enjoyed the mythology and world building that’s taking place – I just wish there was a little bit more of it. Most of the story seemed to focus on the present, which is all well and good, but it left me wanting to know more about Rose’s past. What was she like as a teenage gargoyle? Did she have friends? How did that affect her? I wanted to know more about her job and not just the little hints that were dropped here and there. It’s like you dropped in a juicy morsel about a hog that was hauled across South Africa and then left the readers hanging! I get that it was a plot device, but it seemed like one of those perfect places to delve into a bit more character development and, likely, to create a touchstone moment for readers to bond over.

One other quibble I had was the “too many names” issue. It seemed like every person had at least two names, and those names were used a little inconsistently. I kept having to flip back and forth to find out who Brier was (Rose), or Robin (Cal), or several others. It’s a minor thing, but it kept pulling me out of the story whenever I was just getting settled in to a good part. Now, this is likely just a peeve of mine – many other people’s mileage may vary.

The concept was absolutely delicious. I loved the idea of a female gargoyle who was bigger and stronger than her Sentinel or human male companions. You struck the perfect chord between her strength and the vulnerability of a woman who’s been told all of her life that she’s the last of her kind. I loved how you captured Rose’s loneliness in the knowledge that she’s the only one left. It was hauntingly beautiful. That was beautifully juxtaposed with her humor and determination to do whatever needed to be done, whenever it needed to be done, very few questions asked. It wasn’t so much that she brought up points with the idea of shirking her duty – it was more that she needed clarification, and by gods, she was going to get it.

And that beautiful characterization of Rose set the standard pretty high for the other characters – and this is where you were a little inconsistent. Lucas, Dennis, Vil, Ang and the others seemed like they were just props for Cal and Rose’s love story (which felt like an afterthought in and of itself), rather than fully developed characters in their own right. You gave me glimmers of some really cool things with them, but then let those glimmers die out. I was a little disappointed, I think, in what amounted to unrealized potential.

However, that being said, I have every intention of picking up the next book in the series whenever it becomes available. I love where you seem to be going and think that this book maybe just suffered from Series First Syndrome, wherein the author is just getting to know the universe and characters and hasn’t quite hit that comfort point yet. You’ve introduced me to people I want to know more about, and I can’t wait to see where you take us next. C+

Missing the Gargoyles cartoon as much as you do,