When Shiver came out last year, it was touted as Blood and Chocolate meets The Time Traveler’s Wife. Since Blood and Chocolate is one of my favorite books, I eagerly picked your first foray into the werewolf YA arena. In the end, I decided it was more accurate to describe Shiver as Twilight for the werewolf crowd. Despite my issues with the book, however, I liked the prose and was curious to see how you intended to continue the love story of Grace and Sam in Linger since I could easily see Shiver as a standalone novel. 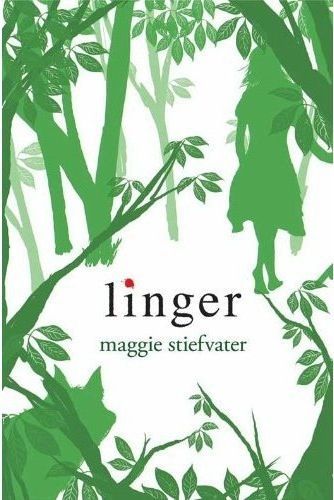 In the world depicted by Shiver and Linger, werewolves are the result of a virus. The shift between human to animal and vice versa is triggered by temperature changes. In the warmer seasons like summer, they take human form. In the colder seasons like winter, they become wolves. It brings a whole new meaning to developing a heavy coat of fur to guard against the cold.

Unfortunately, the older a werewolf gets, the more extreme a temperature change is needed to trigger the shift and the longer they spend in their wolf form. So instead of taking the warm temperatures of spring thaw to trigger the change to human form, they eventually need the scorching heat of summer. Eventually, they become unable to change back to their human shape and in fact, if they spend over a decade in their wolf shape without changing back, they die.

In Shiver, we learned that Grace was attacked by a pack of werewolves as a child but never became one herself. Ironically, instead of the lasting trauma you’d expect from such a violent, childhood attack, she developed a lifelong fascination with wolves.

Linger starts after the events of Shiver, which ended with Sam being cured of his lycanthropy through unlikely means. Grace and Sam now enjoy an idyllic love, teetering on the border of adulthood and with it, the impending question of their future plans after Grace graduates from high school. In addition, Grace has developed an unlikely friendship, if you can call it that, with Isabel, the sister of a boy who became a werewolf in Shiver but died of the same cure that saved Sam’s life.

But it isn’t meant to last, and complications arise. After having spent the majority of Grace’s life absent and uninvolved, Grace’s parents show concern over her deepening relationship with Sam. Now that she is on the verge of turning eighteen, they make every effort to show their disapproval and keep them apart. Grace and Isabel also discover a dead wolf in the forest and determine its cause of death was the fact it had remained in wolf form for too long.

Sam has issues of his own. Despite being glad that nothing no longer separates him from Grace, he misses being a werewolf. He has no choice but to face this regret every day. Because the pack leader was lost to his wolf form permanently last year, it’s now Sam’s responsibility to take care of the other wolves. This includes three new werewolves the former leader made last year, one of which is Cole, a former rock star gone missing who simply wants to disappear but soon learns it’s not that easy.

I still enjoy the prose of this series. It’s dreamlike and sweet, heavy with angst and foreboding. If you’re in the mood for that sort of thing, this is a perfect book.

The wolves in the woods are strangers now that I know the secret of the pack. Beautiful, alluring — but strangers nonetheless. An unknown human past hides behind each pair of eyes; Sam is the only one I ever truly knew, and I have him beside me now. I want this, my hand in Sam’s hand and his cheek resting against my neck.

But my body betrays me. Now I am the unknown, the unknowable.

This is a love story. I never knew there were so many kinds of love or that love could make people do so many different things.

I never knew there were so many different ways to say good-bye.

Because of that prologue, I as a reader spent the entire book waiting for the inevitable to happen. The book does deliver on the promise made in the prologue, so readers not in the mood for a bittersweet ending might do best to skip this book. That said, I thought the similarities to Twilight were even more pronounced in this book, so fans of that series might find this one worth checking out if they haven’t already.

After my complaints last year about Grace’s oblivious parents and how I’m weary of the trope of absentee parents (whether by death, lack of caring, or otherwise), I was glad to see their increased involvement in their daughter’s life. It wasn’t for the most positive of reasons, true enough, but I found it to be a very realistic portrayal. Her parents were never really involved with her life, always being wrapped up in their own, and until Sam came along, Grace never had a reason to rebel or cause trouble and was in all ways the perfect daughter for them. I can definitely see the conflict that would arise when Grace starts making decisions of her own, that run counter to their own preferences, and they realize that they have no true control over their daughter because they never formed a close relationship with her. Cole said it best when he said the parent-child relationship between Grace and her parents is most accurately illustrated by the fact that they locked her in a car at the height of summer and she was almost boiled alive.

On the other hand, I found the relationship between Sam and Grace saccharine and almost unbearably perfect. Even with the inevitable tragedy hanging over their heads, the perfection of their relationship grated on my nerves. There’s conflict surrounding them, but there’s no conflict between them even when the external conflicts affecting them separately should affect them interpersonally. Instead, the text continually reinforces the idea that Grace is perfect for Sam. Grace and Sam are perfect together. Even Isabel and Cole make these observations and in many ways, that kind of opinion espoused by those two is nearly unbelievable. It was a bit much.

Speaking of Isabel and Cole, I found their characters far more interesting, separately and together. Both are broken in their own ways, and both are trying to run away from their pasts. It’s true these kinds of characters would appeal to me more than Sam and Grace regardless of the depicted perfection of the latter pair, but I found their perspectives a breath of fresh air over the course of the novel.

For the most part, the novel does maintain a dreamlike pace, swinging back and forth between Grace and Sam trying to stay together despite her parents’ efforts, the foreshadowing of the dead wolf found in the forest and how it ties into Grace’s deteriorating health, and Sam’s attempts to initiate Cole into pack life. But much like its predecessor, everything comes to a head in the final pages of the novel. This can be jarring, and I’m starting to dislike the narrative trend of having all the action take place within the last 30 pages of the novel.

I do intend to read the next book whenever it comes out, and I assume there will be one considering the way this one ended, but I doubt I’ll be running out to get it. Linger isn’t a bad book, but the book-to-reader mismatch was very apparent since I found Sam and Grace more interesting apart than together. In fact, the more memorable things for me have nothing to do with their relationship with one another and have everything to do with things that impact them as individuals. I think I’m simply growing to dislike the idea of presenting romantic relationships in YA as all this all-consuming thing that shuts out friends and family, and I know I have Twilight to blame for that distaste. But for that reason, I still think it’s worth checking out if you’re a fan of Twilight and werewolves. C+