REVIEW: Line and Orbit by Sunny Moraine and Lisa Soem

I’ve been taking part in SuperWendy’s TBR Challenge and this month’s prompt was to read a new-to-you author. I’ve had Line and Orbit in my TBR since it came out last year, it was recommended by a trusted source, and it has received lots of very positive reviews. I was in the mood for an SF-romantic story, so I pulled it out and started reading. Overall, it was an enjoyable read, and I can see why so many people have raved about it, but it didn’t entirely work for me for a number of reasons. 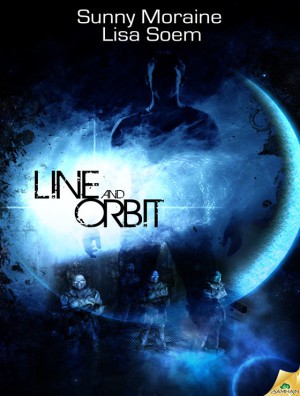 The story is a relatively straightforward one. Adam Yuga is an executive in the Protectorate, a society in which genetic manipulation has resulted in attractive, healthy, brilliant, and practically-perfect humans. Adam earns a huge promotion to near the top of the Protectorate hierarchy, but his required medical evaluation turns up an abnormality that not only disqualifies him from the position but casts him out as an exile. Sick, broke, and desperate, he steals credits by hacking into the Protectorate servers and is saved at the last minute by Lochlan, a Bideshi stranger who takes Adam back to his own society, an exiled nomadic group which travels via huge spaceships. Bideshi healers are able to reverse Adam’s condition, but only temporarily, and meanwhile Melissa Cosaire, who is more or less the Chief Operating Officer of the Protectorate, sets out to find and neutralize Adam before the sources of his illness are revealed to the rest of their “perfect” society.

The majority of the novel is taken up by these three storylines: Adam and Lock’s growing relationship (they basically move from The Bickersons to The Bickersons in love), Adam’s integration into Bideshi society and culture (complete with magical/medical treatment and rites of passage), and the resumption of the conflict between the Protectorate and the Bideshi, who were originally one culture and society.

There’s a lot to like here. The writing is smooth and enjoyable and the initial setup crackles with promise and action. The worldbuilding has elements that recall Gattaca, Babylon 5, and other film and TV contexts while still feeling original. Adam’s stunned realization that he is about to lose everything is a gut-wrenching read, and I was immediately invested in his fate. The scenes where he makes the decision to hack in and steal credits and his rescue by Lochlan are also really well done. And the early scenes from Lochlan’s POV, while a bit confusing at first, make it clear that while this is Adam’s journey, the cast is going to be large and interesting.

The first few chapters hooked me sufficiently that I gave the text the benefit of the doubt when Adam landed on Ashwina, the Bideshi ship Lochlan and his friends and family were on. The ship itself was imaginatively realized:

What Adam and Kae emerged into wasn’t the carefully manicured landscape of the Protectorate reserve. The staircase led up to a small alcove at the bottom of a twenty-foot cliff, and what looked like bedrock made a shallow foyer around them. For a moment, Adam just stared, for every inch of the rock had been carved in whirling, curved lines, chasing each other until they faded.

Here, with the fresh smell of grass wafting across his face, Adam felt like he’d been transported out of the ship. The grasslands that spread out before them had to be miles wide, the arching glass above tall enough to capture clouds. A river cut through the lowlands, wildflowers spilling down over the banks. In the distance, he could see the curved walls of the ship, but they were hazy with atmosphere, indistinct. Adam tipped his head back, skin warm under the sunny light.

The social-cultural depiction of the Bideshi was more problematic for me. First of all, the name bothered me: bideshi (or videshi) means foreign, exotic, and/or strange in several Indo-Aryan languages. While I can see why the Protectorate called them that, I found it odd that they would use that term themselves (ethnic groups don’t generally label themselves as foreigners). The people themselves are dark-skinned, short, religious/spiritual, and believers in magic and the power of nature, while their Protectorate counterparts are tall, blond, handsome/beautiful, and science-oriented. It was hard not to see the “noble savage” stereotype underlying the Bideshi characters, and this tendency was reinforced by their unalloyed kindness and goodness. On the occasions they expressed anger, it was righteous anger, and except during major conflicts they rarely expressed negative emotion (apart from irritation).

I liked spending time with the characters, and they weren’t all the same by any means, but they were pretty one-dimensional. The Protectorate characters, with the exception of Cosaire, were surprisingly more nuanced, and the exchanges between Cosaire and the Protectorate detective, Aarons, were among the most interesting in the book.

With the Bideshi being wonderful and the Protectorate being at best wrongheaded and at worst villainous, there really wasn’t much tension in the story. A skirmish between them in the first half of the book made it apparent to me that I needn’t fear seriously for the lives of any of the characters I was supposed to be attached to. A bigger problem, though was the vagueness with which some of the major scenes were depicted. Adam undergoes a “naming” ceremony which makes him part of the Bideshi community, and I had a lot of trouble figuring out precisely what that entailed or what would have qualified as “failing” the ceremony, which would have been a big deal.

Similarly, the climactic battle was severely underwritten. There were some nicely done aerial dogfights earlier in the novel, but the truncation of the ultimate confrontation left me frustrated, and I never did fully grasp what was happening to Adam during that time.

The romance between Lock and Adam is considerably less detailed than you find in a typical m/m romance, and while I was willing to believe their attraction and romantic journey, I had to read between the lines. I really appreciated that there were a variety of non-straight characters. While Adam is a closeted gay man (the Protectorate enforces cis-gender and heterosexual norms), Lock is bisexual and there is also a trans* character. Overall, the sexual orientations and gender identities of the characters aren’t that big a deal, which is refreshing.

I enjoyed reading Line and Orbit, but when I finished I was left dissatisfied, because the characterizations and the resolutions of the various storylines were either more predictable or less interesting than they could have been. Thinking it over, Lochlan and Cosaire were the most interesting characters in an on-page sense, but they were irritating and overly villainous respectively. Adam started out interesting but then veered into Matrix-like “The One” territory, and Kae was just too patient and wonderful.

I’m interested in seeing what the upcoming sequel to Line and Orbit looks like, as well as Moraine’s new fantasy novel, but I want less predictability and please, no more magical “traditional” cultures. Grade: C+