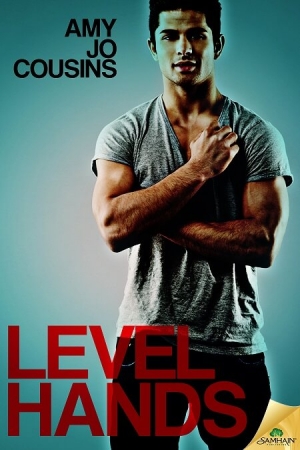 After the success of The Girl Next Door, where I first met Denny and Rafi (short for Raphaelito), and the reveal of yet another gorgeous cover (forearm pr0n!) I had high hoped for Level Hands. Unfortunately, it was not as successful for me. Some of my reader friends have had a much more positive reaction to it, so perhaps I’m an outlier.

The story picks up two years after the events of the previous book. Cash and Steph are still going strong and have moved to Boston, where Cash is running a soccer program (as foreshadowed in The Girl Next Door). Rafi has taken up rowing after being introduced to it by Denny and Cash has kept his promise to help Rafi get into college.  Rafi has been awarded a full ride rowing scholarship to Carlisle College for a year.

The scholarship is problematic for Rafi in a number of ways. It is only for a year and he feels he has to prove himself both academically and athletically speaking in order to “be allowed to stay”. He grew up in low socio-economic area with a mainly [email protected] population. Carlisle is wealthy and it is populated by lots of rich white people.  In fact, that was the driver behind the rowing alum scholarship – to promote diversity.  It was entirely understandable to me that Rafi would want to settle into Carlisle “on his own”. Denny’s family (he and Cash are cousins) are not-all-that-obliquely responsible for Rafi being there at all. Rafi feels he has to prove himself and stake his own claim on Carlisle. He was invited to apply for the scholarship and, it is apparent, he was the only one invited to apply. He is both a test case and a ring in and he feels that status keenly. He’s also proud and defensive – he doesn’t like to ask for help and he doesn’t want to appear a beggar to Denny.

Denny comes from a very wealthy family. His problems seem comparatively trivial to Rafi. He seems to coast and from Rafi’s perspective, everything comes easily to him. Rafi has had to struggle for everything – sure he was “awarded” the scholarship without too much effort, but now he has to struggle to keep it and to be worthy – right?

Rafi is Dominican and identifies as both black and Latino (ie, Afro-Latino). And he’s gay. He’s hoping for the best, but expecting that he will have to continue to deal with racial micro and macro aggressions, homophobia and bigotry as well as being judged as lacking because he’s getting a free ride to college (and possibly displacing a better rower and “more deserving” candidate).   All of that is well spelled out in the novel and I felt for Rafi as he tried to find his place and his equilibrium.

However, in terms of story, I don’t feel that Rafi moved forward with dealing with much of his problems until near the end of the book. Rather, there was a constant push-pull between he and Denny and it took 200+ pages before Rafi opened up and told Denny how he really felt about a lot of things. For me, it meant that I wasn’t entirely sold on the HEA – I wanted to see them working out their issues on the page. But the story ended with a commitment to work on their issues and an assumption I didn’t quite buy, that they would and would be successful.

Rafi is impulsive and hot-headed. I didn’t take it as a [email protected] stereotype – his pugnaciousness seemed realistic to me given his background  (and of course his ethnicity is part of that) but it felt real and fleshed out and not just something to stick on a character for points.  However, Rafi’s impulsiveness made me cautious about the HEA as well and, his “grand gesture” seemed another impulse and not particularly well thought out.  As one of the other characters tells Rafi when he asked how he can prove he won’t fuck up in the future, the answer is “Don’t fuck up.” Actions speak louder than words and sometimes it takes time for those actions to make a statement.

It isn’t that I became annoyed by Rafi’s very real challenges. What frustrated me was the one step forward/two steps back dynamic between Rafi and Denny – I’m in it for the romance after all. They’d tentatively get together, then Rafi would pull away, then they’d inch together again and Rafi would say he’s in and then something would happen and it would be all over red rover. Rinse. Repeat. It went on a little too long for me and the meat of the story came too late in the piece for me to be truly satisfied.

Because the story is told only from Rafi’s (deep third person) POV, Denny doesn’t have much of an arc. There was a section where Denny pulled away and I can’t say I clearly understood why that happened.

I liked the rowing stuff in the story – the terminology, the training and the regattas. It seemed well researched and lovingly told. And I thought the challenges and pressures Rafi faced at Carlisle were authentic. You portrayed the tension between wanting to belong on one’s own merits and needing help to do so well and Rafi’s struggle with it seemed realistic. I liked the support he received from his friend Bree and from his philosophy professor as well – I’d have liked more of them both actually.

Rafi spent so much of the book all up in his own head. I’d have liked more action and more openness from him earlier on. You did so well showing me what the differences were between Denny and Rafi and the challenges they faced to build a successful relationship, that unfortunately, what was on the page didn’t quite convince me.

I could have wished for the bigot in the rowing team to get a greater comeuppance but on reflection, Rafi taking control of the situation was satisfying and probably realistic. He knows he’s going to be dealing with bigots, classists, homophobes and xenophobes throughout his life. It’s all well and good to say that the world shouldn’t be like that but the fact is, it is like that and no-one can control for dickheads (alas). Rafi dealing with these issues in the ways that worked for him made sense and felt real.