REVIEW: Let Me In by Callie Croix 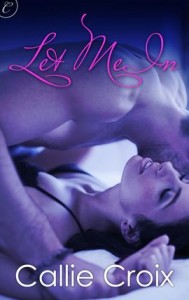 I’ve read a series of contemporaries lately with military heroines–it’s great to see romance at the forefront of giving those who serve in Iraq and Afghanistan their due. In Let Me In, Talia is a Marine coming home to Denver for her Thanksgiving break. It looks to be a depressing trip for her–she’s there to check on the only family she has, her mentally ill mother Kiyomi. Talia plans to spend the week alone in a hotel and is startled, when she arrives at the airport, to find her best friend Angie Brodie there to pick her up. Accompanying Angie is her older brother Liam whom Talia’s had the hots for years. He’s an ex-Marine now working as a military contractor and the two have always clicked.

The endearment triggered a smile and set off a bittersweet ache beneath her ribs. He’d always called her that, though he never meant it the way she wanted him to. A result of her own doing, but she’d made the right choice when she’d drawn the line between them at friends from the start, more than two years ago. Crossing that barrier would mean she risked losing him and his family forever if things didn’t work out between them. She’d never risk that. “Thanks. I can’t believe you guys did this for me.”

Liam finds Talia’s insistence that he stay out of her bed frustrating because he doesn’t understand it.

It drove him crazy that she always kept herself at arm’s length from him, but he loved knowing she was aware of him as a man. God knew he was more than willing to satisfy whatever needs she kept buried beneath that cool exterior, sexual and otherwise. For whatever reason, she wouldn’t acknowledge her interest.

Ten minutes later Liam pulled into the driveway of his parents’ white Colonial-style house with dark green trim, and a pang of emotion hit her square in the chest. This place, this family, meant more to her than they’d ever know. The house suited them perfectly. It looked like a Leave It to Beaver kind of place, something out of a Disney movie. Full of love and laughter and…family. She treasured each moment she’d spent here, ever since Angie had first dragged her home for dinner over two years ago.

Talia’s own home life is a tragedy. She’s an only child and her mom, who has always struggled with sanity, has become a compulsive hoarder. Talia, after sharing a picture perfect dinner with the Brodies, lets Liam give her a ride to her hotel. On the way, she has him drive by her mom’s last known address where she doesn’t find her mom—Kiyomi is out at Bingo night—but does find an eviction notice and a worried neighbor who tells her the landlord is coming by tomorrow to clean out the house and throw her mom out. Talia isn’t surprised—she’s used to dealing with the chaos and disappointment of her mom’s illness, but she’s still upset and embarrassed. When Liam takes her to her hotel, she tries to dismiss him, but he insists on staying and finding out what’s going on. She says she’s not interested in talking and he says, OK, fine, grabs her, and starts kissing the hell out her. But even though it’s the most amazing kiss she’s ever had, she still pushes him away.

He held her in place easily with his body, taking complete control.

That show of male dominance, his ultra-sexy confidence that told her he knew exactly how to please a woman, triggered something dark and needy to unfurl inside her. She’d heard things about him, from some of Angie’s friends and a few of his Marine friends she’d met overseas, about him liking control over his partners in bed, and now she knew it was true. Dark fantasies of being tied up and at his mercy swam through her mind, turned her body liquid. If they had sex he would take over entirely, render her helpless and make her beg for more, scream his name as he fucked her. And she’d love every second of it.

It scared the hell out of her.

Clinging to what remained of her sanity, she dragged her mouth away. “I can’t,” she panted in a ragged voice. “I can’t do this.”

Liam, though, is a determined guy and he’s not letting Talia evade him. He leaves that night, but come back the next day and goes with her to deal with the disaster that is her mom. For me, the most interesting part of the story is the accurate and sympathetic portrayal of Kiyomi and her accumulated stuff.

The entire house was choked with endless piles of junk, from the floor to halfway to the ceiling in places. She couldn’t even see the furniture anymore. Every surface was swallowed by mounds of clothes, papers, books, the never-ending garage sale items her mother obsessively brought home. The clutter was so bad it blocked out the light from the windows, piles of it extending into what used to be the family room and into the kitchen beyond.

Some people buried their pain and disappointment in life with alcohol, food or drugs. Her mother had chosen instead to bury hers in mountains of useless junk.

A strange roaring sound filled her ears. Her brain refused to process what she was witnessing. It was worse than she’d ever seen it. She couldn’t even pick out the chairs or tables she knew were hiding beneath it all. Furniture Talia had bought and paid for the last time she’d been home, when she’d moved her mother in here after completing the intensive therapy she’d finally agreed to. The betrayal bubbling up inside her hurt almost as much as the disappointment. Her mother had sworn she’d changed. Had vowed she’d dutifully followed the instructions her therapist had given her over the course of her treatment.

It’s easy, once you see how messed up Talia’s mom is to understand where Talia’s fear of losing the Brodies comes from. It’s not so easy–in fact it’s frustrating–to understand why she keeps pushing Liam—a strong, caring, confident man who cares for her—away. I found Talia’s insistence—especially after she starts having off the charts sex with Liam—that the two can’t have a romantic relationship annoying and cowardly. This conflict—I love you but I can’t have you—is unnecessary and feels forced.

Far more believable is Talia’s sad relationship with her mom. This novel does a nice job of showing how devastating mental illness is to both patients and their families. It was heartbreaking to watch Talia try to solve her mother’s problems—Kiyomi needs professional help and the willingness to take it. I liked watching Talia free herself from her own unreasonable expectations and from her fear others will reject her because of her mom’s insanity.