When Jane sent me the arc of your upcoming book “Just Like Heaven,” I was torn. On the one hand, it’s a Julia Quinn book and I’ve adored so many of your past books. On the other hand, some of your most recent books haven’t worked for me. I think the last one I even tried turned out to be a DNF. “But,” said my self, “It’s a Quinn. And look at the back blurb – it’s got Bridgertons. And Smythe-Smiths!” Well, that did it for me. As Lady Danbury says, someone’s got to clap for those poor girls. 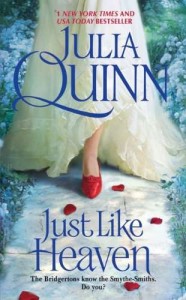 Marcus Holroyd is very much like any other Regency nobleman. His parents conceived him then basically left him to nurses and tutors to raise. He went to Eton and there met Daniel Smythe-Smith who befriended Marcus and invited the lonely young boy home for holidays where he became almost one of the boisterous Smythe-Smith clan. The youngest sibling by far was Honoria, who tried to tag along with her beloved brother and Marcus but who, as young sisters are wont to do, usually ended up getting in the way.

Now everyone is all grown up and due to a duel and a vengeful father, Daniel has had to flee to Italy. But before he leaves, he makes Marcus promise to look after unmarried Honoria and screen her suitors. After a year of this, Marcus is tired of glowering at fortune hunters while Honoria is puzzled at her lack of suitable marriage offers. Daniel’s disgrace has sent his widowed mother into a tailspin and Honoria is desperate to escape the pall over her family name and the move her mother intends to make to boring Bath.

When Honoria travels to a friend’s country estate near where Marcus lives with the intention of scouting for husbands there, the two meet up again. Due to one of her schemes, Marcus ends up injured and if not for Honoria and her mother, would have died. It’s during the difficult nursing that the scales finally fall from their eyes. However in true romance novel fashion, Honoria discovers Marcus’s pledge to Daniel and misinterprets Marcus’s intentions towards her. She and her mother return to London and the upcoming annual Smythe-Smith musicale. Can Marcus convince Honoria that he loves her for herself and not some silly pledge? Can Honoria get her cousins to practice the difficult piece for the upcoming event? And will the invited London ton be able to find enough cotton to stuff their ears and survive another “musical” offering from the women of the Smythe-Smith clan?

As I read the book, it dawned on me that not much actually happens in these Bridgerton offshoot books. Not much plot-wise anyway. It just seems like a lot of nattering on and wittering about and screwballish type internal and external dialogue. On and on, natter, natter, natter. This worked better for me when it’s Marcus and Honoria interacting but less well when Honoria is talking with her friends or female cousins. Those later conversations tend to slump into almost childish “Did not!” ” Did too!” ” Did not!” ” Did too!” exchanges. I half expect one of the characters to end it by sticking out her tongue.

I know I should remember who some of the background and incidental people are throughout the book and at the performance. I remember Lady Danbury and obviously Colin and Gregory Bridgerton plus Penelope’s sister but some of the others have escaped my memory after this many years since reading those books. Who is Miss Wynter? In her martial attempts to arrange marriages, Mrs. Royle is a force to be reckoned with. Were I a young man of good family, I’d be ducking and dodging from the likes of her too.

Ah, the state of medical care at the time. Abysmal is too kind a term. But what didn’t kill Marcus got him a wife so all’s well that ends well. I found this section to be the most interesting and enjoyed the moments when Honoria’s mother pitches in and saves the day. There’s real meat to the narrative and less dithering. Intense emotions instead of circular talk, talk that does little to advance the plot and seems to serve only to get some laughs.

The romance is more the “can’t see what’s under your nose” type. Both almost simultaneously realize their true love but of course it takes a while before they finally get together. I do love Marcus defending Honoria against Mr. Grimston – charging into the public eye, which he hates doing, then forcing a real apology. The public proposal, while sweet as honey, doesn’t come off as very believable for the time but then compared to the whole book, it’s about as believable as the rest of it. I also puzzled that there isn’t more about Honoria’s red shoes given the fact that they are featured in the cover art. It’s not that anyone except Marcus notices them and then only after Honoria told him about them. Maybe they, along with the shared love of chocolate cake, are supposed to be quiet thing only between Marcus and Honoria.

“Just Like Heaven” is the closest thing so far to a backstage pass for a Smythe-Smith musical performance. Honoria seems to have figured out the true meaning of it all. It’s family, it’s tradition, it’s togetherness and that is why I can see her evolving from “we’re terrible” to “it’s my cousins and me” to “I can’t wait until my daughters are up on that stage.” I can just see great granddaughters doing a ragtime version as their family grit their collective teeth and cheer them on.

While the book doesn’t reach the level of enjoyment I’ve gotten from my favorites – “Romancing Mr. Bridgerton,” “The Viscount Who Loved Me” or “The Duke and I” – it’s nice to revisit the relatively harmless world of Bridgerton London. It is what it is and that is a pretty soap bubble that floats and entertains. Maybe there will be more substance to Daniel’s story, which I assume is coming at some point. This one leaves me with a genial smile even if ultimately I probably won’t remember much about it. C+