REVIEW: Into the Shadows by Carolyn Crane

Recently Jane reviewed the third book in your romantic suspense series The Associates, Into the Shadows, and gave it a B+. I read it around the same time and while I liked some things about it, my reaction overall wasn’t as enthusiastic. I’m feeling short of time today, so readers looking for a plot summary can go read Jane’s review or make do with the book’s blurb: 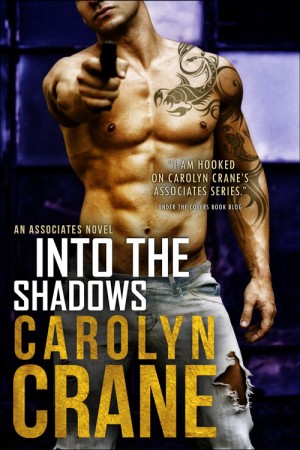 HE’S WORKING FOR THE GOOD GUYS. THAT DOESN’T MEAN HE’S ONE OF THEM.
HE’S A KILLER.
Thorne McKelvey knows exactly how Nadia sees him—as a brute and a killer just kinky enough to play her sexy games. And that’s how it has to stay. Leaving her was the hardest thing he ever did, but his undercover mission could blow up at any second. No way will he drag Nadia down with him.

SHE CAN’T RISK HER HEART.
Maybe it was foolish to fall in love with her late father’s deadliest henchman, but Nadia Volkov’s not sorry; without Thorne she wouldn’t have their beautiful little boy. There’s nothing she won’t do to protect Benny, which means she must hide his identity—especially from his father.

Now Thorne has burst back into her home, searching for clues to a gangland mystery…and stirring a hunger Nadia hasn’t felt in two years. But Benny’s identity isn’t the only secret she’s keeping, and things are turning deadly. Can Thorne and Nadia trust each other long enough to stay alive and have a chance at happiness?

The heroine of the story, Nadia, is great. She is the daughter of a now-dead gangster and despite that she has a great deal of honor. She has also grown from what Thorne, the hero, calls “the Party Princess” into a mature adult determined to rescue her mother from the gangs and protect her son at the same ime.

One of my favorite things about Nadia is that she has a talent for making others embrace themselves, warts and all. Rather than demanding perfection from people, she celebrates their flaws. How cool is that?

I also really liked Thorne’s growth arc from loner to someone who learned to trust others and accept help when he needed it.

Thorne also has a disability, a “bad hand”, and kudos for never once having him wish his hand was different. I had just come off of another book where the hero had the same disability but took forever to accept it despite having been born with it. Thorne wasn’t born with his disability but he’d had it for a number of years and for the most part I felt he dealt with it rationally.

Though Into the Shadows is part of a series, I was never lost. The sequel baiting was limited to scenes in which the other Associates had an actual role to play in the story and I appreciated that. Thorne and Nadia’s romance is also wrapped up in this book.

The conflict between Thorne and Nadia centered around a misunderstanding (Throne, with good reason, had come to think he was nothing to Nadia) and a big secret—that Thorne was the father of Nadia’s baby.

Nadia has a good reason for keeping their son’s paternity a secret from Thorne; she doesn’t know Thorne is undercover. She thinks he’s a gangster and doesn’t want her child to be a target.

I liked the narration. Thorne has a fondness for a word he makes up, “lovehate” and he uses it like a verb.

At the same time, though, I had several problems with the book. Thorne and Nadia’s kink of choice in the past had been for Nadia to call Thorne a lowlife and a thug while they had sex. The problem I had with this was that Thorne thought she really meant it, to the point that when she wanted to sleep with him without putdowns, he resisted.

On the one hand, this wasn’t a dynamic I’d seen before, so it added some freshness to the story. But on the other hand, I wasn’t always comfortable with it, especially in light of how the narration kept emphasizing that Thorne was really messed up

At the same time, so much was made of Thorne’s fucked-up state and his being an “emotional basket case” that I had trouble buying that. His lone wolf routine felt extreme to me, too. All of that kept me from emotionally connecting with Thorne’s character.

I felt like part of Thorne’s backstory was missing. He had taken revenge on Hangman gang leader Jerrod’s original gang for the death of his sister, but his father played a role in what happened to her too. I would have thought Thorne would be even angrier at his father for what he did to his own daughter, but I saw no mention of any vengeful impulses toward his dad. I know killing your own father isn’t romantic, but the backstory was such that this omission felt glaring.

I also felt that the misunderstanding Thorne had about what he’d meant to Nadia dragged on too long.

The bottom line for all my Thorne issues, what ended up being the cumulative effect of all of them, is that Thorne as a character just didn’t ring true.

Although I liked seeing Nadia raid the gangs’ warehouses in order to rescue her mother and other women who were held there as slaves, I wondered if it was something the single mom of an eighteen month old would take on. Had something happened to Nadia only her half-sister Kara would have been left to raise her son.

The premise behind The Associates struck me as cheesy. At one point Zelda, who is a member of The Associates, defines the organization this way: “The Associates were a private force for good—however the hell she and Dax cared to define good.” I had to roll my eyes a little when I read that because I just can’t imagine a real life private organization with that kind of mission statement.

I’m also of two minds about the gangster milieu. I liked the way that was woven into Nadia’s backstory and into her goal of finding her mother, but Hangman, the gang Thorne infiltrated, wasn’t nearly as interesting to me. There were times I got tired of reading about the gang. Jerrod was too evil a villain, but I did like a couple of the other Hangmen, Miguel and Skooge. I also liked Richard, Nadia’s friend — for once the gay best friend was portrayed with some freshness.

This book was a very fast read and I give it some points for that. But while I didn’t mind spending $2.99 on it, it didn’t leave me with a desire to read the other books in the series. For me this one is a C+.