REVIEW: Into the Crossfire by Lisa Marie Rice

About a month ago, I went on a reading binge of your books. As I stated in my previous summary, you have some writing tics that carry from book to book and Into the Crossfire is no exception. The hero is Sam Reston, a former Navy SEAL, who is part owner in a paramilitary organization. I admit that during the story I kept wondering how realistic his position was but everything about this story is over the top and hugely exaggerated and for that reason, the story seems more fantasy than grounded in some authentic contemporary setting. 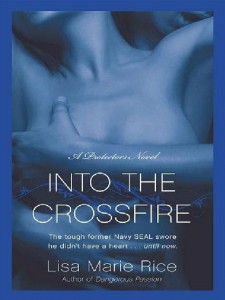 The story starts out from Sam’s point of view and he is a primary narrator of the story. He has been undercover for a big shipping company to help them ascertain what is happening during transhipment of goods. He infiltrated a gang of dock thieves and smugglers and whenever he turned up at his expensive offices, he’s looked like a derelict and he instinctively knows that his “own personal wet dream” would never take a chance on him looking as he did. So he has just watched her.

He remembered every second of the moment he’d first laid eyes on her. Two weeks, three days and thirty minutes ago. But who was counting?

One thing that you do so well is convey that the heroine is the sole focus of the hero. It is all he can do to walk and talk when he is near her. His entire head is filled thoughts of her, the smell of her, the desire for her. That’s some pretty powerful fantasy. This is what carries the story over the obvious weaknesses and the almost laughable campiness of the story.

Nicola Pearce is a woman who is hanging by a thread. She rented a tiny studio office in a luxury office building to house her translation services, hoping that the location would help with business. Her once vibrant father is in failing health. Her money is sorely depleted by paying for expensive health care. She needs one good thing to go her way and when the story opens, the one good thing that needs to happen is for her to get into her office to make a conference call to a potential but demanding client. The one good thing is not for “Lowlife” as she has dubbed this dangerous, dirty looking man who has been there “every time she turned around, it seemed.”

Opening the office door for Nicola is just the start of the saving she enjoys at the hands of Sam Reston. Nicola initially doesn’t want his help, particularly when to get it she has to have dinner with Lowlife. But he allays her fears by opening a cell phone and engaging a video conference with the mayor (at this point, all I can think of is did LMR know about Face time and the iPhone before it came out!!).

There’s nothing really wrong with the setup but as the story progresses, particularly when the suspense element is inserted, it just kind of proceeds to be a bit ridiculous. It’s not really a story I could read with any seriousness. Everything is amplified. The book takes place over three days. Three DAYS!!! Within these three days, Sam and Nicola go out to dinner, Sam saves Nicola from several attempts on her life, and they have marathon sex. I think it was the sex that made the story really go over the edge.

The two only have one real sex scene (despite this being an Avon Red) but it lasts forever. They have sex for three hours straight, both orgasming multiple times. They break for food and go back at it. They “made love all night. Literally.” He comes every time he enters her. Every time. Sam’s ability to ejaculate is world class, as if we weren’t already convinced of his manliness, we needed to be aware of the enormous reserves of semen. (As if to impress upon us his ability to procreate? As if we were cave woman trying to determine the worth of a partner by their ability to further propagate the species?)

And then she was aware of something else. Wetness between her legs, running down her thighs. For a moment, she thought she’d unexpectedly got her period, that her body had simply disobeyed the pill and gone ahead and had a period, breaking the hormonal schedule. An entire night of wild sex surely would be enough to knock her for a loop, hormonally speaking.

She looked down at herself, expecting to see drops of blood, but all she saw was a gleaming wetness.

Sam had shot a small lake into her during the night.

Nicola hasn’t been dating much because her father has needed extensive attention, yet, despite this she feels comfortable going off with Sam for the night. She’d even stopped dating because her father was deteriorating so rapidly. It never really made sense to me given that so much mental energy was given over to how worried she was for her father, she would leave him for the night and go to Sam’s condo. Why not just stay at her house and have the lake of semen shot into her body? Why would she go to his house?

So what about the suspense that takes place over three days? An Islamic terrorist has been groomed to take a position of power in the U.S. and has done so by becoming a Wall Street trader. Now all of his jihadist fantasies will come true when the orders come to execute a diabolical plan that will bring Manhattan, and thus the world, to its knees. Only one person may have seen something and sent an encrypted message to another person (aka Nicola) and she must now be eliminated. Good thing she has Sam and he is able to shoot something other than his semen.

While I enjoyed reading this, the suspense plot is thinner than a wafer and the love portion of the story requires huge suspensions of disbelief because three days? This isn’t going to work for everyone but it’s actually kind of a fun story if nothing is taken seriously. C+

This is a trade paperback published by Avon, a division of HarperCollins.