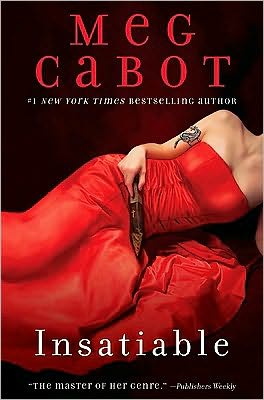 I’m not sure why I got a copy of your new book, “Insatiable” since I’m not the first DA reviewer who comes to mind when vampire books are being discussed but nonetheless it arrived in my mail and, since I hadn’t read any of your books in years, I found myself giving it a go. Yes, it’s about vampires but doesn’t feature a kick-ass heroine nor does it seem to have a ready made lineup of future heroes already set to go. It also doesn’t appear to be a standard UF either. And, despite a strong start, I did finish it with more than a few issues which keep me from a squee grade.

Meena Harper has a gift/curse which allows her to look at a person and see when and how they’re going to die. After realizing that most people view her as a freak, she now just offers advice on how to avoid death rather than specifics when warning people such as the young woman she sees on the subway. She also tries to avoid her ultra-rich neighbor who is always trying to fix Meena up or commiserate with her about her unemployed brother Jon.

But somehow she finds herself roped into attending the dinner party the Antonescus are having for a cousin from Romania and then falling in love with Lucien Antonescu. He’s tall, dark, handsome and the first man in a while she hasn’t immediately known how he was going to die. All things Meena likes. Lucien returns Meena’s feelings and finds in her someone who stirs him for the first time in…well, centuries. That’s because Lucien is already dead and not just a vampire but the Prince. And Meena is about to get right in the middle of a vampire war set to rage across Manhattan and the secret human society dedicated to killing them.

The humor I remember from the historicals of yours I’ve read is here. Snappy dialogue, funny character characterization, cute dog – I enjoyed all of this. There are some things which make me wince such as the name of Alaric’s sword. Senor Sticky? And would a man of his taste really wear a Goofy watch? Another thing which works well is the relationship between Meena and her brother Jon. They argue like siblings, have that shorthand communication thing yet seem to care for each other and have each other’s backs. And that is about the only reason I didn’t lose it when Meena refuses to tell Alaric and Jon where Lucien is. But more on that later.

Thank you for giving a believable reason – well, once I’d accepted Meena’s “gift” – for Lucien’s interest and growing feelings for her. Meena isn’t just the standard heroine with whom all men instantly fall in love even though she’s described as average and sometimes a PITA. Her years long practice in hiding her thoughts renders her mind hard for Lucien to read and then when he gets a taste – literally – of her ability, she becomes someone who is different from any woman he’s known in his long history of knowing women.

I didn’t miss the irony of learning all about how vampires can bend people’s wills into allowing themselves to become essentially “feeding bags” and then having smart, independent Meena start to do the same thing. She makes the same excuses for Lucien that they all do and yet he is different from the standard selfish vampires who only want to exploit humans. He’s smart and has learned that blending means survival. And it’s lucky for Meena that she falls for the one vampire who can be trusted – as she learns when she learns she can’t trust them all.

Which sets up one of the issues I have with the story. When Meena’s talent becomes known and the other vampires decide to use her for this and against Lucien as well, what does she do but turn martyr for endangering her friends, rush off with only one weapon and no plan then decide to give up when she considers all lost. Then, in the midst of an all out battle, she still bleats on about some of these vampires possibly being redeemed and rehabilitated? Got to tell you I finished this section of the book less than thrilled with our girl. And after a lifetime of hiding her talent, I would think she’d be a little more interested in finally having a chance to put it to use for people who would appreciate it and her. She somewhat reinstates herself in my good graces because she did withhold information about Lucien’s whereabouts because she honestly thought she was protecting people dear to her and not just to protect Lucien and because she ultimately decides to join the Palatine Guard.

This is obviously the first book in a series yet I’m not sure I’ll be reading any further. Though Meena pulls herself back from the edge of utter twitdom and seems determined to use her powers for good, she still seems like she could slip up at any moment and Lucien appears determined to help her do just that. I also don’t buy into the sudden change in Alaric’s feelings and can’t say I’m too interested in any love triangles. I didn’t end up totally disliking the book but a C+ is about as good as it averages out for me.

This is a hardcover published by HarperCollins, part of the Agency 5.