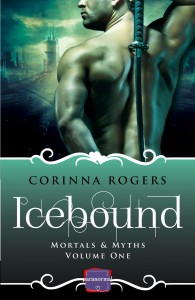 The first book in an intense, thrilling and erotic, m/m urban fantasy series from an exciting new author in the genre!
It’s been ten years since Shane Conell sold his soul to the Ice King in order to save the life of the man he loves. Correction, loved.
After ten years, it’s growing difficult to remember love, and hate, and laughter – until a chance appears to get back the only thing his frozen heart still wants…
Drake Young is doing fine. Really. He’s got a good job, nice benefits, and the soulless husk of his old lover only comes by to torment him every so often. However, it only takes the appearance of a creature from the Etherworld wreaking havoc on the decidedly nonmagical city streets to drag him out of retirement, forcing him to team up with the one person he can’t bear even to look at!
Now, Drake and Shane must race against the clock to keep their city from being destroyed, even if it means working together. And no matter how difficult it is to catch the creature, it’s a hell of a lot more difficult to resist the urges that ten years haven’t managed to kill.

detailed, graphic rape scene in the middle of the book.

I have to admit that the main reason I bought your book was curiosity. I was extremely curious to find out how an m/m fantasy published by one of the big publishers compares with the books from smaller presses where I usually buy m/m. Well, in some ways it was superior to those and in some ways it was not. I loved the writing, I thought the book moved fast and furiously when it needed to, and when the reader could have used a breather, the interludes (flashbacks really) came in handy. I am not a huge fan of flashbacks, but I thought in this book they were strategically placed and overall done very well.

I liked that I was thrown into this world without any info dumping and the information was revealed slowly as action developed. However, I was very irritated that at the end of the book I felt that I was still quite confused about how this world works. Yes, I understand that this is book one and book two will be published in a few months, and maybe all my questions will be answered in the book two. If so, I will be happy to eat crow then, but right now I can only discuss what I have read on page.

Drake and Shane had been lovers and hunters of all evil magical things for a while, but then Drake almost died and Shane made a bargain with the Ice King – Drake lives and Shane gives him his soul as a payment.

My questions started right from the moment this bargain was revealed early in the book, because I would have liked to know what exactly this bargain meant for Shane. It *looked* as if in this world, being soulless apparently meant that the person would not feel much emotionally.

“Shane probably doesn’t know how creepy he is now, to anyone who knew him before, least of all to Drake, who knew him best of all. He remembers effortlessly how alive Shane’s face, his eyes, had been. A comment like that would have drawn a response, something guilty-curious-interested-ashamed-mocking-amused, because Shane’s always been one to feel a million things at once. Now, he just nods. “All right. Let’s get in there and see what we get. And then we’ll find the Soul-Thief and you can fuck me again.”

At the same time Shane is certainly not zombified in the way a soulless person might appear in some other stories. At some point he says that he feels pain and lust just fine, then he mentions that he has shielded his feelings. And we also see at least one person become almost catatonic when her soul is stolen. Is Shane still’s very much alive and functioning, maybe not just feeling as strongly as before is due to whatever magic he has? I do not know, but I surely want to find out.

Since the state of his soul seems to be one of the central if not the central theme of the book, I understand if the author wants to keep her cards close to her chest in the first book. So let’s talk about more minor issues. What is going on with Ice King and his court? How have they been functioning before Shane was forced to become one of them, if what is happening to King’s vassals is eventually happening to all of them? How did Ice King appear in “our” world? How, how, how? I surely hope that the invisibility cloak will be taken off in the next book and we will see a complex and multilayered world- building, because right now I just have to keep telling myself that it is there and all will be revealed in due time.

I thought Shane and Drake’s backstory was revealed well in flashbacks, but their relationship in the present again confused me. I understand Drake’s anger to a degree – of course he wanted Shane to be like he was before he bargained “with devil” ( Iced King is certainly not the Devil, but neither is he a nice entity and I surely want to understand more about him eventually). However, I did not understand the intensity and length of his anger given that his boyfriend pretty much sacrificed his soul for him. I think I at least expected more compassion from him for Shane when the consequences of Shane’s deal manifested themselves. Soulless Shane also hurt Drake multiple times. If one thinks that Shane spoke the truth about not being able to feel anything but pain and lust while he did not have a soul, then maybe “the relationship” he had with Drake did some good for him. I don’t know. It was all once again confusing to me.

The story has a lot of sex, and, it mostly moved story forward, but I did not understand the need for the trigger I put in the spoiler cut in the beginning. I get that it serves as more punishment for Shane, and to show that Ice Court is not a nice court, but it came out of nowhere to me.

Despite the book being written from both Drake and Shane’s POV, I didn’t get a strong sense of Drake. I hope to get to know Drake better in the next book – him becoming Champion of the Church and not believing in God alone raises so many interesting questions to explore.

“You never prayed. Not once that I can remember, and I lived with you for ten years. Then all of sudden, what, I’m gone and you find God?” That’s what’s bothering him, Shane realizes. No matter what Drake’s title might be, there’s not a single religious item anywhere in the room”.

The book ends with very tentative HFN, with Shane and Drake being much happier and together, but there are still so many issues between them and I do hope that the world will be clearer to me when the second book comes along.