REVIEW: I Was Told It Would Get Easier by Abbi Waxman

JayneBook Reviews / C+ Reviewscollege / Contemporary / family relationships / Fiction / lawyer / mothers and daughters / single mother / teens / Womens-FictionComments Off on REVIEW: I Was Told It Would Get Easier by Abbi Waxman 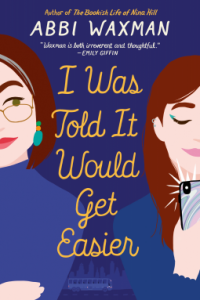 Jessica and Emily Burnstein have very different ideas of how this college tour should go.

For Emily, it’s a preview of freedom, exploring the possibility of her new and more exciting future. Not that she’s sure she even wants to go to college, but let’s ignore that for now. And maybe the other kids on the tour will like her more than the ones at school. . . . They have to, right?

For Jessica, it’s a chance to bond with the daughter she seems to have lost. They used to be so close, but then Goldfish crackers and Play-Doh were no longer enough of a draw. She isn’t even sure if Emily likes her anymore. To be honest, Jessica isn’t sure she likes herself.

Together with a dozen strangers–and two familiar enemies–Jessica and Emily travel the East Coast, meeting up with family and old friends along the way. Surprises and secrets threaten their relationship and, in the end, change it forever.

I didn’t even read the blurb for this book before asking to read it but once I had, I realized that it would be different from “The Bookish Life of Nina Hill.” Yes, there would be a young woman and there would be family but it didn’t appear that there would be a romance in the offing. This turned out to be mostly true. The blurb pretty much lays out the plot – except for the part about Emily’s friends not liking her. Emily has her friend set but we all know about high school with its shifting sands of relationships. Other than that, yeah, the blurb pretty much covers it.

The journey will expose the generational divide between parents and children, between Jessica and Emily specifically, the bragging rights parents are after through their children, plus the insane pressure everyone is under in order to get the best grades and secure their future via acceptance into the best schools. Several adults wistfully recall that they didn’t have this killer Prime Directive that makes high school hell for their children and I have to agree with them. Recently a friend and I discussed the fact that when we applied to college we didn’t have to have cured cancer or saved the whales before admissions officers would even look at our transcripts. There was also no “Varsity Blues” scandal then and I never even thought about cheating on my AP tests.

The relationship between Jessica and Emily sounds true but despite social media that is supposed to connect everyone, they still manage to misunderstand each other and view things very differently. Jessica’s job issues – an overbearing boss, workplace sexism, long hours, and worry that she’s lost irreplaceable time with her daughter while earning the money that has covered extortionate private school expenses and will pay for college are realistic. The one thing that Jessica truly feels guilty about though is the knowledge that she also enjoys her job and probably wouldn’t have been a better mother for having been home more.

Like most teenagers, Emily is ready to be embarrassed by her mom at a moment’s notice, worries about high school social hierarchy and grades and now wonders if after all this pressure about college, she even wants to go. Most of the other teens on the trip seem to have figured out what they want and where they need to go – so why can’t she?

There’re subplots about bribery and cheating that frankly weren’t hard to figure out. Jessica and Emily both have revelations about themselves and what they want from life. These also weren’t major surprises by the time the book gets to them. Most everything is hinted at at least once if not several times and there aren’t any surprises by the end. This is a nice book and an honest look at the issues it presents but hardly groundbreaking. Though it’s filled with the witty snark that I adored in “Nina Hill,” lots of what is said is repetitive since we’re seeing alternating viewpoints from Jessica and Emily and enough things fizzle or are left without resolution (though honestly these are fairly minor, still …) to be slightly annoying. I enjoyed my time reading it but I doubt it’s a book that will stick with me long. C+