REVIEW: I Dream of Danger by Lisa Marie Rice

If you’d asked me before I read I Dream of Danger if you could beat the over-the-top wackiness of the first book in your Ghost Ops series, I’d have said no.  I mean, come on, that book, Heart of Danger (reviewed here by Jane), features heroes from the “famed SEAL Team Six” that took out Bin Laden. Ten years after Bin Laden’s death, a subset of Team Six is now an elite secret military unit called “Ghost Ops.” The men were framed for an illegal attack on the US and were court-martialed. Before the trial, the entire group vanished, and are now considered hostiles by the US government.  Several of them made their way to a place deep in the mountains of Northern California and created a completely hidden from the world oasis funded by money (called, duh, Haven) stolen from evil drug lords. Other non-Ghost Ops folk who needed to disappear have found their way to Haven which has futuristic technology, delicious organic food, and anything else one could want other than the ability to leave. In Heart of Danger, so many crazy things happened in such a short period of time–it was like watching a Michael Bay movie on fast forward. I Dream of Danger is like watching a Michael Bay movie on fast forward while riding a roller coaster equipped with laser guns and water balloons. (This exists.) 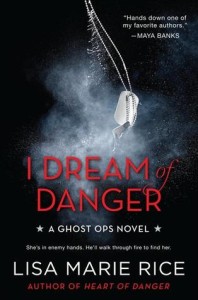 The heroine, Elle Thomason, is a neuroscientist who works for Arka Pharmaceuticals, an exceedingly evil company run by lunatics. Elle, like most of the other brilliant scientists who work for Arka, has no clue the head honcho, Dr. Charles Lee, is trying to make a drug enhanced cadre of super warriors so he can help China rule the world and become a high-ranking official in Beijing. Elle’s area of study is telekinetic powers, specifically Astral Projection, which she can actually do.

Elle has spent her entire life hung-up on Nick Ross. Her father raised him but Nick disappeared when Elle was sixteen (she suddenly turned into a hottie and he got a boner so he had to move out). He returned five years later to attend her father’s funeral, take her virginity and show her where her clitoris was, and vanished again. Despite not having seen Nick for ten years, Elle dreams (astrally stalks) about him constantly. She’s also doesn’t date because

…it seemed that the sex she’d had with Nick was exclusive to him. To her horror, nobody came even close to making her feel the way he did. Elle had actually felt repulsion with a lot of guys, not even wanting to be touched.

She wasn’t gay, so that was out. She was a heterosexual lock—and the one key that opened her was gone, forever. So she came home every night to her pretty, tiny apartment and tried not to wish that she were not so relentlessly alone.

While Elle pined, Nick joined the Rangers, moved up in the military, killed the most wanted terrorist ever, and became an outlaw in Haven. He’s obsessed with Elle and has spent years trying to find her but can’t (despite the internet) because she changed her name.

One night, after a grueling day at work–Elle’s both a researcher and a research subject which she knows is unprofessional but she does because doing so is helping to scientifically prove paranormal abilities are real–Elle gets a panicked video call from her co-worker Sophie. Their other co-worker/guinea pigs have all been rounded up by some goons at Arka and no one knows where they were taken. Plus, this thingee all the scientists have implanted in their arms for research purposes is really a tracking device. Elle can see figures surrounding Sophie and suddenly their connection goes dead. Terrified, Elle cuts the sensor out of her arm–it appears to be alive–runs out of her apartment, evades the four bad guys now chasing her, and checks into a seedy motel (in Palo Alto).

And who’s she gonna call? A GhostOpper! (Surprisingly, there isn’t a giant marshmallow man in this story.)

And it was because she was so weak and so depleted, because she reached some dark place of despair that held her deepest truths, that it slipped from her.

Something she’d sworn she’d never do, something that in any other moment she’d rather die than think, came welling out.

From deep inside her, it came. Totally unstoppable, torn from her.

A call so strong it was a scream inside her head.

Nick, who had been sleeping naked in his bed at Haven, jumps up, throws on his clothes, pushes (for the first time ever) the emergency button, dashes to Haven’s situation room, and throws a fit.

“Elle.” It was the only thing he could say. His head was going to blow up. Every single danger hormone in his body was awake with nowhere to go. He was a guy built for action, and he always knew which action to take. To be so primed, so pumped, so fucking scared and dying to race to the rescue but have no idea where was driving him bat-shit crazy.

However, with a little bit of help from the pregnant psychic heroine of Heart of Danger, super special spy equipment, and Google maps, Nick locates the exact hotel Elle is hiding in. He can also see she’s being hunted by large men in combat gear. He yells “Send me a drone,” jumps in his hovercar and zooms off to save Elle.

So here’s the thing: if this story is working for you, read I Dream of Danger. If you don’t mind the spectacularly unbelievable and the theory that really hot sex increases a person’s ESP, this book is tons of fun.

I particularly enjoyed the zany science and technology.  It reminded me of the scene from Thank You for Smoking where, when the scientific properties of oxygen mitigate a scene Rob Lowe wants, he says, “But it’s an easy fix. One line of dialogue. ‘Thank God we invented the… you know, whatever device.’” I Dream of Danger is full of such devices: gadgets, drugs, and weapons that only exist because this book says they do. Need a handheld device that is “the electronic equivalent of radar to detect any hidden detonators or trip wires” with “a radius of 500 meters”and a screen that stays blank? No problem. Jon, another GhostOpper, invented one. Looking for a drug that distills “parts of the brain into a liquid that can be injected”? Arka Pharmaceuticals is on it.

I Dream of Danger has an undercurrent of glee to it missing in many of Ms. Rice’s books. I prefer to think she’s laughing with us and not at us.

The plot–zombies! a mystical Faraday cage! the Governor of California is a Speilberg!–hurtles along. The sex, though restrained by Ms. Rice’s standards, is torrid, and Elle is one kick-ass neuroscientist. Plus it ends in a frenzy. The last lines are: “Let’s get going. We have a world to save.”

(From the zombified San Franciscans who just ate Anderson Cooper.)