I read and loved your debut novel, Fracture. It was such an unusual novel that contained some of my favorite tropes along with some elements I don’t usually see in the YA genre. So I’ve been looking forward to your future works. When I saw that you had a new book coming out, I snapped it up eagerly. 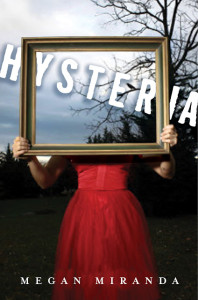 Mallory is infamous in her hometown. She’s just been cleared of killing her boyfriend. It was an act of self-defense. The problem is she’s not entirely sure. Her memory of that night has gaps. Worse yet are the ways in which everyone is treating her — including her parents. Not to mention the fact that her boyfriend’s mother is stalking her.

When her parents enroll her in a boarding school without her knowledge, Mallory is angry but ultimately resigned. It’s a chance to get away from the whispers and malicious glances. She can start over where no one knows her.

Unfortunately, when she arrives, everyone already knows. Some people befriend her anyway. Others — llike her new roommate — run away at the first chance they get. It’s hard to adjust but Mallory does her best.

However, Mallory soon begins to wonder about her sanity. There are signs that someone is coming into her room and messing with her things. No one believes her. Many people think it’s actually her and due to the gaps in her memory, Mallory isn’t completely sure they’re wrong. But when someone is found dead in her bedroom, all eyes turn towards her.

Standard YA paranormals and fantasies are wearing me out so I’m growing increasingly keen on thrillers and suspense novels. I was excited when I saw that was exactly what this was. But in some ways, I think my love for Fracture might have raised my expectations too high. What I loved about your debut was the emotional twists and turns. But Hysteria falls into a different subgenre that has different expectations. The emotional intensity of Fracture wasn’t here. Instead what we have is a heroine with psychological trauma who nevertheless must bear the heavy judgment of the people around her.

That said, I adored the friendship between Mallory and Colleen. I’m a big fan of strong female friendships, and they definitely had one. These are two girls who’d do anything for each other and do anything to protect one another. Their relationship struck me as being very true and genuine.

And for me, this is where the rest of the book begins to unravel. When one thing is done so well, the flaws of the other aspects stand out sharply. Since the book is told from Mallory’s POV, the narrative is funneled through her perspective. I understand the choice. She is meant to be an unreliable narrator. Throughout the novel, we are supposed to doubt Mallory’s memories. Was the murder really self-defense? Or was it something more sinister? Did Mallory get away with murder by falsely claiming self-defense? So when the strange things start happening to Mallory, we are meant to question whether they’re caused by someone else, by Mallory herself, or if they are merely hallucinations.

This is a very difficult thing to pull off, and Hysteria doesn’t quite do it. When we ultimately learn the truth behind the strange happenings and the boarding school murder, it rings hollow. We needed more information beforehand about one of the culprits to fully believe their motivations. As for the other perpetrator, that was out of left field. There was hardly any set-up for this revelation. And I’m unsure either of those things would be possible since the narrative was restricted to Mallory’s POV alone.

The burgeoning romance between Mallory and Reid was tepid for me. I wish that wasn’t the case. This is another instance of friends becoming more and that’s one of my favorite romance tropes. In Hysteria, the fathers of Mallory and Reid were old school friends so they knew each other peripherally growing up. They’re not best friends but they’ve known each other for a long time and only lost contact over the years due to the death of Reid’s father. In many ways, Reid’s utter faith in Mallory’s innocence didn’t ring true. I think we were meant to see their relationship as being prematurely ended in the past but the lingering pieces sparking to life when they meet again. Unfortunately, I don’t think that came through.

Perhaps if I were a bigger fan of boarding school mysteries and thrillers, I would be willing to overlook the flaws in Hysteria. I think this novel tried to do too many things — a girl’s unreliable memory of a night that changed her life forever, a boarding school filled with secrets, mean girl cliques, a friendship that stands strong in face of something that should have broken it, and a rediscovered love after so many failed romances — and tie them together in a pretty knot. A tall order and not one that succeeded here. Hopefully, I’ll have better luck with your next offering. C+

→ Jia
Previous article: BOOK CLUB: The One That Got Away by Kelly Hunter
Next Post: REVIEW: Anatomy of a Single Girl by Daria Snadowsky