REVIEW: How to Tame Your Duke by Juliana Gray

How to Tame Your Duke has the sort of generic title I approach with caution. (If it referenced a movie or a children’s book, I’d run screaming from the room.) Since your name was on my radar, I decided the book was worth a try. It turned out to be both more and less than I could have expected. 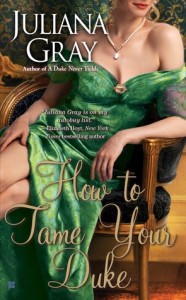 The three heirs to the principality of Holstein-Schweinwald-Huhnhof — this seems to loosely translate to pig forest-hen house — are princesses on the run. Their father was assassinated, and they’ve already foiled one abduction attempt, with the help of their exceptionally competent governess, Miss Dingleby. Now they’re in Victorian England, seeking help from their uncle, the Duke of Olympia — whose cunning plan is to disguise them all as men. Obviously the first in a series, this book follows the middle sister Emilie, sent to Yorkshire as “Mr. Grimsby,” to tutor the teenaged son of the Duke of Ashland.

Emilie is immediately drawn to the brilliant, gawky Freddie, and even more drawn to his massive, powerful father, who is exquisitely formed — at least on one side. On the right, he’s badly scarred and missing part of his jaw, an eye, and a hand. Yet after the initial shock, her fascination only deepens:

Emilie could scarcely see him at all in the darkness, but she knew that he was facing to his right, that he was shadowing his flawed side from her view. She sensed, rather than saw, the rise and fall of his chest as he breathed. The rhythm mesmerized her. What was he thinking, as he sat there with his steady breath and his steady heartbeat, while the wind pounded the carriage walls?

The first two thirds of the book are gracefully written, and although it has its share of historical romance cliches — brooding wounded heroes, late night library meetings, inconveniently amorous chambermaids, anatomically improbable deflowerings — it also has some pleasant surprises. The treatment of Ashland’s disability is matter of fact, aside from his personal angst. The secondary characters add a lot of liveliness, especially the irrepressible Freddie, who catches on to Emilie’s secret and seeks to make her his stepmother:

“I’ll help you, if you like. Warm him up a bit. Look here, Pater, have you ever imagined old Grimsby without his whiskers? He’d make a damned prime girl. Or else, That old Grimsby, what a priceless fellow. Make a fine wife, if only he were a she.”

And then there’s the shadowy presence of the Duke of Olympia, who in Ashland’s mind, “did nothing without reason.” Previous knowledge of Olympia, in fact, has Ashland first suspecting that “Mr. Grimsby” is meant to spy on him. The calculating mastermind pulling everyone’s strings is something of a type, but Olympia won my heart almost immediately when we saw him briefly in a tender moment with Miss Dingleby.

But the crux of the story is how Emilie and Ashland manage to fall in love, despite her disguise. I don’t want to spoil the plot, but they come together in a contrived yet highly tantalizing way, filled with a yearning and (at first) unfulfilled desire that melted me. It’s one of those intense, unexpected situations that stick in your mind long after the book is over, and Ashland’s struggle to be honorable, combined with his emotional vulnerability, make him irresistible.

About 100 pages from the end, the romance arc came to what felt like a natural conclusion and it seemed that with just a little bit of time spent on the suspense plot — which didn’t need to get completely wrapped up in book one — the story could come to a satisfying finish. But there were still 100 pages to fill and sadly, they’re almost entirely filled with nonsense. The story goes down the painfully well worn “I refuse to marry you!” path, which in this case feels not only cliched, but ridiculous. Gray set the stage well for anachronistic premarital sex, partially by giving Emilie a sense of rebelliousness and sexual curiosity, but mostly just because of her palpably intense attraction to Ashland. But attempts to make her refusal of Ashland seem in character land with a dull thud; it doesn’t feel like a natural or reasoned outgrowth of who she is, but just a forced knee jerk reaction.

There were some unlikely yet enjoyably passionate sex scenes, but I spent most of those last hundred pages constantly bummed out by how downhill the book had gone. The resolution to the suspense plot fit awkwardly into the story as a whole. Even the action scenes, which had had good comedic timing in the rest of the book, felt off.

I have to average my grade: a B that turned into a D equals a C, though I liked some of it so much, I’ll make it a C+. Because the prose is good, it may play better for readers who are less tired than I am of certain themes; I will certainly try another Gray book, hoping for a more consistently enjoyable read next time.