REVIEW: How the Marquess Was Won by Julie Anne Long

I’ve been reading your books since I discovered Beauty and the Spy back in 2006. Beauty and the Spy is still on my keeper shelf, and three others of your books have since joined it: The Secret to Seduction, I Kissed an Earl, and What I Did for a Duke. What’s more, I’ve read every book you’ve published since then. Even those I haven’t kept I have generally enjoyed or appreciated, so I am sad to say that your latest entry in the Pennyroyal Green series, How the Marquess Was Won, did not live up to my hopes. 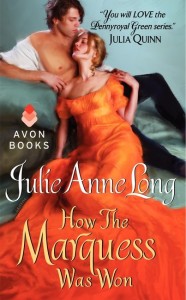 How the Marquess Was Won opens with a man stumbling into Pennyroyal Green’s pub, the Pig & Thistle. The man has been shot and when Chase and Colin Eversea rush to his aid, he identifies himself as the Marquess Dryden. Julian Spenser, the marquess, appears close to death, and although his reputation as a cool customer, “Lord Ice,” precedes him, he cannot stop talking about a woman who appears to have devastated him in some fashion. Chase sends for the vicar, an Eversea cousin, and the action then shifts six weeks back in time.

Phoebe Vale and “Jules,” as Dryden is called, first meet in Postlethwaite’s Emporium of Lady’s Goods. Phoebe, a schoolteacher, jokes with Mr. Postlethwaite, pretending to be wealthy. The two also gossip about Lord Ice, whose exploits are detailed in the London broadsheets, emulated by many young men and sought after by young women. Though Pheobe has never met the reckless Dryden, she believes she is an expert in that subject.

While at Postlethwaite’s, Phoebe picks up a letter from Lisbeth Redmond, a former pupil now being courted by Dryden. Apparently Lisbeth’s parents are in Italy and her mother wants Phoebe to act as “a suitable friend or chaperone” at a two day house party in the home of her aunt and uncle, Isaiah and Fanchette Redmond.

(I found this puzzling since surely Lisbeth’s aunt would have been a more appropriate chaperone than a twenty-two year old schoolteacher who, as we later learn, spent her early childhood in Seven Dials).

Phoebe is pondering the offer, inclined to accept, when who should arrive at Postlethwaite’s but none other than Dryden himself. He carefully selects a silk fan whose intended recipient is surely Lisbeth Redmond. Waterburn, a viscount with a penchant for wagering, enters the shop shortly afterward, and wagers Dryden that he cannot steal a kiss from the “unkissable” Phoebe.

A hurt Phoebe leaves Postlethwaite’s intending to turn down Lisbeth’s offer, but she runs into Dryden again when he arrives at her place of work, Miss Endicott’s academy for young ladies. Dryden is there on the behalf of a recalcitrant niece, and Miss Endicott asks Phoebe to give him a tour of the academy. There Jules and Phoebe make a connection – each manages to surprise the other – and Phoebe is well on her way to being in love with Jules, so much so that she not only reverses her decision about attending the house party, but also thinking—though she rejects the thought—that he is meant for her.

As for Jules (who is far from being reckless as his reputation suggests and has amassed the fortune his father lost only through very careful planning), he too is smitten, though it takes him a long, long time to recognize it. But he does realize that he wants to impress the startling Miss Vale, and once the house party gets underway, he spends an unseemly amount of time in Phoebe’s company, endangering his plans to marry Lisbeth.

Yet Jules is determined to marry Lisbeth. It so happens that Lisbeth’s dowry is the last piece of land that once belonged to Jules’ family. Because Jules cannot let go of that piece of land, and because there is no other way to obtain it than to marry Lisbeth, he believes that no matter how he feels about Phoebe, he can’t offer her a place in his life except as his mistress. But when Waterburn makes another wager, this one with the potential to damage Phoebe, things become complicated…

Several weaknesses kept me from loving this book. The foremost is the speed with which Phoebe and Jules fell in love (It happens within a day or two of their first meeting). It’s not that I don’t believe in love in first sight. I do. But to sell me on love at practically first sight in a book is exceptionally hard, and in this case I wasn’t sold.

As a consequence, the falling in love part of the book felt rushed, and the result was that the chemistry between Jules and Phoebe seemed forced. While I very much liked Phoebe and very much liked Jules, I just didn’t care all that much about the two of them as a couple. And since I felt detached from the fate of their relationship, I wasn’t all that engaged in the narrative.

Another problem was that despite Phoebe’s thoughts about how people are more complex than surface appearance would indicate, but for two or three exceptions, the side characters came across as flat. There’s not much depth to Lisbeth or such members of the ton as Waterburn, d’Andre, and the Silverton twins. Sophia Licari, who was such a memorable “other woman” in The Secret to Seduction, makes an encore appearance here but shows little of the facets that made her so interesting in the earlier book.

Jonathan Redmond does show a glimmer of depth, and Olivia Eversea is as intense as ever. The most interesting side character to me, even off stage, is Lyon Redmond, but I think that has a lot to do with his terrific portrayal in I Kissed an Earl and the fact that ever since I found out his reasons for staying away from Olivia, I’ve been dying to see more of him. Alas, he does not actually appear in How the Marquess Was Won, nor does his sister Violet.

I don’t recall reading about Lisbeth, a Redmond who is cousin to Lyon, Violet and Jonathan, before this book. It’s possible I did and I just don’t remember. In any case, I think I would have felt more invested in the triangle between Phoebe, Jules and Lisbeth if I had remembered Lisbeth from earlier books or if she’d been a Redmond sibling. It is hard to have much sympathy for her, and while that makes it easier to root for Pheobe and Jules, it also makes the central conflict feel less significant.

For example, a scene in which Jules and Phoebe are nearly caught kissing in the woods dragged instead of riveting me. In addition, Jules’ determination to marry Lisbeth at all costs did not seem in keeping with his perceptiveness. It was easy for me to see through Lisbeth so I felt he should have been able to do so sooner. I understand that Phoebe’s background was unsuitable for a marchioness but surely Jules could have found another well-born girl to engage himself to, one who was more tolerable than Lisbeth. Yes, Lisbeth had the land he wanted, but she was so clearly not a match for him.

Perhaps because I was less engaged in this book than in earlier ones in this series, I found the anachronisms more glaring. I was able to gloss over some of them, but one in particular stood out: a botched waltz between Jules and Lisbeth starts a fad reminiscent of disco. Some readers may find this cute, but I was pulled out of the story each time the fad was mentioned.

It may sound like I didn’t enjoy or appreciate anything about this book, but that would not be true. I appreciated that the prose was as usual, much above average, with many lovely turns of phrase. And I enjoyed, albeit mildly, getting to know Jules and Phoebe. Each was sympathetic and appealing, Jules careful and methodical in his focus on keeping his promise to restore his mother’s dowry to her family, Phoebe at once young and filled with wonder yet clever, crafty, and also careful, in her own way. Both guarded their hearts and had no one to whom to “surrender their cares” which made me want to see them find happiness.

I just wish I could have felt more invested in Phoebe and Jules’ romantic relationship. Because I didn’t, much as it pains me, I cannot grade How the Marquess Was Won higher than a C/C+.