REVIEW: His Risk to Take by Tessa Bailey

I enjoyed your debut book, Protecting What’s his, quite a bit and I was told that this novella would feature a hero cut from the same dirty talking clothe. They weren’t wrong, but this novella suffers from length related problems. Troy Bennett is a homicide cop for the NYPD, recently transferred from Chicago where he suffered the loss of his partner. He’s immediately taken with Ruby Elliott who comes in to a bar he’s at. 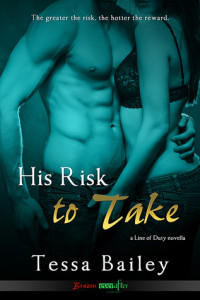 Ruby makes money by hustling at pool and while this is presented as a dark criminal enterprise, I guess I don’t see it. She goes in to bars and people assume she isn’t very good at playing pool and she schools them and takes the money they freely bet. I didn’t see one instance in the book where she pretends she is bad at pool. But the conflict necessitates setting Ruby up as a criminal to conflict with Troy’s upstanding citizen role. And because of the novella length, this conflict is easily resolved.

The sexy times and the tone of the story is the same as the previous one, but it just didn’t mesh as well and I think it’s because of the speed at which the story proceeds due to the shorter length. I felt that the immediacy of their sexual playfulness didn’t match their emotional interaction.

Troy likes to call the shots in and around the bedroom, but I felt like he was too demanding too early; that he didn’t give Ruby (or the reader) time to accept his naturally dominating nature.  Again, because this set up worked perfectly fine for me in the previous book, I think it has to do with how quickly the two had to develop this intimacy.

Also, surprise, surprise, heroine does another really foolish thing at the end. I wish women in danger acted with a little more sense of self preservation. Get a gun, take some self defense lessons, etc. etc. If you are going to live in a dangerous world, eschewing the help of others, then you need to learn to take care of yourself.

In sum, this book is a quick and sexy read but with problems that were endemic to the length of the story.  And it’s not that I don’t think that novellas can’t feature a dirty talking dominant, but only that in this book it didn’t work as well as I would have liked. C+