We are back with hockey! Yay! I wasn’t a fan of our walkabout to the tavern and then to Ireland and I really didn’t like the playboy hero of Breakaway. The male protagonist, Esa Saari, is a long time member of the NY Blades. Esa is from Finland and has been enjoying all the fruits of his pro hockey labor including, or particularly, the women. His life is suddenly changed when his sister dies and he becomes the guardian of his eight-year-old neice, Nell. 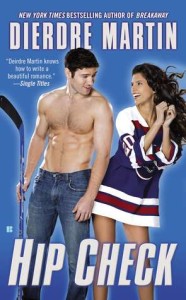 Esa’s contract is also up for renewal and he’s trying to play the best hockey of his life to ensure a big contract with his current team. He doesn’t really have the time or interest in parenting. His plan is to throw a lot of money at the Nell problem. Fortunately for him nanny extraordinaire becomes available. Michelle Beck has been a live in nanny for years and she is very good at what she does, so good that she has the option to turn down jobs. Initially Michelle isn’t interested in serving as Esa’s live in nanny but the money that he throws at her as well as Nell herself, causes Michelle to change her mind.

Michelle’s role in the story is primarily the home enforcer. She sets down rules (which Esa conveniently ignores) and takes her job as a nanny seriously. Michelle really loves the kids she cares for, often more than the actual parents. Esa comes off as a self absorbed jerk in the beginning because while he is willing to house Nell, he isn’t ready to love her and he isn’t willing to give up his bachelor lifestyle.

Michelle basically blackmails him into pretending to be a better person for Nell (as in, if you don’t follow my rules, I’m bailing on you). Esa’s transformation from freewheeling bachelor to serious father figure was a little hard to swallow. The emotional conversion seems to happen because he falls in love with Michelle. That’s probably the real crux of any fantasy – that true love can change your perspective. I wasn’t entirely convinced that Esa wouldn’t miss the constant buffet of female companionship either at home or on the road just because he likes how Michelle has made a home for him. It was entirely too convenient for him to fall for the mother figure.  But he does make the transformation and he does appear to be trying to adjust to his newfound Dad position.

What was believable was Esa’s attempts to seduce Michelle and her capitulation. They were too attractive people with a common interest in making Nell happy and their constant proximity made the after dinner period fraught with sexual tension. Michelle, however, seemed too ready to expose Nell to the fairy tale of the three being a family even though Esa’s ability to commit to even a regular dinner at home was problematic.

It’s not that I didn’t enjoy the fairytale story of the playboy bachelor being domesticated by the mom figure and creating a family unit with his sister’s daughter. I did feel that Michelle and Esa’s personalities were a good fit. Esa never had a stable and loving home environment and Michelle provided that for him. Michelle got to move from live in nanny to actual motherhood and she didn’t need to leave her charges behind. But the emotional connection I had with the characters was faint and the character arc, particularly for Esa, felt too easy and superficial. Michelle’s character was far more static. She fell in love with both Nell and Esa fairly early on despite her strict interpersonal rules and she just rode the tide to it’s ultimate conclusion, although there were rocky moments. C