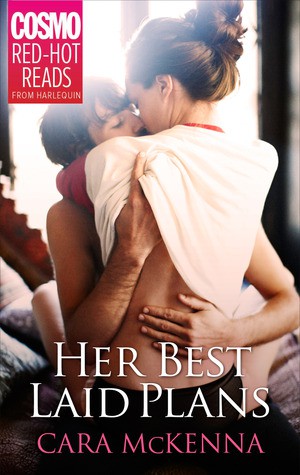 During a vacation around ten years ago, I observed a couple of teenagers beginning a flirtation in the hotel pool. It made me wistful for those unexpected, thrilling crushes of adolescence, those miniature relationships that sometimes happened when two strangers around the same age wound up in the same place for awhile. Although the main characters are adults — thank goodness! — Her Best Laid Plans captures the pleasure of that experience, and let me enjoy it vicariously again.

Jamie is disappointed in her first night in Ireland. After putting her life plans on hold for years for her boyfriend — and then getting dumped — she’s now yearning for adventure and cute Irish guys, but the only pub she can find is full of men her dad’s age. Then as if on cue, a gorgeous young bartender named Connor takes over the bar, ready to listen to her tale of woe:

‘I hope you’ll find the young men of Ireland sympathetic to your plight.’
She laughed. ‘I hope I’ll be able to find any young men on this trip, period.’
Connor looked demonstrably to either side and then down at his own chest, and held his arms out in mock surprise to say, Behold, a young man, at your service!

As Jamie psychs herself up to take advantage of this “made-to-order vacation fling,” the language of the story continued to evoke the thrill of the unexpected youthful romance:

“The excitement and the possibility, the newness… it charged her, thrumming as surely as the bike between her legs.”

“It all felt so tenuous, like a middle school crush. She had to remind herself, I could probably have him if I wanted to.”

“…why did she feel fifteen again, dizzy from a guy’s touch?” And Connor, we learn, has similar feelings: “I’m some skinny kid again, trying not to make an arse of myself with a girl.”

His apartment looked just right. Not sophisticated, but not immature. Suspended between the two, just as she was herself.

Mind you, this is most definitely an adult story. Things heat up fairly quickly and then stay heated (within mainstream romance limits.) But I was less captivated by the most passionate sex Jamie and Connor engaged in than by their first provocative teasing of each other, over a game of snooker:

‘Would you fancy making this a bit more interesting?’
‘How so?’
‘Friendly wager?’ Flirtatious wager, to judge by his tone.
‘How much?’
‘Name your prize.’
She thought a moment. ‘If I win, a glass of your finest whiskey. On the rocks.’
‘Fair play.’
And if you win?’ She leaned in, cocking the cue along her thumb and knuckle.
‘If I win… if I win…’
His fingers drummed the table’s ledge until Jamie raised her eyes.
‘Your finest kiss,’ he said with a devil’s smile. ‘On the mouth.’

‘You deserve a taste of this yourself, for saying so.’
He eyed the bar, finding his customers placated. ‘You’re a bad influence.’
She shrugged and took another sip. The whiskey was making her feel bold in the most natural, essential way.
Connor nodded his surrender. ‘Fine. That’s top-shelf — I won’t say no.’
With a smile, she took one more generous taste, than rose on her tiptoes. He caught on just in time, leaning in to bridge the gap. Their noses brushed first, then their lips. She held the glass between them, one of his shirt buttons teasing her knuckles — a strange and perfect little intimacy. A different sort arrived as their lips met, the contact rocking through her with a sharp, hot bolt.
All at once woozy, she kept it brief — just enough of a kiss to let him taste her winnings, then she dropped back on her heels.

The downside is that nothing that followed was as delicious as that initial kiss. Their physical relationship continues to be almost dully perfect: Jamie rhapsodizes that it’s like they already know each other. From her point of view that’s great, but we’re not learning much about them as people, or as a couple, though the sex — and since it’s a short, steamy novella, there isn’t much place else to put characterization or depth of emotion. The only conflict is the limited amount of time they have before Jamie’s return to Boston — although you could argue that Jamie’s reluctance to once again get sidetracked by a man is also a conflict. In any event, I never felt very invested in their sexual relationship; I liked both characters and appreciated how their story eventually worked out, but there was no compelling reason to care all that much that they were getting it on.

At its heart this is a story about new beginnings — even the ending is a beginning. It didn’t have a whole lot of punch to it otherwise, but that aspect was just right.  C+