I read and enjoyed “Her Inheritance Forever,” the second book in this “Texas Star of Destiny” series last autumn. I remember liking the fact that you showed a slightly different view of Texas history than I’d read before and also that the heroine was Mexican. This time around the German settlers in Texas provide the heroine and the Quinn family again takes part in the battles that determined the state’s history. 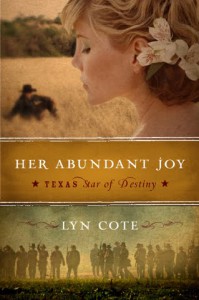 Texas Ranger Carson Quinn finds a group of newly arrived German immigrants when he and his friend Tunney arrive in Galveston, Texas. It’s obvious to the Rangers that they don’t have a clue how to go about getting to the land which has been bought for them to settle. Taking his oath to help the people of Texas, whether old hands or new arrivals, seriously, Carson decides to help them get there since he’s headed in that direction to join his family.

During the journey, he can’t help but notice beautiful Mariel who often acts as an interpreter for the group but whose situation is tenuous. Her employer is abusive and the other immigrants seem only to willing to believe his lies about her character rather than believe this young woman who’s alone in the world.

After meeting up with the Quinns and reaching New Braunfels, Mariel’s position becomes impossible when she’s faced with a marriage of convenience to save her reputation or becoming an outcast among the Germans. When Dorritt Quinn offers her a place at their ranch, Mariel jumps at the chance especially as she and Carson have begun to grow closer over the journey. But when the Rangers are called to aid the US Army sent to fight the Mexicans who object to the Republic joining the United States, will Carson survive the second set of battles he fights for Texas?

Even though this is book three of the series, readers don’t need to have read either book one or two. It starts in media res but the stage is soon set, the players are introduced and the action begins. I like that the returning characters stay the same. Well, the same but 10 years later. It doesn’t look as if anyone’s had a personality change just because the plot demands it.

Again I enjoyed a different presentation of Texas history as I can’t say I’ve read any historicals about German settlement in Texas. This part is okay and good for showing the kind of caring and leading man Carson is and how his family react to Mariel and the injustice done her by gossiping settlers. It seems true to probable historical realities – she’s a servant and a woman so the word of others would be taken over her. I had hoped to see more of the German settlement, how they began their lives over and their dealings with Comanche but…not to be.

The Quinns are fine, upstanding people, salt of the earth, always understanding and never wrong. There’s never a harsh word, they never letting anger rule them, they’re class and color blind, and practically perfect in every way. Unfortunately it makes this rather bland to read and hard to believe. Carson’s view that good men have to be the law and make the law out on the frontier seems more likely. His slow realization that he’s tired of killing, tired of war and being a man of war, even if that is what’s needed, seems more realistic.

The battle scenes are somewhat confusing and truncated. I’m still not sure what really happened but then a detailed description of the war isn’t what book is for – it’s more to show how it impacts this group of people and I guess they would only see their small part of it as the gunsmoke drifts and the cannons boom in the distance. Given the number of people to care about who were on or near the battlefield, it would be foolish to think someone wouldn’t die but I was sorry to lose the one to go.

Mariel changes a great deal over the course of the story. She starts as a cowed woman and servant but slowly becomes a stronger woman, a woman of Texas. But as with most of the Quinn family, she’s almost too perfect. And honestly, the separation at the end felt tacked on and for what? I knew it couldn’t go anywhere or be drawn out in the short amount of time left so … why bother?

Carson is a man you don’t mess with but one who is also decent and fair. I enjoyed his conversations with his cousin-in-law, who is also an interesting character. Niven got what he wanted in his wife but might discover she’s not what he wants after all. And though the characters are inspired by their faith but this isn’t something turned preachy or rammed down a reader’s throat.

My question at the end of this book is will there be a fourth entry in the series? Perhaps one with Erin facing the troubles Dorritt feels are looming on the horizon? Though this book didn’t work quite as well for me as “Inheritance” did, I’m still glad I read it and got to learn a little more about Texas history.