I was first introduced to your work with Four and Twenty Blackbirds, your Southern gothic debut. I remember liking it but for some reason, I never picked up another book by you again. It happens. So when I saw this book pop up on NetGalley, I glanced at your backlist and was shocked to discover how extensive it was! Time passes fast. Upon realizing that Hellbent was the second book in a series, I tracked down the first book Bloodshot (which I talked about briefly here) and liked it enough to give this one a go. 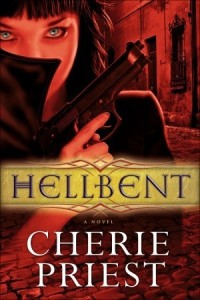 Raylene Pendle is a vampire who makes a living as the thief known as Cheshire Red. She’s lived a long time and is good at what she does — so good that many people think Cheshire Red is actually a man. After the events of Bloodshot, the normally solitary Raylene has picked up some friends: the blind vampire Ian Stott and the ex-Navy SEAL turned drag queen Adrian deJesus.

In Hellbent, Raylene is recruited to steal a very strange set of magical artifacts. Unfortunately, a brilliant but mentally unstable sorceress also wants them for her own purposes. And when she gets them first, Raylene will have to contend with the woman’s greatly amplified powers to get them back.

At the same time, Ian has a political problem on his hands. Vampires normally belong to Houses. Raylene left hers decades ago after a falling out with the head of the Chicago house. (The head wanted Raylene to die for her, and Raylene disagreed.) Ian, however, never actually left. He went into hiding after losing his sight because as one of the potential heirs, such a perceived weakness would put him at a disadvantage and make him a walking target. But now the San Francisco head has died and people are looking for Ian. And because of her feelings for him, Raylene will do anything to dissuade him from leaving, even if that means dealing with the San Francisco vampire house instead.

I’ll be the first person to say that urban fantasy is a crowded subgenre. Adult, young adult, blending with paranormal romance, traditional fantasy with urban fantasy trappings, it’s everywhere despite the fact that I think the subgenre’s heyday is behind us. But despite all that, I found Raylene’s voice very refreshing. Anyone who’s read urban fantasy is used to the tough loner heroine with attitude and a chip on her shoulder.

And while Raylene started out a loner in the previous book, Bloodshot, she’s a different take on that archetype. She’s a loner because of necessity. While she can be tough, it has more to do with living a long time on her own without a vampire house to back her up and being competent at what she does. It’s not a front. In fact, the only lies she tells involve her valuing her solitary life and disliking all these people barging in on it. That’s obviously not true since she collects people and takes them in, just like the valuables and artifacts she steals.

The biggest thing that sets her apart, however, is her personality. Raylene is neurotic and has OCD. I liked that this played on the traditional folklore about vampires where to distract them, you throw rice at them because that makes them stop and have to count each individual grain. (Like how The Count on Sesame Street teaches counting?) It makes for an interesting character because Raylene is simultaneously overprepared and reckless. She likes planning for contingencies but ends up taking risks when faced with the actual situation.

I think it’s this trait of Raylene’s that made her interactions with the sorceress Elizabeth interesting. Once she realized Elizabeth had schizophrenia, she stopped being the rival Raylene needed to eliminate. Instead she became someone Raylene wanted to help. And if there’s something Raylene suffers from, it’s this unacknowledged desire to help.

For me, though, the main flaw of Hellbent is that the plot is divided between the stolen artifact storyline and Ian’s vampire house storyline. A part of me originally thought they would converge and I read on, interested in seeing how they would. Because that didn’t happen, I was left with a scattered impression. I liked the vampire house storyline because plots involving political intrigue are a favorite of mine. But Raylene jumping back and forth between that and the stolen artifact storyline weakened it for me.

I was surprised by the conclusion to the subplot involving Adrian’s missing sister. Maybe neverending series have conditioned me to expect mysteries to be drawn out for several books. That the question was answered in this installment was refreshing. Unfortunately, it also struck me as a little too convenient.

As for the relationship between Raylene and Ian, I still have problems wrapping my mind around it. I think I just never bought it in Bloodshot, so while I can see Raylene doing all this because he’s a friend, I have a harder time thinking of them in a romantic way. I don’t know if that’s intentional but I admit I find their interactions to be emotionally unsatisfying.

Adrian, on the other hand, I can’t get enough of. I don’t care what he does. I just want more of him. I am interested in seeing how his new connection to Raylene will impact their relationship in the future.

Overall, I do think Hellbent was a worthwhile read. Maybe not so much about the events that take up the majority of the book but rather the fallout and what it means for the future. I am curious to see how Raylene proceeds from here. C+

Previous book in this series: Bloodshot

→ Jia
Previous article: REVIEW: Love and Freedom by Sue Moorcroft
Next Post: REVIEW: Dance With Me by Heidi Cullinan