REVIEW: Heating Up the Holidays Anthology 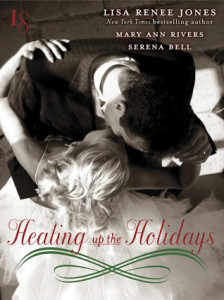 This contemporary anthology mostly delivers what the title and cover promise: romance and steam, against a winter holiday background. (Thanksgiving, Christmas, New Year’s.) The emphasis is more on the heat than the holidays.

Play With Me by by Lisa Renee Jones

Kali Miller isn’t happy about being attracted to her dynamic new boss, CEO Damion Ward; she has a bad history with powerful men, including her own father. But it turns out the attraction is very mutual and despite the inherent problems, she can’t resist the gorgeous man she senses has his own painful history. “I know we are headed for trouble, and I’ve had enough of trouble. But I have not had enough of him.”

I’m not especially into this type of set-up, and this wasn’t the story to change my mind. I did enjoy spotting some of the trope conventions, such as playing with the tall, dark handsome boss’s tie: “I grab his tie and slip it around his neck, pulling the knot for him, but I don’t step away when I’m done. I hold on to it like I want to hold on to him.” Kali has a strong voice (I wasn’t too thrilled when she used it to call someone white trash) and there’s some nice chemistry between the characters; the dirty talk and sex scenes hit a good balance for an anthology — blunt without being super crude, not at all coy but not over-the-top juicy-dripping explicit either. But much of the plot is a meandering business-related mystery with no payoff, and the end is absurdly abrupt. I’m not sure what the title means, and though this is supposed to be a Thanksgiving story, the connection to the holiday is tenuous at best. D+

This title is very apt: snow is a major player in this Christmas story, used as emphasis or metaphor.

One snowflake at a time, the pointy boards of the fence grow soft, the branches of the trees round with drifts, the patio furniture disappears into white and indistinct humps and caves.

One snowflake at a time for the world you thought [you] knew to transform.

That elegant thought comes during a moment of somber reflection; at a more emotional moment, the subtext, as Giles from “Buffy the Vampire Slayer” would say, rapidly becomes text:

The whole world should feel how dumb this snow is, how it covers everything up, how you can’t fucking see anything, how cold it is, how it stops everything, keeps people from living their lives, going to school, going to work, how it can hurt people.

The narrator is Jenny Wright, a microbiologist who technically still has twenty twenty vision, yet is peripherally going blind. The progression of her disability is uncertain, leaving her feeling stuck in limbo. She limits her life to small, safe areas; in occupational therapy, she’s herself at fourteen, rebellious and juvenile and completely unable to accept the idea of supports that would let her resume some of her former activities. (Or prepare for the coming changes.) A bright note in her day is her sexy “cybering” with C, a nearby stranger who would like to meet her — but Jenny can’t imagine trying to join someone in the now frightening world.

Then Jenny actually has her much mocked Helen Keller moment with her occupational therapist, Evan, and begins to start to think “that maybe, maybe that what made me me was possible to prove in a number of ways,” not reliant on being sighted. And her interactions with the formerly despised Evan become increasingly personal and affectionate:

As Jenny is drawn to the warmth and sweetness of Evan, she becomes increasingly dissatisfied with the limited relationship she gets from C. But she still has a ways to go in accepting the profound uncertainty of her life — of any life.

This is sort of a Christmas miracle story, but definitely not one about a miracle cure. (Though things are pretty much perfect for Jenny, in terms of having great occupational therapists available, and apparently fabulous insurance.) It rings very true about how it feels to have a progressive medical condition:

… the lack of trust, the sense that what you want is a moving target, the grief of disbelief that losing yourself is possible when you were doing so well.

And those who hate “for your own good” stories will be happy to know that Jenny’s disability is never seen by her or anyone else as a potential impediment to love.

But although I like so many of the pieces of this story, the romance never quite coalesced. Individually, Jenny and Evan are great characters. I love how Jenny describes her full figure: “Oh, also, my ass. Who knows where that’s ended up, exactly. It’s made its own fabulous place in the world.” And Evan is sweet and generous and just adorable:

I wonder if he practices making awkward and nerdy look sort of cool. Like he fills his house with furniture that is the wrong scale for his tall body and buys plaid shirts in bulk and tells his barber to leave crazy, too-long pieces of hair mixed in with the regularly cut hair so everything always looks messy.

But somehow Evan and Jenny together don’t quite work. He keeps painting her as breathtakingly smart and admirable, which was unconvincing; when he tells her, “You have a limited field of vision, you have vision differences, but all those brains, God, you showed us today that you’ll never ever fail to see,” it was such a cliched Hollywood tearjerker moment that it became hard for me to take him seriously as a love interest. (Ridley’s excellent recent post and comments on “the disabled protagonist” made me rethink this scene: perhaps the intention is to show Evan’s lack of judgement of  what would usually be considered Jenny’s “bad attitude” toward her disability. It still makes me squirm.)

There’s some beautiful writing and some that feels self-consciously lyrical. The sex scenes — quite a few for a short novella — have an excitement and passionate energy to them, but the lack of romantic connection I felt kept them from completely drawing me in. B-

After Midnight by Serena Bell

After the introspective, sometimes poetic style of “Snowfall,” this story about instant attraction at a New Year’s Eve party initially felt jarring, and I thought the stories would have worked better in a different order. However, after a while this more conventional romance felt refreshing — like a cool, light dessert after a rich meal.

Nora and Miles meet briefly while both are on the rebound: Nora’s boyfriend turned out to be a cheater, while Miles’s fiancée deserted him when he was accused of embezzling. When they inadvertently part without exchanging names or numbers, even social media fails them. (In an amusing and all too plausible scene, Nora gets equal parts filthy propositions and slut-shaming abuse when she uses Facebook to try and find the man she kissed on New Year’s Eve.) Almost a year later, they’re given a second chance… but the painful lessons about trust they learned from their exes may finish them before they’ve begun.

Initially I didn’t get a strong feeling about who Miles and Nora are, other than that he’s attracted to her open joyfullness and she’s intrigued by his sad eyes. I was won over by them during their charmingly imperfect phone sex:

“What are you wearing?
“Jeans and a short-sleeeved T-shirt over a long-sleeved T-shirt.”
Silence
“I killed your libido,” she said.
“No. I was trying too hard to be funny, and my brain got knotted up.”

And no worries — they get it right in the end!

There isn’t a lot of conflict to the story, and what there is seems a little strained.  But it’s lively and has a nice warmth to it, and the New Year’s/new beginnings theme gives a satisfying feeling of conclusion to the anthology. C+

Overall, I’d say this hangs together thematically better than most anthologies do, and the stories complement each other well.  For the book as a whole, C+.