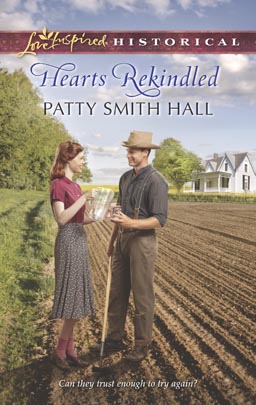 “I’m Here to See My Daughter.”

She never thought she’d see John Davenport again. Merrilee Daniels Davenport’s former husband has returned to their small Georgia town after fighting in the Pacific. And now the soldier is bearing a letter from the little girl he didn’t know he had. Merrilee wishes that she and her daughter could lean on John’s able shoulders, but her new assignment as a homeland informant won’t allow it.

Twelve years have only made Merrilee more beautiful in John’s eyes. Back then, he was the proud fool who walked away. Now all he wants is to prove he can be the husband she deserves, and the daddy his daughter needs.

I wanted to read this book for two reasons. One is that I’d read and enjoyed “Hearts in Flight,”the first book in the series about the female aviator. The other is more personal. Back in the height of the depression, I had a relative who was left with two children when her husband up and walked out on them. When I saw that this was the set up of this novel, I wanted to see how the story would play out.

Considering how much I usually dislike the trope, I was surprised to find myself reading along with what is basically one huge Big Mis. Merrilee loves John and he loves her but her daddy stands in the way. When daddy couldn’t get their youthful marriage annulled, he did all he could to grind sand in the Vaseline of their happy life. In the end he succeeded. What struck me as odd is that Merrilee and John took so long to figure out the final result of 2 + 2.

But, still I kept reading because it was nice to see two people at such odds who finally take the time to reason out what might have caused their marriage to end. There are sparks, there is still resentment there but instead of digging in deeper like a Georgia mule, instead the two listen and watch and begin to see that the other might have had reasons for the way things turned out. On their own – well, maybe with the tiniest of pushes from others – they see the good in and begin to forgive the other.

I did like the little touches which add to the feel and realism of the setting and era. Merrilee signals her truck turns not with a blinker but her arm out the window. The heat is not just mentioned but we see John mopping his forehead with a handkerchief even in the early morning. Miss Aurora’s house still has a hand water pump in the kitchen and is lit by lanterns. Black out curtains and making do are the order of the day. Shoe leather is worn out and one of Claire’s dresses is short due to her growth spurt with few options, due to wartime rationing, to replace it.

But I was puzzled about a few things such as …why is there no mention of President Roosevelt’s death, especially since they’re in Georgia and the book continues past when the war ends in Germany. Merrilee and John want to take Claire to Warm Springs so shouldn’t this event – which rocked the rest of the nation – have garnered a mention here? And so much attention was paid to mentioning ration books, short supplies, black marketeering that I wondered how did Marilee get her (second) wedding dress which has a long train? No mention made of how she got it or got fabric since rationing was still on or was it over so quickly after the war which had barely done in Japan by the time of the epilogue?

As well, the whole black marketeering angle of the book got lost and then swept aside with no resolution. Who was it? Or will that be resolved in another book? What about getting Claire the therapy her mother wants her to have? Or teaching her to swim to strengthen her leg muscles? Merrilee seems remarkably unconcerned about whether or not her home, on the verge of being foreclosed on by the bank, actually will be. Again, these things were mentioned and then left dangling in the end.

The book is saturated with references to the characters’ faith and how it sustains them, guides them and lifts them over troubles. I didn’t feel that I was being preached at but do feel that anyone who is not ready for a huge, heaping helping of Protestant religion should think twice before reading it.

One of the subplots is about John’s foster mother, Miss Aurora who has taken in unwanted children for years. Many of these children have what is now called Down’s Syndrome. Though John and Merrilee are both loving and accepting of the children and John actually had a brother with Down’s Syndrome, many in the town (all of whom are negatively portrayed) are not and some words they call the children and attitudes towards them might be triggers for readers.

So my feelings about the book are rather mixed. I enjoyed seeing two basically kind people find their way back to the person they never stopped loving. The period feel was fairly good with a few exceptions that left me with questions. However some plot threads seemed to dangle with no resolution. With all this to consider, I’ll have to give the book an overall C+