REVIEW: Hanging by a Thread by Sophie Littlefield

Your name’s been on my radar for a while now. Alas, I’m teetering on burnout when it comes to post-apocalyptic novels so I’ve consistently given your Harlequin Luna series a pass. This is no fault of your own. It’s all on me. But when I saw your new novel, a YA, on NetGalley, I decided to give it a go. Not post-apocalyptic and a standalone? Sign me up.

They say our house is cursed, and maybe it’s true. It’s been in my mom’s family for almost a hundred years. It was a dress and alterations shop until ten years ago, when my mom and dad poured all their money into restorations so we could live in it. As soon as it was finished, they got divorced and we all moved away. But that’s getting ahead of the story.

Clare and her mother have just moved back to Winston, the small beach town where she grew up. It’s a big change from San Francisco, but Clare’s looking forward to it. The drama and temperamental personalities at her old arts-focused high school had been wearing her down. 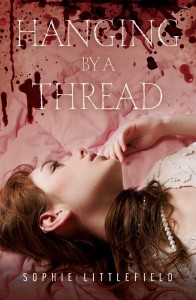 But a pall hangs over Winston. Two years ago, a little boy was killed over the July 4 holiday. One year ago, on the anniversary of his death, a popular cheerleader shared his fate. Now, the July 4 holiday approaches once more and anxiety fills the town. Parents want their children home and safe, for fear that a killer might strike again.

As the new girl, Clare wants to fit in and join the in-crowd. She has a good chance, given that her childhood best friend is one of the most popular girls at school. But when Clare finds herself attracted to Jack, a boy who’s definitely not part of the in-crowd, she finds that not only are her chances at popularity jeopardized, but the secrets of what happened the two previous July 4 holidays are about to unravel.

I found Clare to be a refreshing protagonist. In the paranormal YA genre, we’re so used to kick-butt heroines who fit certain descriptors: they fight hard, they’ve got sassy attitudes; they’re wholly independent and need no one. Clare isn’t anything like that. For one, she’s an aspiring fashion designer who likes making her own clothes. Sometimes she makes them from scratch. Other times she raids flea markets, yard sales, thrift stores, and the like for vintage gear that can be made new. She’s extremely talented and I liked that we had a heroine whose identity did not center on a special ability or her supernatural talent.

The women in Clare’s family have the gift of psychometry: they can access memories by touching clothing. An interesting ability to give a family in the sewing business, isn’t it? Even though Clare’s grandmother told her that the gift would go away if she stopped using it, Clare believes that the gift was given to her for a reason. No matter how small, she tries to make use of the things she learns and make wrongs right. Of course, that all changes when one of her thrifting runs yields a jacket that once belonged to the dead cheerleader.

I thought Hanging by a Thread was strongest when it explored the interpersonal relationships between Clare and other female characters: her mother, her grandmother, her best friend Rachel, the other girls who were her future classmates. The portrayals of the family struck me as particularly genuine. Familial relationships are complicated. Clare and her mother love and support each other but as with all things, it’s not 100% approval. Clare’s mother doesn’t want Clare to go to fashion design school, for example. Clare thinks her mother devotes too much time to work and needs to get out more. Clare is embarrassed by her grandmother’s eccentric reputation in town but adores the woman who encouraged her creativity and taught her about her gift. I loved these things.

On the other hand, Clare’s interactions with the male characters didn’t seem so fleshed out and at times lapsed into cliché. Of course the boy Clare rejects would claim that she slept with him and call her a slut. That outcome was pretty much telegraphed the moment Clare met Jack.

I was a little disappointed by the burgeoning romance between Clare and Jack. I liked that it didn’t hijack the narrative since the focus should be on Clare’s ability and investigation into the events of the last two holidays. But at the same time, I didn’t get a good handle on Jack’s character. Why did he go after Clare so hard and fast? Was it purely because she was the new girl and someone different? Someone who didn’t know his connection to the cheerleader who had died?

I thought the first half of the book was strong. It set things up wonderfully. But as I kept reading, I realized there weren’t a lot of pages left. I couldn’t see how the novel could wrap things up in the remaining space. And while the book did wrap things up, I definitely think the book could have used more pages to do the plot justice. Don’t get me wrong. I thought the plot and resolution was fine. But between Clare’s relationship with Jack and her strained friendship with Rachel, the emotional impact was lost.

While the second half of the novel didn’t live up to the first half’s promise, I found Hanging by a Thread to be a nice change of pace from all the other paranormal YA novels out there. I can always use more mysteries and thrillers in my reading life. Overall, I’d give this one a C+. But flawed book or not, it got me interested in your work and I’ll be checking more of your novels from now on.